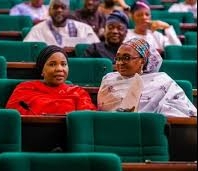 A clarion call for inclusion of more women in elective and appointive positions in the country was reiterated in commemoration of the International Women’s Day 2020 by female legislators under the group, Women in Parliament (WIP) Committee on Sunday in Lagos.

This was contained in a communique after a one-day retreat by the female lawmakers.

The group frowned at the decline in the number of women in appointive positions in Nigeria.

Commending the leadership of the Senate for deliberate inclusion of all female senators in the Constitution Review Committee, the group’s Coordinator, Taiwo Oluga further urged the House of Representatives to replicate same.

According to her, this would ensure that critical issues of concern to women could be brought to the attention of the committee in both chambers.

“Out of 469 members of the National Assembly, there are only 21 women; and women represent only 4.43 per cent of 991 legislators in the state Houses of Assembly.

“This act of political exclusion is no longer acceptable, Nigerian female legislators, therefore, call on their colleagues in the National Assembly and state Houses of Assembly to take drastic action.

“In the spirit of this year’s International Women’s Day (IWD), #EachforEqual campaign, we need to take intentional steps in the ongoing constitution review and electoral reform process to promote women inclusion in governance and politics through gender-specific provisions.

“WIP notes that the language of Nigerian laws is gender-biased and insensitive to women,” Oluga said.

She further mentioned that the constitution had gender insensitive words about 66 times and the Electoral Act about 68 times.

She urged the National Assembly Constitution Review Committee to review the drafting style by deleting the descriptive pronoun ‘He’ as presented in the constitution and replace it with ‘He or She.

“Changing the descriptive pronoun to he or she will promote an inclusive constitution that acknowledges women.”

He opined that the WIP was concerned about the lack of internal party democracy and political will to ensure women’s political inclusion and representation.

“We call on our colleagues to use the ongoing reforms of the Electoral Act and the Constitution to ensure that political parties adopt a quota system in their manifesto with women and men alternating (50:50) on its candidates’ list.

“For all elective positions, there should be an intermix of both genders, particularly positions requiring running mates.

“Only parties who are intentional about women’s participation will receive women’s votes in the 2023 elections, ” Abdullahi said.

The retreat was convened in Lagos by female legislators from across the country to review critical national issues, particularly as they affected women and children in commemoration of 2020 IWD.

The event also held out an opportunity to enhance the technical capacity of female legislators and design an agenda for improved political inclusion of women in politics and governance.