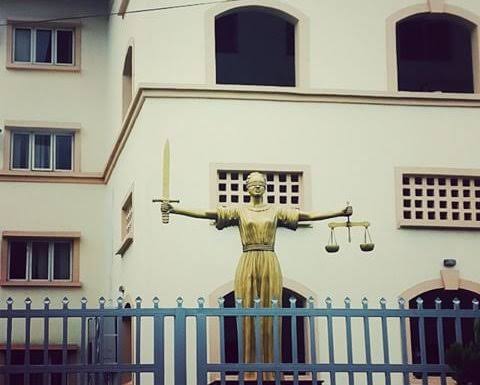 One 49-year-old Suleiman Mohammed who was accused of defiling and assaulting Rabiu, a 13-year-old boy has been remanded in correctional facility.

The defendant who is sight-impaired (blind) and a beggar was on Wednesday docked before Justice Sybil Nwaka of an Ikeja Special Offences and Domestic Violence Court in Ikeja.

At arraignment, the defendant was guided into the dock by an aide and arraigned on a two count charge of indecent treatment of a child and sexual assault by penetration.

The State prosecutor, Mr. A. O. Alagbe, explained to the court that the defendant had committed the alleged offence on September 15, 2018 at about 1730 hours at No. 33 Market Street Isale Oja Agege, Lagos.

Alagbe added that the defendant indecently treated and sexually assaulted the 13-year-old boy by penetrating his anus.

The lawyer holding brief for the State government said that the offences contravened Sections 135 and 261 of the Criminal Law, Cap C17, Vol 3 Laws of Lagos State 2015.
But the defendant informed the court that he has been blind for over 40 years and has two wives with seven children.

Trouble started for the defendant according to a police report dated September 19, 2018 when the victim’s mother complained to the Police at Isokoko police Station, Agege.

According to the report, “The complainant reported that, on that fateful day, she came home and met her son, Rabiu, with his younger brother on the bed covering themselves with a cloth.

“When she drew closer to them and removed the cloth, she discovered that Rabiu’s penis was erected and she shouted out of shock.

“She thereafter asked her son who taught him what he was doing and the boy replied that one Mohammed (defendant), usually puts his penis into his anus and gives him money afterwards.

“The boy told his mother that the incident happened when he went to drink from the tap and the blind beggar called him into his room, while speaking Hausa language.

“The boy said that when he came into the room, the suspect removed his clothes and began rubbing his penis all over his body before inserting it into his anus.

“The boy further told his mother that the blind beggar gave him N100 afterwards. He also said that the suspect, so far, had given him a total sum of N400”.

Justice Sybil Nwaka thereafter adjourned the matter till May 12, 2020 for commencement of trial.