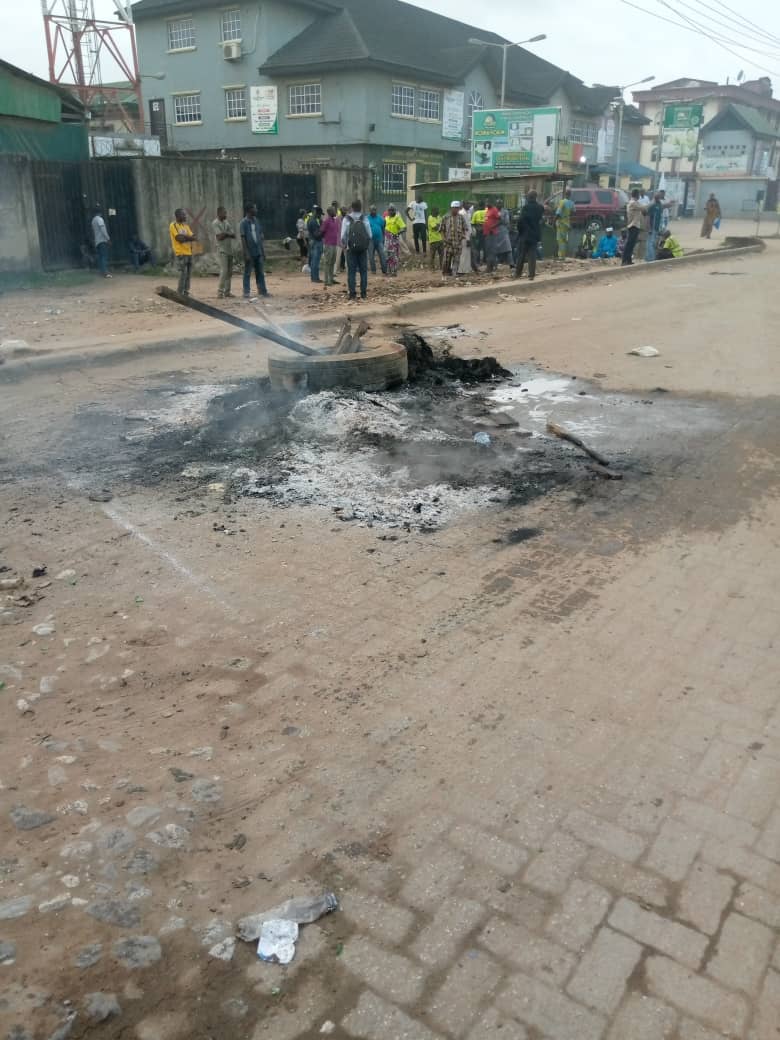 Readers discretion is advised as the story contains image that may be offensive.

It was a bloody Wednesday in Lagos as no fewer than 50 persons, some truck drivers included were fatally injured while many trucks and shops were torched, and looted when heavily armed thugs invaded Vinager and Abule-Ado areas in Satellite town, Lagos.

Residents of the area fled for their lives to adjoining Festac town and Mile 2 even as business activities were paralyzed as a result of the incident in the densely populated area which led to the temporary closure of banks and other business interest.

It was gathered that trouble started very early on Tuesday morning when the armed thugs said to have been recruited from Benin Republic by a suspected terrorist gang with base at Oguntade village in Old Ojo road, Satellite town, invaded shops and residential areas demanding money forcefully from people.

According to eyewitness report the thugs were heavily armed with sophisticated weapons were shooting sporadically to scare their targets mostly, truck drivers.

It was gathered that the thugs succeeded in breaking into homes and carted away valuables after which they subjected their victims to thorough beatings.

Unconfirmed report has it that some people who tried to rein their attacks were shot while others were seriously wounded.

The thugs were said to be masked also made burn fires with used tyres while at the same time attacking truck drivers who refused to be extorted and damaged their vehicles.

A victim of the pandemonium, Ibrahim Muhammed told journalists that they attacked them where they parked their trucks midnight on Tuesday and started demanding for money.

He narrated that the thugs are members of a notorious gang that have been unleashing mayhem in Vinager, Abule-Ado and Mile 2 areas for long time.

“They clashed with truck drivers who were carrying out their legitimate businesses in Vinager last week and wounded many of us.  Some of our members were also killed during the clash when we resisted their attempt to forcefully extort money from us. They have been doing this for long and all efforts to make the police help us have failed. Their major target are members of the National Union of Petroleum and Natural Gas Workers, NUPENG, and they have made life very difficult for us all.

“We have lost millions of naira and many trucks each time they struck. They are laws unto themselves and they boast openly that nobody including police and army can stop them from extorting, looting, maiming and killing people in the area. They attack with all kinds of dangerous weapons including stones which they carry in wheel barrows and bottles,” he said.

A reporter with The Guardian who visited the area around 3.30 pm reported that “the whole places were deserted while shops and business outlets remained closed. Many truck drivers abandoned their vehicles and took to their heels while major roads were blocked with burn fires still smouldering. Skeletal police presence was noticed from a distance while efforts to speak with few people seen hidden in make-shift shops failed.”

A team of policemen from Satellite division were said to have come to the scene when the thugs were carrying out the operation before they left due to unmatched superior fire power of the thugs.