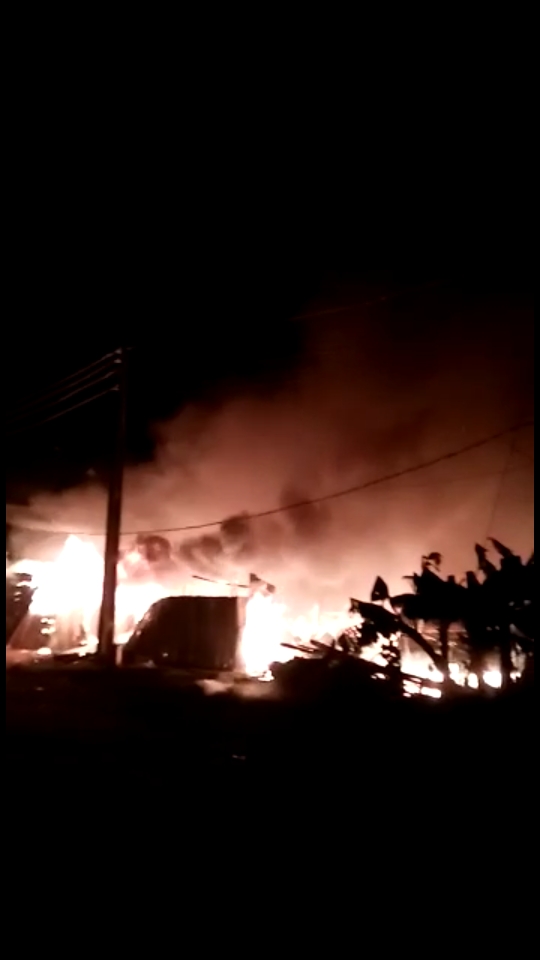 There was a fire outbreak at 7th Avenue, in-front of J close, opposite the police post, Festac Town, Lagos State.

The scene of the fire is where over 1000 Square meter  empty land is occupied by different squatters from various nationalities in Nigeria mostly Northerners.

Reports say the fire started at 2.10 a.m and the cause of fire has been traced to a generating set.

The incident was said to have received responses from some residents of the community and the men of the Federal Fire Service, Festac Town.

The Fire Service men responded to the incident as they came in successions to put out the fire  with their trucks marked  with registration numbers FFS-54  and LA 150 A40 respectively.

The Fire Service trucks were each led by DSF Owana and Akoteyon Sunday from Lagos State Fire Service, Ojo LGA.

The fire was put out at 3.25 a.m, however the materials which the shanties were made off were highly inflammable and frantic efforts to save properties proved abortive.

Comrade Ayodele Adewale, the immediate past executive Chairman of Amuwo Odofin Local Government, was one of the callers at the scene as soon as one of the residents, Mr. Sylvester Ojegba, called him while he called the Lagos State emergency number 767 to report the incident.

Comrade Adewale also called Head of Lagos State Emergency Management Authority, LASEMA, Dr. Femi Oke-Osanyintolu, the Divisional Police Officer, Festac Police Station and other disaster management agencies for support.Also Hon. Adewumi Ogunshina and Mr. Tony Babaniyi were also among the callers who visited the area at 7:20 a.m again to get an assessment of the disaster scene, to speak and empathize with residents who had lost properties.

No life was lost in the inferno.