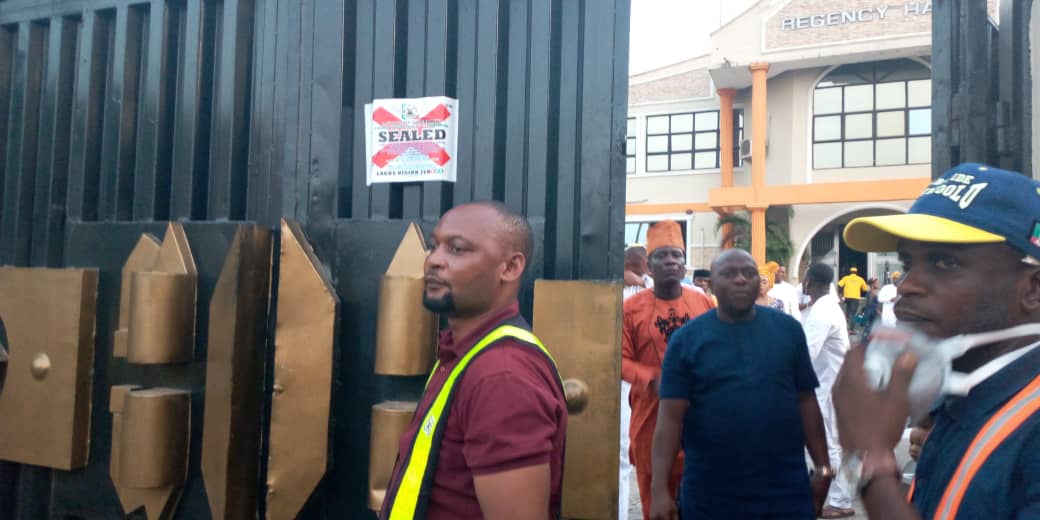 Worried by growing cases of the deadly Coronavirus in the state, Governor Sanwo-Olu had on Friday banned public gatherings of over 50 people in the state as part of measures to prevent the pandemic.

The governor had also warned religious bodies, families, residents, academics, professionals and other categories of residents in the state to desist from gathering numbering above 50, saying that the law enforcement agencies would be deployed to ensure compliance.

But speaking during the enforcement of the governor’s directives, the General Manager, LASEPA, Dr. Dolapo Fasawe and the Director-General Lagos State Safety Commission, Lanre Mojola, who led the enforcement team, said that safety of Lagosians is paramount to the state government.

Among the areas visited, according to her, included, a film house at Lekki, Shoprite, Balmoral , federal palace, the dome and , amongst others.

She added that enforcement also sealed Regency, Maltinos Event & Suites and Imperial at Jobi Felle, Ikeja as well as Prime Mall Mega Plaza in Lekki, where a surprise party was to be held.

Speaking on the enforcement, Dr. Fasawe said that the enforcement team swung into action in with compliance governor’s directive, saying it was gratifying that most event centres complied with the directive while a few failed to.

She said: “The banning of public/social gathering by Mr. Governor became imperative to save our dear state and prevent our people from contacting the virus. CONVID 19 has become a global pandemic, therefore serious measures such as this must be taken to reduce the spread and further stem the outbreak of the pandemic .

“It’s advisable, we adopt social distancing, by keeping at least six foot distance between ourselves and others to prevent transmitting the virus seamlessly. For now, let us avoid crowds and large gatherings such as weddings, concerts, sporting events, conferences and so forth. We are not unmindful of the implications of the restrictions, but it is crucial we collectively limit and control the spread. Lagos State is not in isolation, it’s a global pandemic, therefore, this strong efforts to suppress and push it back for the safety of all’.
She emphasized.

According to her, the inspection and monitoring exercise was not to impose hardship on them but to assess the compliance level, educate the public on the need to obey and ensure total compliance. ‘We appeal for understanding and support of all and sundry at this time. We should continuously keep our environment clean, watch our hands and avoid unnecessary contact with people.

On his part, the DG Safety Commission, Lanre Mojola, expressed satisfaction with the monitoring exercise and enjoined the public to support the government in its fight against the menace. He said the war on the deadly virus could only be won if everyone obeys a simple directive and avoid actions or activities that could put everyone at risk.