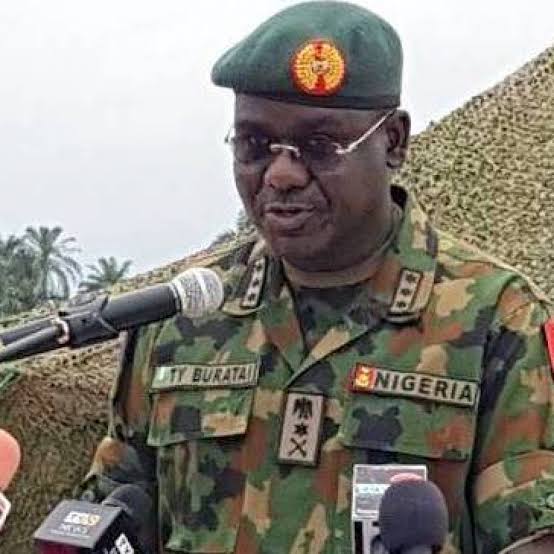 The Nigerian Army is joining the fight against the spread of Coronavirus by complying with preventive measures being implemented nationwide as part of efforts to protect not only the civilians but officers and their families in various cantoments and barracks in response to the directives of Chief of Army Staff Lt. Gen Tukur Yusufu Buratai.

In a statement made available to journalists, the army said that the Nigerian Army is not resting on its oars, as it is intensifying preventive measures against the spread of the dreaded COVID-19 across the barracks in Nigeria.

The statement stated, “For instance, the Headquarters Nigerian Army Medical Corps Victoria Island Lagos in compliance with the directive of the Chief of Army Staff Lt. Gen Tukur Yusufu Buratai has since taken proactive measures against the dreaded virus.

The medical personnel in Bonny cantonment have intensified the medical screening of personnel and individuals going into or coming out of the cantonment by checking temperature and making sure individuals wash their hands in order to effectively checkmate the spread of the disease into the barracks’ community.

Wash hand basins, hand sanitizers and soaps have been positioned at suitable locations at the entrance of the cantonment to ease or ensure compliance.

While inhabitants and visitors to Abakpa cantonment Enugu and 82 Division Headquarters complex along Abakaliki Road are also being screened by medical staff from the Division’s hospital, there are also indications that drastic measures have been emplaced to restrict access to mammy market in the barracks in order to prevent the spread of the virus.

At Adekunle Fajuyi cantonment housing 2 Division Nigerian Army, there is noticeable increase in medical checks at the two major gates leading into the cantonment. Thermometers and hand sanitizers with the requisite medical staff from the Division’s hospital are reportedly in position and available to soldiers, their families and necessary visitors into the cantonment.

The situation is the same in 81 Division Lagos where the medical personnel are strategically positioned at the main gate entrance to the headquarter’s complex to screen personnel getting into the building.

An interesting major effort by the Nigerian Army is the directive given to the tailoring arm of the service to start the production of the required masks for officers, soldiers and their families. This is due to the scarcity of the product in the open market especially in Ibadan and environs.

In addition to implementing or enforcing the directives of the Chief of Army Staff, – all Army Commanders have also initiated measures to prevent the spread of the deadly threat into their respective barracks and other locations.

Measures such as personal hygiene, hand- sanitization, online correspondences and social distancing are strictly being enforced and observed from the army Headquarters down to units and formations levels across the country.

Generally, there are feelers that teams of medical experts and military police have been mandated and have since been going round the Army Barracks and cantonments in the country to ensure that the outlined preventive measures are being implemented in line with the desire of the Chief of Army Staff.