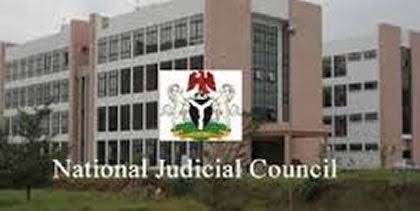 The National Judicial Council, NJC, has recommended the immediate compulsory retirement of Acting President of the Customary Court of Appeal Imo State, Chukwuma Francis Abosi and a judge of the Bauchi State High Court, Aliyu Musa Liman for engaging in age falsification and withholding of judgement respectively.

This information is contained in a statement by NJC through its spokesman, Soji Oye.

Abosi was said to have altered his date of birth from 1950 to 1958 to beat his actual retirement year of 2015 when he originally attained the mandatory retirement age of 65 years.

While Liman was said to have withheld judgement in a case, marked: BA/100/210 between Abubakar Isa and Sheik Tahir Usman Bauchi, for almost four years, as against the three-month period provided by the Constitution.

Meanwhile, the NJC at its meeting held between April 22 and 23 this year has constituted a 10-member committee to work out ways courts could safely conduct proceedings despite the current lockdown and other measures to be put in place to contain the spread of the novel coronavirus in the country.

The committee, which has 14 days to conclude its assignment, has as Chairman, Justice Bode Rhodes-Vivour (of the Supreme Court).

Also at the meeting, the NJC recommended the appointment of 70 new judges for both Federal and state courts as President of Court of Appeal, Grand Kadis, President, Customary Court of Appeal and Judges of High Court of States and the Federal Capital Territory and Kadis of States Sharia Courts of Appeal.

The NJC equally referred eight lawyers to the Legal Practitioners Disciplinary Committee, LPDC, for prosecution in relation to allegations of professional misconduct.

On the two sacked judges, the statement said: “Hon. Justice Francis Chukwuma Abosi, was recommended for compulsory retirement following the falsification of his date of birth from 1950 to 1958.

“Findings showed that he was supposed to have retired in November, 2015 when he clocked the mandatory retirement age of Sixty-five (65) years.

“Council decided to recommend for his compulsory retirement to Governor Hope Uzodinma of Imo State and to also deduct the salaries he had earned from November, 2015 to date from his retirement benefit.

“Hon. Justice Aliyu Musa Liman was recommended to the Bauchi State Governor, Bala Mohammed for compulsory retirement pursuant to the findings by the Council for his failure to deliver judgement in suit No BA/100/2010 between Abubakar Isa and Sheik Tahir Usman Bauchi within the three months period stipulated by the 1999 Constitution of the Federal Republic of Nigeria.

“Meanwhile, the National Judicial Council, in the exercise of its disciplinary powers under the 1999 Constitution of the Federal Republic of Nigeria, as amended, has suspended Hon. Justice Francis Chukwuma Abosi and Hon. Justice Aliyu Musa Liman from office pending the approval of the recommendation of the Council for his compulsory retirement to their respective state Governors.