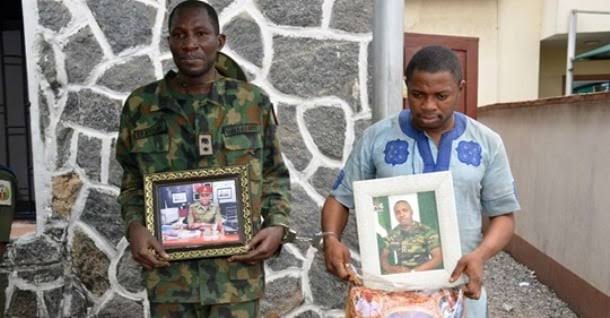 The suspects were paraded on Thursday before newsmen at the Nigerian Army 81 division headquarters in Lagos.

While parading the suspect General Commanding Officer, Nigerian Army 81 division, Major General, Olu Irefin, said this is the third time in a row now we are having this sets of imposters and I think one thing the lockdown as done for Lagos State is that our Operation Check Me that is initially meant to check our soldiers breaking the law is yielding more result than we planned for.

“Today, we have 13 imposters that are paraded before you with different ranks from Lieutenant Colonel, Major, Captain and others were arrested at different lactation for various offences.”

According to him, “You will be shocked at which level they are impersonating, both the Lieutenant and the Major have a photo frame they used in deceiving members of public and when you check their internet profile or page they looked real as military personnel.

“They have used provost letter head paper to apply for visa but unfortunately they took a wrong channel of applying because we don’t do it directly for military to apply visa.”

He stated further, “That is the problem we are having in Lagos and when this people create any problem within Lagos and Ogun they will say it is the  Nigerian Army.

“I want to use this medium to appeal to law and abiding citizen and to other security agents that on any occasion when they see soldiers they should ask for their Identification Card (I.D) and where they are in doubt they should make contact and we will make arrest.

“All these arrests you are seeing was based on information and Operation Checkmate that is currently ongoing and we will continue to do this operation to clean Lagos and it environs of this kind of hooligans.”The suspects were identified as Ebenezer Adeleke, Afolabi  Hassan, Allen Afolabi, Daramola Olamide, Akpan Joel, Eze David, Frank Eze, Joseph Okere, Ahmed Ameh and Akpan Emmanuel.

One of the suspect, Afolabi Hassan, 45 year 19 Clem Road, Ojokoro, Lagos said he was arrested by a team of soldiers in Abule Egba area where he lived.

He said, “I received a call from someone that they wanted to purchase land, when I got there, it were soldiers and they asked to take them to my house where they discovered the photo frame and other exhibits that I used to perpetrate the crime.

“I was once a soldier, I was a dismissed Corporal in 2016 with N0. 96NAW43 when I went on AWOL (Absent Without Leave) bought the uniform and the rank of Lieutenant Colonel from someone in Abacha Barracks in Abuja. I usually used the uniform to escort trucks with goods from Mile 2 to inside Tincan where they paid me N80,000 per trip. I used N50,000 to settle police, Road Safety officers and other security agents. I used the remain N20,000 or N30,000 to take care of myself and family.”