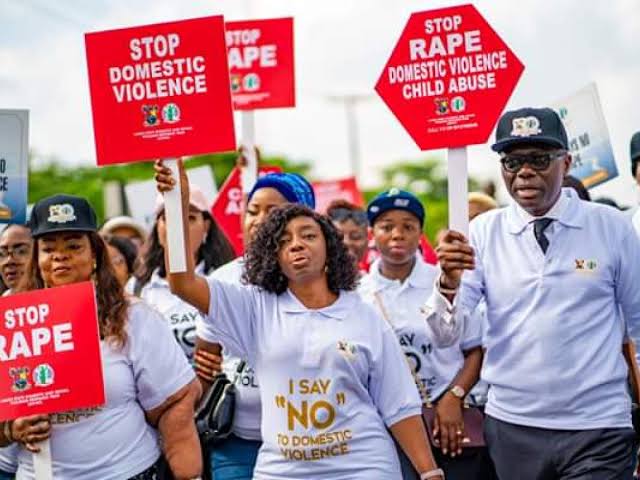 It’s worse off in lockdown when government shrugs off domestic violence in peace time. As COVID-19 germ changes the crime and its responders globally now, Nigeria might still remain the same, writes Funke Busari

A month plus days under lockdown, Lagos has recorded 1068 cases of COVID-19 infections, and 30 deaths. So the state is regarded as the ‘epicenter’ of the pandemic in Nigeria.

All along, Lagos has always drew the most attention for most things, including domestic violence. A rising crime rate over 64 percent, in the wake of coronavirus.

And just like the pandemic—which has now swamped medical frontliners tackling it up to their eyeballs—the crime, too, has been overwhelming for the long arm of the law.

“Of the calls received, 72 per cent were from women under threat of violence, who have been forced into isolation with their abusers,” said Dr. Kemi DaSilvia Ibru, the founder of the Women at Risk International Foundation, WARIF.

The Lagos government confirmed this, too. “Since the lockdown, we have seen an increase in reporting on our hotline – 08137960048,” said Titilola Vivour-Adeniyi, coordinator, the Lagos Domestic and Sexual Violence Response Team early in April.

Lagos is merely a sweets pot for domestic abusers. Other states are no exemption, now or before. Between January 2017 and April 2018, Sokoto recorded over 30,000 cases. That was even in time of relative peace—when the victims were not locked up with their abusers.

The perpetrators act similarly everywhere. Even abroad, too.

France’s Gender Minister Marlene Schiappa confirmed that domestic violence incidents soared in the early period of the lockdown. In the UK, it is even worse. As early as two weeks into the lockdown, no fewer than 16 women were murdered by their abusive partners.

In countries where murders have not been reported yet, the abuse takes different shapes and forms. “Perpetrators are threatening to throw their victims out on the street so they get sick,” Katie Ray-Jones, the Chief Executive Officer of the US National Domestic Violence Hotline reported. “We’ve heard of some withholding financial resources or medical assistance,” she told TIME.

For this intimate crime, spending time together is a bait. The violence will surely escalate as the lockdown drags out. And by the time the last strain of the coronavirus disappears, the casualties won’t only be those that die from the virus (85 in Nigeria now, and over 200,000 across the world); the fatalities will include those, mostly women and girl children, who lost their lives in the escalating violence from their domestic abusers.

There are many of the victims who have lost—and many more will still lose—their limbs to save their lives.

Not much can governments do to save the abused during this lockdown. Non-governmental organisations have little latitude, too. Reasons: COVID-19 and its backlash, domestic violence, are both fatal; and their incidences could be overwhelming. The virus has killed over 247,033, and infected over 3.5 million across the world. In Nigeria, 2,390 have been infected and 85 dead from its complications since the lockdown kicked in Lagos, Abuja, Ogun, and other states across the nation March 31.

Many expect the worst from Nigeria. Its health system ranks 42nd out of 195 countries, according to a 2018 global health study in the medical journal Lancet. There are 12 Nigeria Centre for Disease Control testing laboratories across the nation of 36 states. The country boasts 20 nurses, midwives, and doctors for every 10,000 people, which is less than what the World Health Organization recommends. So containing the spread will be a lot difficult for the nation health workers to cope with, and over-stretching for existing health facilities and personal protective equipment.

Even for WARIF and other NGOs with a focus on domestic violence, the pandemic and its fallouts are equally engrossing. COVID-19 transmission rate currently stands at 10 percent, according to a Texas University study. That makes it infectious enough to scare away most do-gooders who could have stuck out their necks in perilous times like this—to seek out and rescue women and girls in such domestic distress. These social workers need to stay alive to help; so they won’t venture out to do this until they have some protection. WARIF was already asking for fund to make PPE available for its responders to walk-in cases of rape and sexual abuse during the lockdown.

But a lot can befall the victims in the meantime.

For one, the government law enforcers who can detect, prevent, mitigate domestic abuses, and defend the abused, have a lot on their plate already. Enforcing government lockdown is taxing most of the security agencies heavily. Victims will have to endure the violence for as long as it takes the responders, especially police, to arrive.

Worrying about responding, to start with, only makes sense where the law enforcers are adequate.

As numbers go, Nigeria, again, fares not so well here. The nation has 370,000 police officers. Only 20 percent of them protect lives and ensure public peace in the country. “The remaining 80 percent are just busy providing personal security to some`prominent people’ on guard duties,” an Assistant Inspector General or Police, AIG Rasheed Akintunde revealed while on tour of Bayelsa in 2018.

By the UN ratio—one cop to 400 citizens—Nigeria needs 500,000 men to police its 200 million citizens. But, for now, the ratio is tilted: one cop to 593 citizens. Former Inspector General of Police Ibrahim Idris, however, confirmed the police force is way below—in need of an additional 155,000 officers to hit that mark.

Having the right ratio doesn’t solve all of the policing problem, especially during lockdowns. Experiences in China, UK, and other well covered nations in term of police strength show how overwhelming lockdown law enforcement has been since the virus broke out into a pandemic.

Many battered Chinese women, for instance, were told by responding law enforcers to endure first, and report their abuses when the lockdown is over. Some of the abused women were advised to behave or run to relatives’.

The police response can’t be any better in Nigeria. The law against domestic violence seems porous, and its enforcement weak.

In Lagos, where WARIF and DSVRT said their hotlines have been ringing of the hooks, the police strength is 29,122, and the population is about 20 million. A policeman then covers 689 citizens. It has to be a stretch to have any effective police response to domestic violence in such a scenario.

The southwestern state has been the only one where domestic violence law seems most effective. (The Federal government has no such law, except that of Violence Against Persons Prohibition) Ebonyi, Cross Rivers, Jigawa, and Ekiti also have their state laws which, legal advocates say, are just there.

But mostly up north, the law, even in peace time, is too forgiving.

“Nothing is an offence, which does not amount to the infliction of grievous harm upon any person and which is done by a husband for the purpose of correcting his wife, such husband and wife being subject to any natural law or custom in which such correction is recognised as lawful,” Section 55(1)(d) of the Penal Code of Northern Nigeria.

The code doesn’t recognise spousal rape either. Section 357 of the Criminal Code and 282 of the Penal Code a husband cannot be charged with marital rape. The code recognises that any sexual intercourse with a wife can never be rape.

Pressing home the law here during lockdown might end up a waste of time—that is if law enforcers have spare time to respond.

Development watchers have concluded the COVID-19 pandemic will alter the world and its ways long after the virus dies out. It is expected that Nigeria’s lukewarm response to domestic violence will be part of the ways of life that will give in.

The lockdown, as it is now, is surely helping in exposing lots of the nation’s rights violation. That won’t generate so much a fuss. The real scandal will come when Nigeria remains unchanged, as far as domestic violence goes, when the pandemic wind blows out.