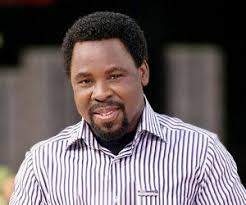 Although Joshua was not physically present during the broadcast of Sunday 3rd May 2020, his ministers responded to a question posed by a viewer about how the cleric raises funds as he is never heard preaching on the subject of tithes and offerings.

The cleric described giving offerings as “Scriptural” but emphasised that people should give as “God prompts their conscience”.

“They may not be many but people of conscience are giving – I mean, the right people are giving genuinely, for the salvation of their soul—and their giving is blessed of God,” he conceded.

“Wrong people have to be reminded many times before they can give because it is not from their heart,” he explained, clarifying that wrong people referred to “dubious” or “corrupt” individuals who “who got their money, their things from the wrong source.”

He elucidated that such people would give “to be seen, to be heard and to be praised here”, adding that if they later hit hard times, they would often write letters to the church reminding them of the money they had previously given.

He described that such people misguidedly felt their offerings were a form of “bargaining with God to get what they want” or a way of manipulating Him “to give approval to their selfish motives.”

“Giving is like serving. Both should be done with joy – without being reminded, because you don’t need to be reminded to do that which gives you joy,” he continued, adding that believers should ask for the Holy Spirit’s help in giving, receiving and asking.

“The force behind the money given determines the kind of money it is,” Joshua thoughtfully expanded. “When we inherit stolen wealth, we would live under a stolen future, thereby mortgaging our future. Remember, what comes from God goes to Him.”

The cleric stated he was “very careful” when it came to receiving offerings from congregants. “If I receive something from you, the source and the manner you give will determine whether it’s a blessing or a curse that I receive from you,” he posited.

Relating the question to the current situation in which churches have been shut worldwide due to the coronavirus pandemic, Joshua explained such a period “demands conscience”.

“If you give something from your heart, it will bless you that gives it and also bless the person or ministry that receives it,” the cleric concluded in the interactive program, citing Apostle Paul’s admonishment in 2 Corinthians to give as “each one proposes in his heart, not grudgingly, for God loves a cheerful giver”.

Joshua has gained a reputation for not focusing on money during his sermons, asking for offerings during his broadcasts or selling merchandise during his large overseas crusades.

With nearly 1.7 million YouTube subscribers, he is also one of the platform’s largest users who doesn’t monetise his videos with the placement of third-party advertisements.

During the global lockdown, his ministry has engaged in extensive humanitarian programs, assisting vulnerable citizens most affected by the economic impact of the crisis in nations spanning Europe, Africa, South America and USA.