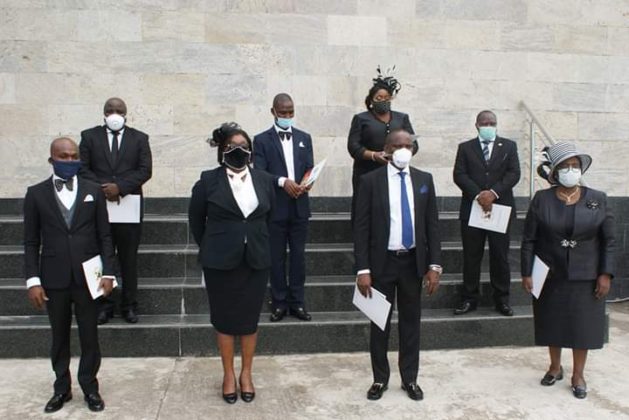 Eight new judges have been sworn-in to the Lagos State Judiciary by the state governor of Lagos State, Mr. Babajide Olusola Sanwo-Olu on Tuesday.

The appointment of the eight new judges brings to 61 the number of judges in the state. While three are females, five are males.

The eight judges took the oath before the Governor and members of the State’s cabinet at a swearing-in held in the Executive Council chamber in the State House, Alausa.

Mr. Sanwo-Olu, in his address at the occasions said to the newly-appointed judges of the High Court of Lagos State that the members of the judicial arm of Government have a duty to keep the wheel of justice administration turning in this period of Coronavirus (COVID-19) pandemic by fully acquainting themselves with the new culture of justice dispensation being driven by technology.

He added: The continuity of judicial services in the period of public health emergency remained vital to boosting people’s confidence in the administration of justice system and to ensure adequate enforcement of regulations initiated to stop the spread of the pandemic.

“This chamber we are holding the swearing-in has just been opened for the first time in the last two months. This is the reality of the global coronavirus pandemic, which has evolved new culture in our interactions at homes and offices.

“In this period of public health emergency, we need the judiciary to keep the wheel of the justice system moving. The administration of justice system must not be halted because of the health crisis. Our judicial should fully adapt to the evolving culture and be at the services of those who seek redress and justice at the court.

“I have no doubt that the Lagos State Judiciary, under the leadership of My Lord Justice Kazeem Alogba, will be an arm of Government that we can continue to rely on as a partner in boosting people’s confidence in Government and justice system.”

The Governor said judges earned their nominations and appointments to the High Court of the State based on their sterling credentials and experience in the respective areas of engagement.

The Governor urged the judges to dispense justice without fear or favour, advising them not to soil their hard-earned reputation and family names in the course of discharging their duties.

Sanwo-Olu added: “Having gone through your resumes, I know you have all distinguished yourselves in the the legal profession and we expect you are bringing your years of experience and service. We are convinced this journey would raise the standards of our judicial service.

“I congratulate our newly sworn-in Honorable Justices and we believe you all have what it takes to be fair and equitable in dispensation of justice to our citizens. By being sworn in as judges, you have brought honour to your family names. However, you must ensure that your names are not tarnished in the course of discharging your duty.”

Expressing gratitude to the National Judicial Council (NJC) for the painstakingly vetting the appointed judges’ credentials, the governor noted that he was convinced that quality and calibre of the new judges would improve judicial process in the State.

He also used the occasion to re-emphasise his commitment to ridding the State of the ravaging pandemic, assuring that the State Government would continue to collaborate with stakeholders on the frontline and coordinate response strategy to battle the virus.

He further promised to maintain transparency in communicating the response activities to the public.
Attorney General and Commissioner for Justice, Mr. Moyosore Onigbanjo, described the event as “special occasion” in the evolution of judiciary in the State. The quality of credentials of the appointed judges, the State’s chief law officer said, will be brought to bear in fast-tracking administration of justice system.

Solicitor-General and Permanent Secretary in the Ministry of Justice, Ms. Titilayo Shitta-Bey, explained that the process of nomination of the judges was transparent and extended to different areas of legal profession, public service, private sector and the magistracy.

She expressed optimism in the leadership of the State Governor, stating that, “The transparency in the selection process of the new judges has deepened our trust in the leadership of Governor Sanwo-Olu. The appointment of these eight judges, having passed through the rigorous competence assessment and selection process, will strengthen the capacity of the Lagos Judiciary which in turn will translate to an improved service delivery in the justice sector.”

Speaking on behalf of the newly appointed judges, Justice Dorcas Olatokun appreciated Governor Sanwo-Olu for finding them worthy of the appointment, which she described as a “unique privilege” to contribute their quota in deepening justice system.

She pledged to be upright and fearless in the discharge of her duty.