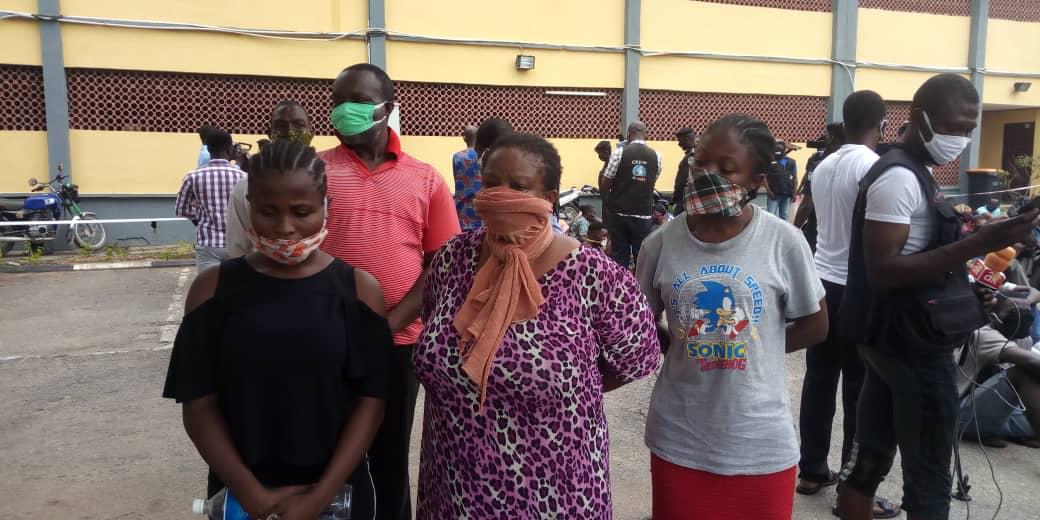 Miracle Kalu was recently arrested in Lagos for selling her baby for N130,000, but she is giving reasons for her action.

She told the Police how she collided with four other people to perpetrate the act.

Kalu, the mother of 28-day old baby an indigene of Ohafia in Abia State explained that her inability to take care of the baby and herself moved her to sell her baby to Cecilia Okafor, 40, after birth.

Stating that she got pregnant out of wedlock her boyfriend whom she claimed is the father of the child denied being responsible for the pregnancy and leaving her with nothing.

However, the bubble about the sales of the baby burst when two of her accomplice, Patrick Mbama, 41, and Ogechi Chinonso Ekwebele, 30, were arrested at Anthony area of Lagos, while returning from Imo State, where they had travelled to smuggle the baby to Lagos.

Parading the suspects on Monday, at the Lagos State Police Command Headquarters in Ikeja, the Commissioner of Police, CP Hakeem Odumosu disclosed that Mbama and Ekwebele had pretended to be a couple as at the time of their arrest in a Toyota Sienna SUV carrying seven passengers.

The Lagos police boss said the baby was crying in the vehicle and the supposed mother of the child, Ekwebele was advised to breastfeed the baby.

CP Odumosu said the hesitation of Ekwebele to breastfeed her baby raised the suspicion of other passengers.

Among the passengers are, Patrick Mbama, and Ogechi Chinonso Ekwebele, traveling together with a baby of about a month old, suspected to be stolen.

“They were coming from Orlu, Imo State.  All the occupants of the vehicle were arrested for violating the ban on inter states travel and the vehicle is impounded. Upon questioning, this particular childless couple claimed that a childless man and wife in Lagos had paid for the said baby.

The childless couple, Izuchukwu Okafor, 51, and Cecilia Okafor, 40, who ordered for the baby were arrested.

“The name of the child’s parent as contained in the birth certificate recovered is that of the buyers. The baby’s date of birth was dated March 23, 2020. The biological parents of the baby were traced. The baby is at the social welfare department of the Lagos State Governmmet, and if the biological mother wants the baby back, she may have to apply.”

Kalu also spoke to journalists that she was an orphan and a secondary school drop-out.

Confessing Kalu said: “When I got pregnant, my boyfriend’ whose house I do not know, abandoned me. He denied the pregnancy saying he was not responsible for it.

“Since I was leaving with my elder sister who is also struggling, I had to live the house and look for a means of survival. I agreed to giving birth to the baby at God’s Own Maternity in Imo State, and sell the baby afterwards.”

Probed further, the lady said she spent the N130,000, she was paid, “I bought drugs, and took care of my health, because I have Ulcer. ”

While Okafor, said it was the quest to have a child of her own that forced her into buying the baby. According to her “Being barren for 15 years was not easy. So when I heard there was a girl who was pregnant, and did not want to keep the baby, I had to take care of her. I took care of her from antenatal till she gave birth. She told me she had asthma and that was why she agreed to sell the baby. I paid her N130,000 for the baby and she told me she was an orphan.”

A police source whose identity cannot be revealed, disclosed that Kalu, is notorious for selling babies, as it was not her first time of giving birth and selling off her baby.