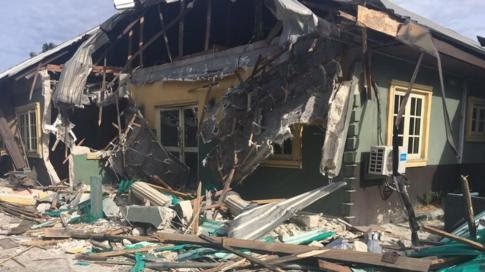 My attention has been drawn to a criminal trial, prosecuted personally by the Honourable Attorney General of Rivers State against the manager of my hotel – Prodest Hotel and myself. This event is disturbing given that on Sunday, 10th May 2020, Prodest Hotel building and the fitting and fixtures as well as beverages and consumables were alongside the building demolished by the Executive Governor of Rivers State on the allegation by some members’ of the State COVID-19 Task Force that Prodest Hotel was functional on 9th of May 2020 thus violating the Governor’s directive. We had taken Management decision in line with the state directive that our staff should proceed on break until the lockdown was over and that was effective 6th May 2020 and as such, it was impossible for my hotel to be functional on 9th of May 2020.

It appears the Rivers State Government misplaced his trust in the State COVID-19 Task Force members as against citizens and businessmen legitimately paying taxes to Rivers State Government. On Sunday, 10th May 2020, in a jungle Justice approach, the Governor of Rivers State led a demolition team to my hotel, destroyed the hotel structure and stole my valuables.

I am therefore concerned that after facing the punishment of demolition of the Hotel, my manager is now constrained in facing the double jeopardy of another penal punishment. If His Excellency was aware of this judicial process, why was he in a haste to demolish the hotel?

In an earlier attempt to douse whatever may be a grievance I had in the face of the Governor’s abuse of the law still pleaded my support of this Governor on air. My appeal to whatever humanity the Governor had has failed. The Governor has highjacked the Rivers State Judicial System in negating the rights of my manager.

My manager who is without any employment as a result of the rash action of the Governor and is now in detention since Sunday (8 days and counting) for an offence that the penalty is #200.00. This is one of the most absurd and oppressive use of the judicial system. To be confined for a misdemeanor trial without an option of bail. I have been informed that the trial of my manager is for a simple offence created by a Covid 19 regulation of the Rivers State Government. The offence is akin to violating a traffic hand sign. It is an offence that bail must be granted. Right now my manager is being offered an opportunity for his freedom if only he admits committing a crime. The presiding magistrate has since Tuesday 12th May 2020 refused to rule on an application for bail for my manager.

It has also come to my attention that the legal representatives of my manager has faced such unsual aggression. Neither my Manager nor his lawyers was given copies of the charge sheet. In fact the magistrate had specifically ruled that my manager shall not be given any material of the prosecution’s case in a clear violation of Constitutional safeguards for criminal trials. The lawyers also applied in writing for certified copies of the charge sheet and records of proceeding of the court but the registry of the court refused to take the application and in fact tore the application with the comment that the Governor had issued instructions that Defendants in the Covid 19 regulation matters should not be given any record of the court. The lawyers are now frustrated and have threatened not to appear.

I hear my manager is sick. He is vommitting blood. He is in incarceration with out food nor water. He drinks toilet water. His life is now at risk because of the threat to his health. This punishment is metted to him just because he refused to plead guilty. He is the only Covid 19 suspect that is standing a trial. All others pled guilty and are released. His punishment for his incarceration is that he seeks justice where others didn’t.

I am scared of how far this Governor will go. I am scared for the life of my manager. I call on every Nigerian to do their best to prevail on the Governor to operate within the laws of Nigeria and ensure that my manager is granted bail and has access to all materials necessary for his trial. The Governor should not make a mockery of the Rivers State judicial system just to prove a beastial point. He should remember that we are all humans and allow his actions to be determined by his humanity. We may be at war with Corona Virus. Nigerian citizens are not the enemy.

Girl 19, Faked Her Death To Stop Her Mother From Asking For Money
The President As A Repented Democrat – Ebun Adegboruwa
To Top