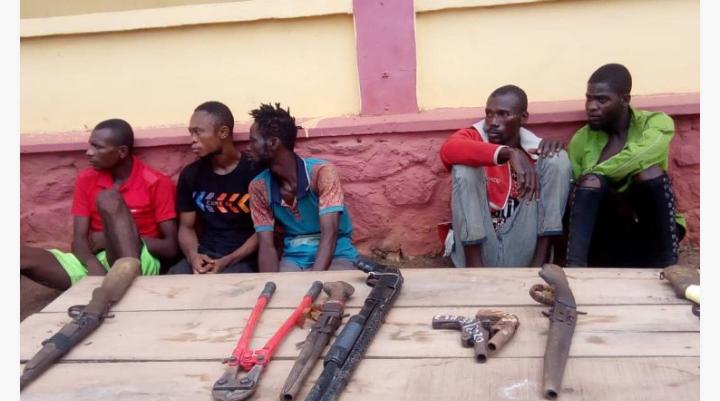 The suspects included a 28-year-old Goddey Robinson who allegedly raped a lady (name undisclosed) at Agbara in Ado Odo/Ota Local Government, strangulated and pushed her into a ditch.

The Commissioner of Police Kenneth Ebrimson who paraded the suspects at the Police Command’s headquarters in Abeokuta, the state capital said that the suspect, dump the victim in a ditch after the act.

According to the Commissioner, the suspect thought his victim had died immediately but unknown to him, she regained her consciousness and shouted for help.

The CP explained that the victim who was later rescued, but suffered spinal cord injury, said she was bedridden at Igbobi Orthopaedic Hospital, Lagos.

But the suspect while speaking with journalists, denied alleged rape, saying the victim was his girlfriend.

“She was my girlfriend. She stayed under my roof for more than a year. Her siblings were aware.

“We had minor issue and she left home angrily. While I was going to my work place on that fateful day, I met her on the road and accosted her. In the process, we had altercation. She held my cloth and when I was trying to force myself out of her hand, She fell into a canal. I left her and moved on,” the suspect said.

Ebrimson pledged that the Command would never rest on its oars in waging war against any would-be criminal who has made crime a lucrative business.