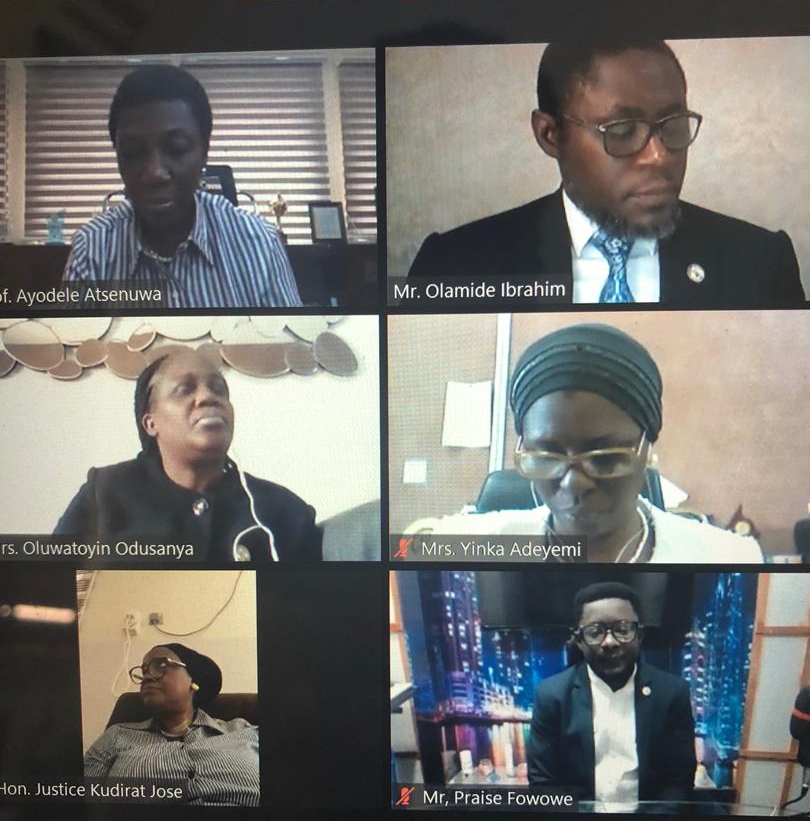 On Tuesday, the Lagos State Directorate for Citizens’ Rights, DCR, held a sensitisation campaign through a webinar virtual program for the general public as part of efforts to tackle the disturbing increase in sexual abuse and offenses, especially on the defilement of young children.

Speaking during the event, the Solicitor-General and Permanent Secretary, Ministry of Justice, Ms. Titilayo Shitta-Bey, said the rising spate of the crime of defilement and other sexual abuses on children in the society, at least the fraction reported by the media indeed calls for great concern and makes the topic an apt one particularly when these abuses especially on children, including infants happen almost on a daily basis.

She said she believe that the seminar will serve as a wakeup call to all the stakeholders in child protection and guide them on their required responsibility and duty to stem the growing tide of this menace.

Also, the State Attorney-General and Commissioner for Justice, Mr Moyosore Onibanjo implored the general public not to condemn the victims but to encourage and support the punishments of the perpetrators.

Earlier, Mrs. Oluwatoyin Odunsanya, Director of Citizens’ Rights, thanked all the guest speakers and participants at the online event, including the Chairman TESCOM, Mrs. Elizabeth Ariyo; the Permanent Secretary, Ministry of Education, Mrs. Abosede Adelaja and the Permanent Secretary Ministry of Youth & Social Development, Mrs. Yewande Falugba for their contributions and goodwill messages during the programme.

She urged parents, teachers and caregivers to engage their children about sex education because ignorance is one of the tools that most perpetrators use against them, adding that they should also talk to them about private parts and not give it another name.

The Director of Public Prosecution Lagos State, Mrs. Yinka Adeyemi, speaking on the topic: “The Crime of Defilement from the Prosecutor’s Angle: Preservation of Evidence in Order to Secure Conviction”, advised parents and teachers that if they found their children or wards in a situation of rape or molestation, they should ensure that all traces of evidence are kept intact and safe.

According to her “when issues of rape occur, timing is critical, sexual should be collected within the first 72 hours; Photographs of injury sustained or the scene of a crime to be sexuala Victims should not take a bath or use the bathroom before undergoing medical examination; Clothes worn should be preserved and put in a box bag and also the victim statement most be recorded”.

Professor Ayodele Atsenuwa, Dean Faculty of Law, the University of Lagos who was the lead presenter spoke on “The crime of Defilement; the Role of Parents, Teachers and Caregivers in Ending the Scourge”.

She said the risk/vulnerability factors in child defilement are lack of parental care or support; Cultural factors; Poor reporting and impunity; Peer pressure (especially among adolescents); Poor training of teachers and caregivers and undefined and inadequate guidelines for schools and caregivers.

While mentioning the different role of parents, teachers/schools, caregivers as well as the government, Atsenuwa maintained that the safety and protection of the child largely depends on the family and environment.

According to her, “The Government should disseminate mandatory reporting rules and make reporting process user-friendly; Adopt measures to protect teachers and others who report a crime; Engage in standard-setting (alongside professional bodies, where applicable) in relation to activities of all stakeholders; Adopt age-appropriate curricula for sexual health education for schools and licensing and regulation of caregivers activities among others”.

Other speakers, such as Mr. Praise Fowowe, an Educator and Family Life Therapist and Mrs. Kikelomo Solomon-Ayeni, a Social Activists and strong advocates for youth empowerment and child protection especially the girl-child also spoke in a similar vein.

Recall that the Directorate for Citizens’ Rights is responsible for the protection and enforcement of fundamental human rights of residents of Lagos State. One of its units under the Directorate is ‘One Stop Child Justice Centre’, which handles all child-related matters (in collaboration with other MDAs) in Lagos State and protect the rights of children as provided under the Child Rights Law of Lagos State, 2015.