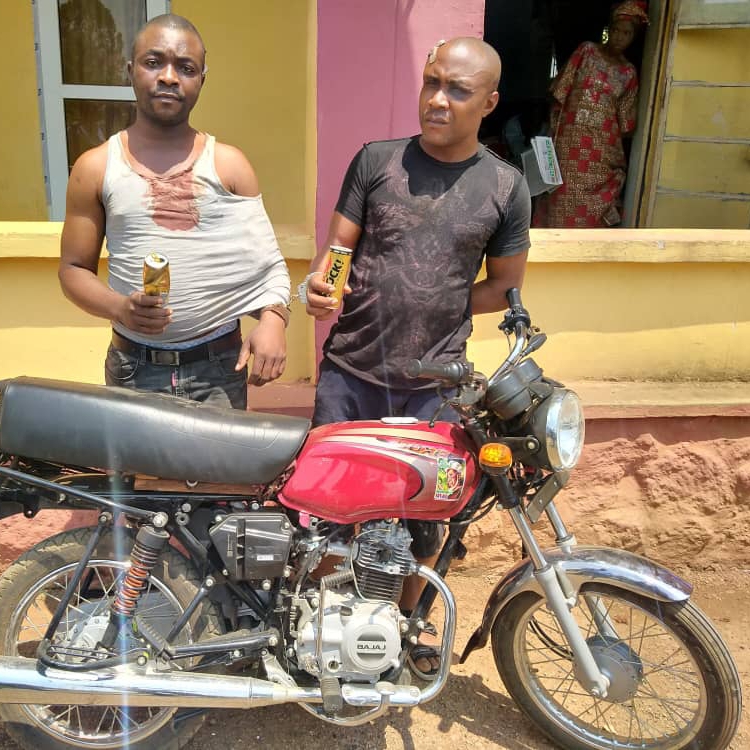 The duo of Chidi Umeh 40 years and Obinna Onyebuchi 28 years have been arrested in connection with drugging an unsuspecting member of the public and snatching his motorcycles.

They were arrested by men of Ogun State Police Command on the 10th of August 2020 following a distress call from the residents of Alanu area of Owode Yewa to SP Olabisi Elebute Divisional Police Officer of Owode Egbado division that two men who have drugged a motorcyclist were about taking his bike away.

In response to the distress call, the DPO led the anti-robbery team to the scene where the two suspects were caught with the help of members of the public.

According to the Ogun State Police Public Relations Officer, DSP Abimbola Oyeyemi, he said, “Chidi Umeh who came all the way from Nnewi in Anambra State confessed to the commission of the crime, he explained that he is selling motorcycle parts in Nnewi and he used to come to Owode area to snatch motorcycles from the owners after drugging them through energy drink which he used to give his victims on a friendly note.”

The Police Spokeperson stated further that his accomplice, Obinna Onyebuchi corroborated his confession, but he claimed that this is the first time he followed him out on robbery assignment. Up till the time of writing this report, their latest victim is still sleeping in the hospital as a result of the effect of the drug on him.

He confessed to have snatched up to four motorcycles from the owner at different times.

Following this incident, the Commissioner of Police CP Edward A. Ajogun has ordered the immediate transfer of the suspects to State Criminal Investigation and Intelligence department for discreet investigation.

He has further warned motorcyclists to stop taking any edible from their passengers who are total strangers to them in order to forestall the occurrence of such heinous crime.