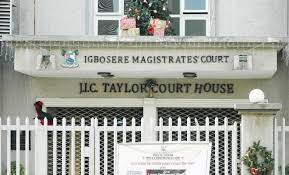 One Eniola Yemi has been dragged before a Magistrate Court 2 sitting in Igbosere in Lagos for alleged defamation.

The four count charge accused the defendant of conspiring with others now at large to threaten and intimidate Prophet Oladele Israel Ogundipe of Genesis Global Celestial Church.

Fourty-two years old Eniola was also accused of conspiring with those at large of behaving in a manner likely to injure the reputation of Prophet Ogundipe by uploading his videos and audios recording on social media network and there committed an offence punishable under Section 375 of the Criminal Code Act Cap C38 Laws of the Federation of Nigeria, 2004.

Eniola Yemi was also in the third charge accused of colluding with others sometimes in June connived with others to cause the breach of peace by publishing defamatory matters against Prophet Israel Ogundipe of Genesis Global Celestial Church contrary to the provisions of Section 168 (1),(d),(2)  of criminal law of Lagos.

She was brought before Chief Magistrate Kikelomo Ayeye who released her on bail in the sum of N500,000 and adjourned the matter to November 9 for trial.