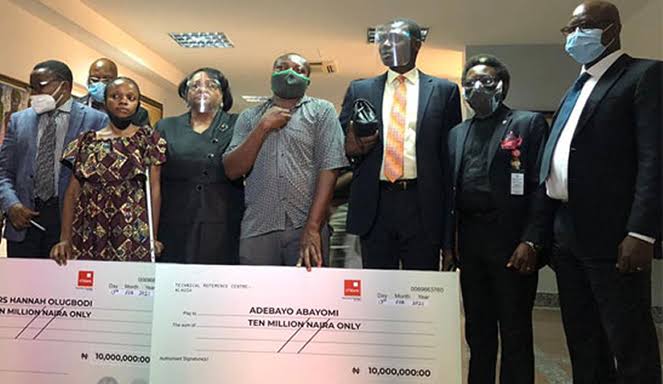 Compensation for victims of police brutality began on Friday with the award of the sum of N10 million each to the family of late Kudirat Adebayo Abayomi, who was killed by a police stray bullet in April 2017.

Also awarded another N10 million is Hannah Olugbode, an hairdresser, whose leg was left shattered by a stray bullet fired by some SARS officers around the Ijeshatedo area of Lagos.

Recall the Lagos State Judicial Panel of Restitution and Inquiry set up to investigate cases of police brutality especially involving officers of the now-defunct Special Anti-Robbery Squad (SARS), latest action is set to address the grievances of petitioners.

The panel also recommended the prosecution of the erring police officers.

The panel also awarded the scholarship for the children, and a letter of apology to the family of the deceased from the police in the case of Kudirat Adebayo Abayomi.

In a related development, Hannah Olugbode, who has been on crutches was also awarded N10 million for the stress and anxiety she suffered, and to help her undergo treatment.

Olugbodi, a 35-year-old hairdresser, had in November 2020, narrated how she ended up on crutches after her left leg was shattered by a stray bullet fired by some men of the disbanded police Special Anti-Robbery Squad who were attempting to arrest a young man with tattoos in June 2018 at the Ijeshatedo area of Lagos.

Olugbodi said the SARS operatives were at one Ogun City Hotel, to demand money to fuel their vehicle when they saw the young man with tattoos among a group of persons watching a football match at the hotel.

According to the petitioner, the owner of the hotel, one Abu, who usually gave the SARS operatives money, was not around to attend to them.

She explained that the SARS operatives labelled the young man with tattoos a Yahoo Yahoo boy (cyber fraudster).

She said she was at Ijesha market trying to buy pepper to prepare food for her children to take to school the following day when she was hit by a stray bullet.

Olugbodi said the market women rushed towards her and asked her for her address and the name of her husband, which she managed to give before passing out.

She said she was eventually taken to the Lagos University Teaching Hospital where they said there was no bed space and she was given four bags of intravenous fluid right in the bus.

The presentation of the cheque was made on behalf of the Lagos State Government by chairman of the Lagos Judicial Panel, Justice Doris Okuwobi.