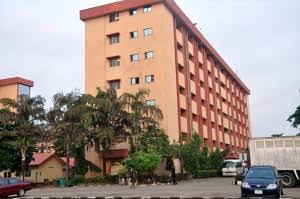 A-38-year-old man, Agbo Peter who attempted to set the Ministry of Justice at Alausa Secretariat in Ikeja on fire has been remanded in Correctional centre until he is able to perfect his bail.

The remand was ordered by the Presiding Magistrate, Mrs. J.A. Adegun following arraignment and denial of the defendant over an averted bid to burn down the facility holding safe important judicial documents.

Trouble began for Agbo on 18th February, 2021, when he was caught with keg of petrol, which he had poured on the ground and was about to set the building on fire.

The security guard within the complex was said to have caught him after workers were going home after the day’s work and he sneaked into the place with keg of petrol and matches.

Subsequently, he was handed over to the Police at Alausa Division for interrogation over his conduct.

During interrogation, he reportedly admitted that he actually poured petrol on the ground but had not set the building ablaze before he was caught.

The Prosecutor, Supol Benson Emerhi, asked the Court to give a date for hearing on the matter to prove the case against him.