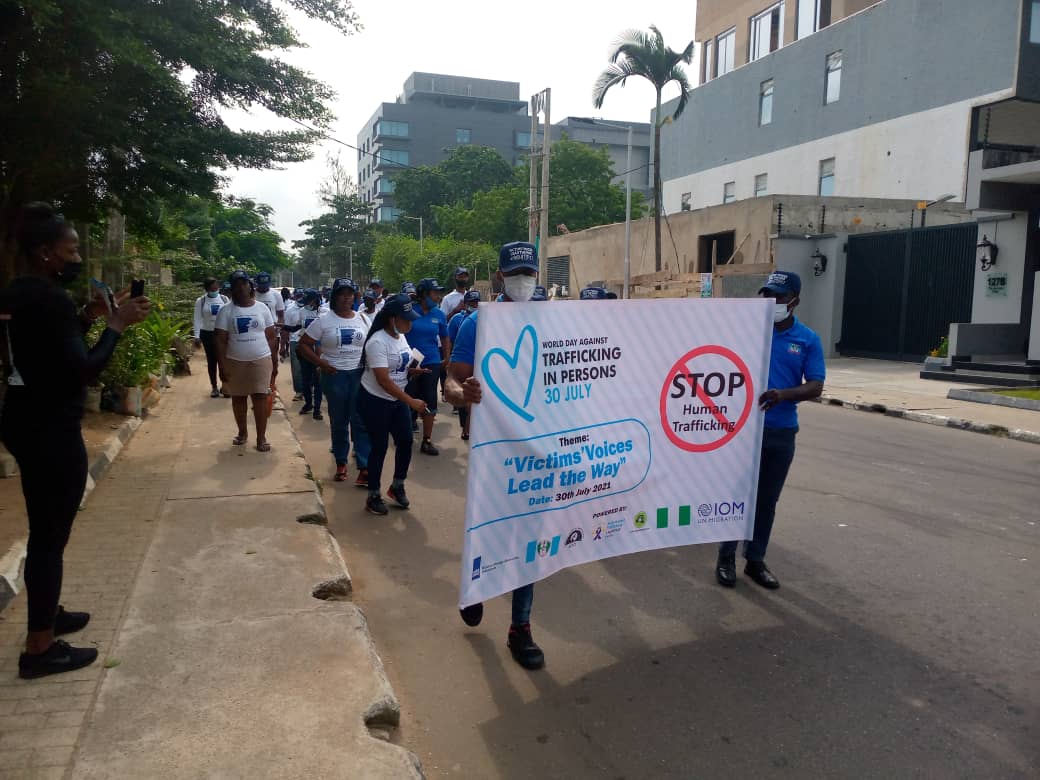 The National Agency for the Prohibition of Trafficking in Persons, NAPTIP, Lagos Zonal Command said it has rescued over 300 persons from different countries they were trafficked to this year.

This was disclosed by Mr. Agaran Alao NAPTIP Lagos Commander during a walk against human trafficking on Friday in commemoration of the 2021 World Day against Trafficking In Persons held annually on 30th July, promoting the theme: “Let the Voices of Victims Lead The Way.”

The International Organization for Migration IOM, the Lagos Chamber of Commerce, legal hub University of Lagos, Live Abundantly organisation, among many other non governmental and government agencies also walked with the agency in commemoration of the 2021 World Day against Trafficking In Persons on 30th July, 2021.

Lagos State Zonal commander Mr. Agaran Alao led the walk from the NAPTIP Lagos office in GRA Ikeja to the Allen Junction in Ikeja and other places within Lagos.

Also, Associate Professor Iyabode Ogundiran representative of Anti-human trafficking hub University of Lagos expressed that the scourge of human trafficking is all over the world and creating awareness of the victims’ plights should be a continuous exercise as she urges members of the public to be careful not to fall prey to the trafficking ring.

She said, “The push factor has also been poverty. People who cannot get better opportunity to get jobs, and live a good live can easily get deceived to come for job offers but on getting there, the story changes. There is no work but sex slavery. The issue of parental care for children is important so that a neighbour will not take advantage of a mother or father not being in the lives of children to deceive and traffick them”.

Mrs. Morenike Moribeoje, the National Coordinator of the Network Against Child Abuse, Trafficking and Labour NACTAL said all hands must be on deck to fight human trafficking and build a strong society that values the lives of young Nigerians.

While Mrs. Bumi Laja of the Live Abundantly Organisation said “Let’s hear from the victims. They are the ones that have been through all the horror. They are in the position to tell those intending to travel illegally their experiences so as to dissuade them from being trafficked “.

One of the rescued girls, a-19-year old Bella John said “I am from Delta state. I lost my dad and a neighbour we know as Mama called me to her room. She told me she had sales girl job for me in Benin city Edo State but she said that I should not inform anyone that we are traveling. I left Delta state with her and we got to Benin.

“She took me to Lagos where we moved by road to Mali. It was after we got to Mali that I was told it was prostitution work. I felt bad. Luckily, some girls she put me up with about 50 of them decided to ran away. Some of them succeeded in escaping, they were the ones who reported to the embassy. That was how I was rescued and brought back to Nigeria”.

Another survivor Becky John said she is happy to be back in Nigeria. She said, “There is no job outside the country but sex slavery. It is horrible and I suffered all the time I was there in Ghana. I was lucky to escape and rescued to Nigeria. I am going about preaching to young girls to be patient in Nigeria and not be recieved that there is good job in other countries. What the traffickers are taking you to do there is prostitution”.

One of the rescue agencies in the United Arab Emirate Abigail Foundation urged government to provide jobs for the teeming youths especially those who have completed their secondary education.

Mrs Abigail said, “Nigerians are the traffickers. They seize their passports and visa and threaten the girls that if they are not sleeping with men, they will kill their parents and other family members in Nigeria. The trafficked girls are called Okada riders and they have what they nicknamed as pit where these girls sleep with these men. They beat them up when they refused to work. This pit can be a construction site, a forest, bush, anywhere. The Madam is very cruel and there are cult boys who also participate in the trafficking ring and are used to threaten the girls to meet with men for money.”