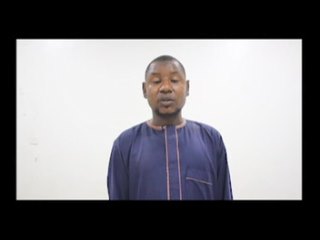 A senior school certificate holder, Hamza Abdullahi Gambo who specialises in issuing fake employment letters of the Nigeria Meterological Agency, NIMET, has been arrested by the Intelligence Response Team IRT of the Inspector-General of Police.

The alledged serial fraudster who is an indigene from Karofim-Madaki, Bauchi Local Government Area of Bauchi State was arrested after collecting over N5,000,000 from unsuspecting job seekers.

The former employee of NIMET confessed to have issued the fake employment letters and that he was paid for doing so through his Guaranty Trust Bank Account number 0018546542.

Gambo also confessed that he issued fake employment letters to a total of 121 job seekers through fake letters of appointment, designed with the agency’s logo and staff signature before his arrest.

He also admitted through a confessional statement to the police to have collected a total of N5,173,000.00 from the job seekers through his bank account.

Trouble began for him when one Beatrice Itodo reported him to the police that he swindled her of a total of N2,366,000 through fake employment letters issued to many of her relatives purported to be by the agency.

Corroborating her claim, the suspect disclosed that Itodo had paid N2,366,000.00 to him through his GTB account number for 15 job seekers initially and the fake employment letters with NIMET letterhead was issued to them through electronic mail addresses.

He also said, “I cannot remember how much I collected based on individuals but the total amount is N2,366,000.”

“I received the money via my account number as stated earlier,” he said.

During interrogation by police detectives on what the proceeds of the crime were used for, the suspect said that he used it to build a house in Kandahar, Bauchi State with the intention of selling it to pay his victims at the end of the day.

A copy of the employment letter sighted by CASEFILE shows that it was dated 1st March, 2021 and was signed by Rabi Mohammed, Director of Admin and Supply for the Managing Director of NIMET.

Police detectives are still conducting discreet investigations into the criminal activities of the suspect to apprehend those behind the design and printing of the fake employment letters.

Meanwhile, the Inspector-General of Police IGP Usman Alkali Baba warns unemployed Nigerians desperately seeking for employment to ensure they conduct necessary checks before engaging in such ventures with private citizens for security reasons.