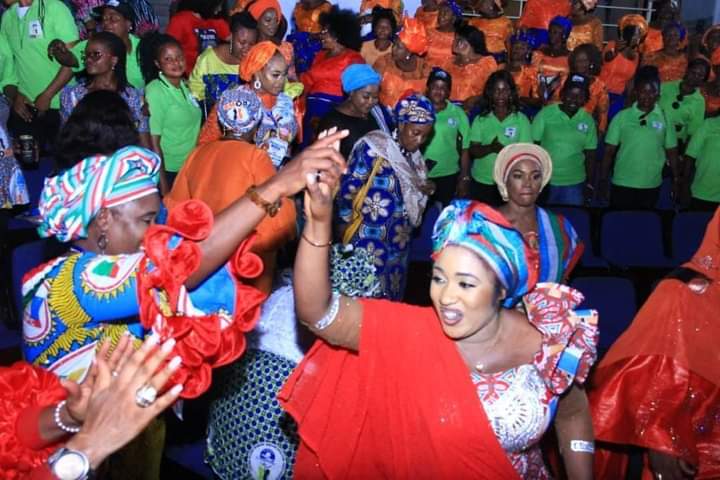 The National Women Leader of the All Progressives Congress, Dr. Betta Edu, has said the women in the ruling party will put their weights behind presidential aspirants that support women.

She said the APC women wing would be going all out to mobilise women for the forthcoming elections, noting that the Independent National Electoral Commission had extended registration to June.

Edu said this when the Women Mobilisation Directorate of the Hope ‘23 Yahaya Bello Presidential Campaign Council visited the party secretariat to congratulate her on her emergence as the National Women Leader of the APC.

All the women groups under the Yahaya Bello Presidential Campaign Council paid Edu a visit on Tuesday in Abuja.

The team, led by the Director, Women Mobilisation of the Campaign Council, Zara Onyinye, pledged their support to the National Women Leader in ensuring women inclusion in every sphere of governance.

Onyinye said that as women who had been recognised and empowered by a gender sensitive Governor Yahaya Bello of Kogi, they would ensure that women across the country were not left behind.

“We have come to congratulate you on your well deserved office which we know will make more positive impact on women inclusion.

“We the Yahaya Bello women have also come to pledge our support to the success of your tenure. You can count on us at anytime.

“As women who have also been recognised by and empowered by Alhaji Yahaya Bello, the gender sensitive governor, we will ensure that no woman is left behind,” Onyinye said.

Arike said that the Yahaya Bello administration, recognising the importance of women, had ensured that women occupy strategic positions in the State.

The SSG also told the National Women leader to be sure of the support and listening ears of Alhaji Yahaya Bello as she occupies the position, adding that his doors are always opened to her at anytime.

“We are here to congratulate you and to pledged our support to you. Whenever it has to do with women, be sure that we will support you to the last.

“We are here also here to assure you that you have the support of Yahaya Bello women who are represented in all states of the country.

“We also want to let you know that Yahaya Bello loves women and ‘special’ persons with disabilities and that his why he always puts us in a special place.

“I have been SSG since 2016, the Head of Service is a Woman, three of the Six Vice Chancellors of Institutions are women, all Vice Chairs of the 21 local governments are women, with a lot more occupying strategic positions.

“I want to assure you that his doors are always opened and you can always call on him anytime you have any problem,” Arike said

Responding, Mrs Edu thanked the women for their visit as she encouraged them to take the bull by the horn to get actively involved in politics, and support each other to succeed.

Edu also said that the APC would not give its ticket to a Presidential candidate that would not support women, adding that President Muhammadu Buhari had already set the pace which must be sustained.

She commended the calibre of people who had shown interest in contesting for Presidency under the APC, describing them as people beyond the average.

“The aspirants that are coming out for the APC Presidential ticket in APC are not in any way close to average, they are high above standard, far above board. I have not seen one that is not good.

“Now as a party, our party will come together under the leadership of our dear President, Muhammadu Buhari and of course the National Chairman and other leadership structure of our party to decide on whom will become the candidate of our dear party.

“Before that decision is made, something is required that we must do immediately. If you are supporting a candidate in APC, you must go out now to begin the door-to-door mobilisation for registration of voters registration.

“The APC women wing will be going all out to mobilise women as INEC as extended the registration to June.

“If our special women have not registered make sure that you take them to the nearest unit to register.

“One thing that is certain is that the APC will not give its ticket to a Presidential candidate that will not support women.

“Anybody who will not consider in that footstep, we will not support,” Edu said.