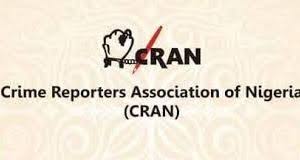 No fewer than twelve members of the Crime Reporters Association of Nigeria, CRAN, seeking positions in the executive committee would test their popularity in a general election scheduled to hold this Friday, May 6, 2022.

The election is coming on the heels of the expiration of Mr. Odita Sunday’s led administration which came into office for the second term three years ago.

Mr. Odita Sunday was first elected President of the Association in 2016 and re-elected in 2019 following his outstanding performance.

In a press statement on Wednesday, Chairman of the Association’s Electoral Committee; Mr. Frank Oshanugor said the election which would be observed by the executive committee members of the Lagos Council of the Nigerian Union of Journalists, NUJ, takes place at the CRAN Media Centre located at Oduduwa Street, GRA Ikeja, beginning from 1:00p.m.

He stated that every arrangement for a free and fair election has been put in place; adding that the campaigns embarked upon in the past weeks by the candidates have been healthy and robust. He commended the contestants for engaging in peaceful campaigns.

Oshanugor enjoined all contestants to play by the rules prior to and during voting as his Committee has the right to disqualify any candidate who breaches the already stipulated conditions for the election.

The Crime Reporters Association of Nigeria is a beat association under the auspice of the Nigerian Union of Journalists. It consists of journalists from the print, electronic and online platforms who are assigned to cover the crime and security related beat which includes the Nigeria Police, Nigerian Immigration, Nigerian Customs, Nigeria Security & Civil Defence Corps, Department of State Service, the private security sector and so on.

The Association was founded about 30 years ago and has made its mark over the years through its annual lectures/awards during which contemporary national security related issues are discussed with solutions offered by industry professionals.

It has also honoured scores of Nigerians and institutions for exemplary achievements or contributions to the society and humanity.