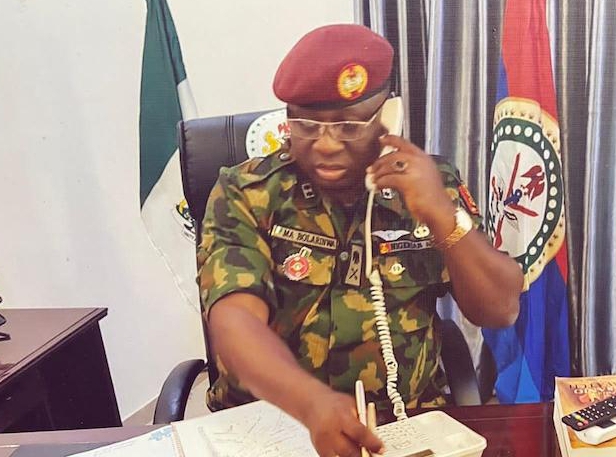 An official of First Bank of Nigeria, Mr. Chris Ekpeni who is a second prosecution witness in the alleged case of fraud against fake Army General, Bolarinwa Oluwasegun Abiodun, has testified that the defendant used his account to receive monies from an alledged victim.

According to his evidence on Wednesday, while being led in evidence by Mr. Rotimi Oyedepo, Counsel to the Economic and Financial Crimes Commission, the witness on behalf of the bank told Justice Oluwatoyin Taiwo of the Special Offences Court that its customer, formerly known as Hassan Kareem Ayinde approached the bank for a complete change of his name to bear Bolarinwa Oluwasegun Abiodun, which the bank obliged.

Giving evidence, the bank manager explained that as at 15th August, 2018, the credit balance of the defendant was a little above N1,000 before inflows of transactions from KODEF Resources Limited were noticed on the said account, following which withdrawals were made by the customer via ATM and subsequent transfers to different individuals.

Another prosecution witness, the third, Mr. Emmanuel Emaikwa, a Relationship Manager with the United Bank for Africa also told the court that during the COVID-19 lockdown in 2020, the bank’s customer transfered nothing less than N18million into the account of the defendant in two tranches, according to the bank’s record.

The defence coumsel, Mr. Kayode Lawal however did not cross-examine both banks’ officials who testified.

According to him, “There is no cross-examination, he said, in response to the judge when asked if he wanted to do so.

Earlier in the proceedings, the counsel had cross-examined the victim on his prior testimony but he maintained that he was duped by the defendant.

He reiterated that the suspect collected loans from him in his bid to become a Chief of Army Staff, COAS.

Meanwhile, the judge has ordered that the medical doctor at the Ikoyi Correctional facility give medical attention to the defendant who had complained through his lawyer that he is having an undisclosed health problem.

Further hearing in the matter has been adjourned till May 6 and June 10, 2022 respectively.

The defendant is standing trial on a 13-count charge bordering on obtaining money by false pretence, forgery of documents, and possession of documents containing false pretence involving an alleged N266,500,000 fraud.