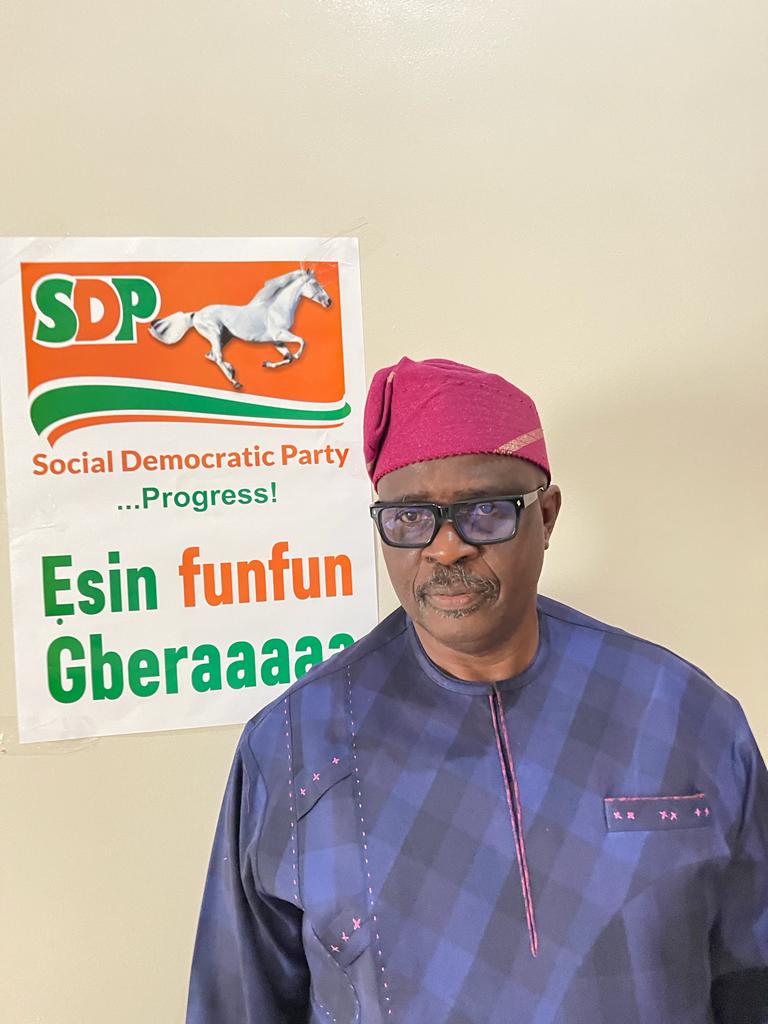 In his address shortly after clinching the ticket, he said Lagos has not benefited from the governance routes by the ruling party.

According the him, this is the time to salvage Lagos, by voting the right Candidate that the SDP presented.

“Having received the Party’s mandate, it is my intention, plan and indeed desire to work tirelessly with all Party faithful to ensure that the motto of our Party (Progress) and its symbol of a white sparkling horse bestrides the geographical landscape our beloved State, rightly referenced “Centre of Excellence,” he added.

Below is his full speech

Fellow Lagosians, My Dear Brothers and Sisters. Stakeholders In Lagos State.
HOPE, REBIRTH, BETTER, REWARDING, FUTURE, ACCOUNTABILITY AND A FUNCTIONAL GOVERNMENT OF THE PEOPLE, BY THE PEOPLE AND FOR THE PEOPLE – CHANGE OF NARRATIVE.
Good morning and welcome to a bright new day, that has ushered in Hope, Abundant Blessings, Prosperity and indeed a Brighter, Rewarding Future for our dear beloved Lagos State, and its people.
I remain eternally grateful to the Social Democratic Party (SDP) families in Lagos State and national for supporting my aspiration and candidacy for the Office of Governor of Lagos State.

Having received the Party’s mandate, it is my intention, plan and indeed desire to work tirelessly with all Party faithful to ensure that the motto of our Party (Progress) and its symbol of a white sparkling horse bestrides the geographical landscape our our beloved State, rightly referenced “Centre Of Excellence.”

The urgent need to work tirelessly hard to install good governance and a government of accountability is the collective efforts of all of us, individually and collectively. Therefore, I want to welcome everyone to an all inclusive campaign that necessarily will usher in a real democracy and not a government of a cabal, who have laid siege on our dearly beloved state and many of whom have surreptitiously coveted the vast resources of our State into their private pockets, evidence of which abound everywhere in the State.

It has become crystal clear that it is mandatory, obligatory and necessary that this ugly trend and state of affairs must be reversed without further delay, because it has impoverished the vast majority of our population, stifled the growth of human enterprises and foistered on us seemingly  irreversible poverty, which must be reversed without further delay.

It is an indisputable truism that the essence of government can be found in Jeremy Bentham’s statement: the greatest happiness of the greatest number.
In a situation where only a few citizens hold siege to State resources and covet as it were for personal gains and aggrandisement, would constitute an abberation and is wrong. It will be feudal in character and a dictatorial Oligarchy.

We cannot afford the appalling (present) situation where groups of transporters and touts will lay siege on our State and a “lukewarm” government will compensate them with political appointments. This is wrong and whatsoever is incurably wrong cannot be right.

Our motor parks and streets must be managed by agencies of government that will liase with the park unions and work with these unions to guarantee safety of commuters everywhere in the State.

The convoluted traffic jam in the State makes commuting (everywhere) extremely traumatic, an health hazard that must be reversed without delay. Necessarily, we must as a matter of utmost urgency develop our waterways and introduce functional, safe and reliable ferry services.
The Social Democratic Party government will liaise with other stakeholders in Nigeria and abroad to develop a multi intra-city railway services, that will link the State and pass through its interland. These would be necessary to ease the traffic gridlock everywhere in our State, thereby displacing traffic on the road to the waterways.

We must improve the primary healthcare system and provide good, cheap and affordable primary health services in the various local government areas and the LCDAs.

Our primary schools and secondary schools policies will be reviewed and we will put in place policies that will make these schools a citadel of good and affordable education for our dearly beloved children.

We have a Masterplan to transform Badagry into a global tourism haven, with first class facilities to be built and managed through a Public Private Partnership. The global history of slavery and slave trade is incomplete without Badagry resonating cacophonously in any discussion globally.

The city of Epe had been improved upon, but we believe that more will be done, that city being a link between Lagos and Ogun State and a veritable link by water to Ondo and other States of the Federation. Its culinary sea food potentials and serene environment are tourism potentials and we plan to liaise with the Obas, Chiefs and people to revamp its economy and guarantee better life for all residents and people.

Ikorodu is a historical city of importance. We will ensure that the traffic gridlock in Ikorodu is properly managed and a seemless free flow of traffic will be guaranteed. We will work with the people at all levels and put in place wealth creation schemes in Ikorodu and build industries that will provide jobs and employment for its teeming youth population.

LASTMA will be reorganised, its staff retrained and better conditions of services introduced to serve as incentive to our traffic managers.

Our government in Lagos State will not discriminate against anyone anywhere in the State on grounds of gender, tribe or race. We will ensure a peaceful and safe social and economic environment that will ensure attainment of full potentials.

It is our intention and determination that Lagos State becomes a clean, liveable city. We will actualize the “Policy Reform And Planning Regulations And Building Control” 2008 Report, domesticating the “National Building Code,” that will ensure that buildings of different heights no longer collapse and never again will our dearly beloved State be traumatised by a 21 Storey Collapsed Building (a global embarrassment for us and our country) due to an irresponsible and non responsive bureaucracy, whose salaries and emoluments are paid from taxpayers funds.

The management of waste and a midnight to dawn clean-up operations will be introduced by the Social Democratic Party SDP in Lagos State.

We will build Ijankara, Sandgrouse markets and all other demolished markets that the present government in the State had abandoned and allocate to initial owners at affordable costs. We will also construct access roads to these markets and improve on their health and sanitary conditions.

The Ikoyi Osborne/Lekki Bridge will remain untolled and we will review the possibility of constructing more link bridges, where such are desirable and needed.

The Social Democratic Party (SDP) government will encourage the revamping, rejuvenation and recalibration of the agro allied industries in the State that will provide employment for our teeming youth population and our womenfolk.
The Social Democratic Party in Lagos State will establish a Ministry of Youth and Poverty Alleviation, that will be managed by the young people from home and the Diaspora.

The Ministry of Sports and Social Development will necessarily be a youth powered Ministry. A functional Masterplan of sports development will be implemented to encourage sports at levels of our primary, secondary and tertiary education in our dearly beloved State.

The Social Democratic Party (SDP) government will ensure vibrant women participation and women will be included in all board compositions and appointments.

As it is, our women population have been sidelined by consecutive administrations in our State. This is wrong and indeed discriminatory.

We plan to campaign in all the nooks and crannies of Lagos State to deliver the “Message Of Hope” and on-the-spot assessments of social improvement and provision of good welfare packages.
We seek assurance from the present government in Lagos State of the safety of our lives and properties.
Ours is indeed a mission to lead our people from servitude, godfatherism, reign of a cabal, corruption and insatiable materialism, coveting state resources into “empire funds”, and thereby ensure equitable distribution of wealth to the people and for social services and infrastructural upgrade and development.
It will no longer be business as usual, but a service-oriented, human friendly “government of the people for the people and by the people” akin to what has been appropriately been described as a Social Contract.
A Stitch In Time Saves Nine.
Chief Kunle Uthman, Legal Practitioner, [Social Democratic Party SDP (GOVERNORSHIP CANDIDATE FOR LAGOS STATE)]
31st May, 2022