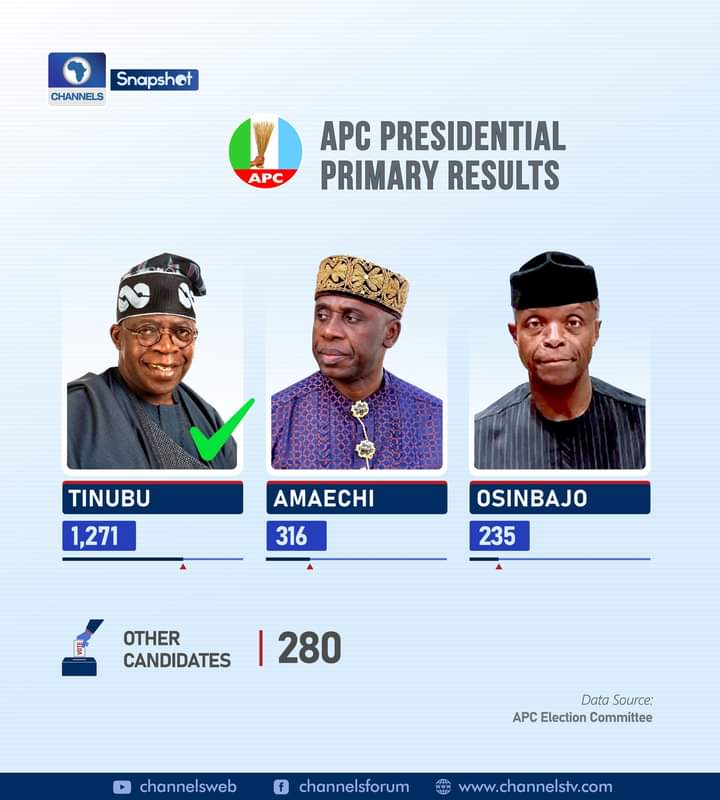 Senator Bola Ahmed Tinubu, the National Leader of the All Progressive Congress, APC, has emerged as the Presidential candidate of the party.

Tinubu will now slug it out with Alhaji Atiku Abubakar, who had emerged as the Peoples Democratic Party, PDP, candidate, and Mr. Peter Obi who is the candidate of the Labour Party, LP.

Tinubu emerged winner after leading all the 14 candidates that contested for the primaries held all night at the Eagle Square, Abuja.

Nine candidates withdrew before the primaries, most of the candidates stepping down for Senator Bola Ahmed Tinubu, while only one candidate stepped down for Professor Osinbajo.

Former Minister of State for Education, Chukwuemeka Nwajiuba and serving Overseer of the Citadel Global Church, Tunde Bakare, put up a poor performance at the presidential primary of the APC.

While Nwajiuba could only attract one vote, Bakare recorded no vote.

Before to the ballot casting, the pastor had shunned calls for him to step down for stronger contenders, vowing that he would rather step-up.

The APC candidate has extended the hands of fellowship to his co-contenders.

He singled out those who stepped down for him in the race and commended their doggedness.

Tinubu praised them for believing in his brand as thinker and a doer.

According to him,”The competition is now over.”

The APC candidate said that those who did not support him have nothing to fear, calling him to join hands to build the party to defeat PDP during elections.