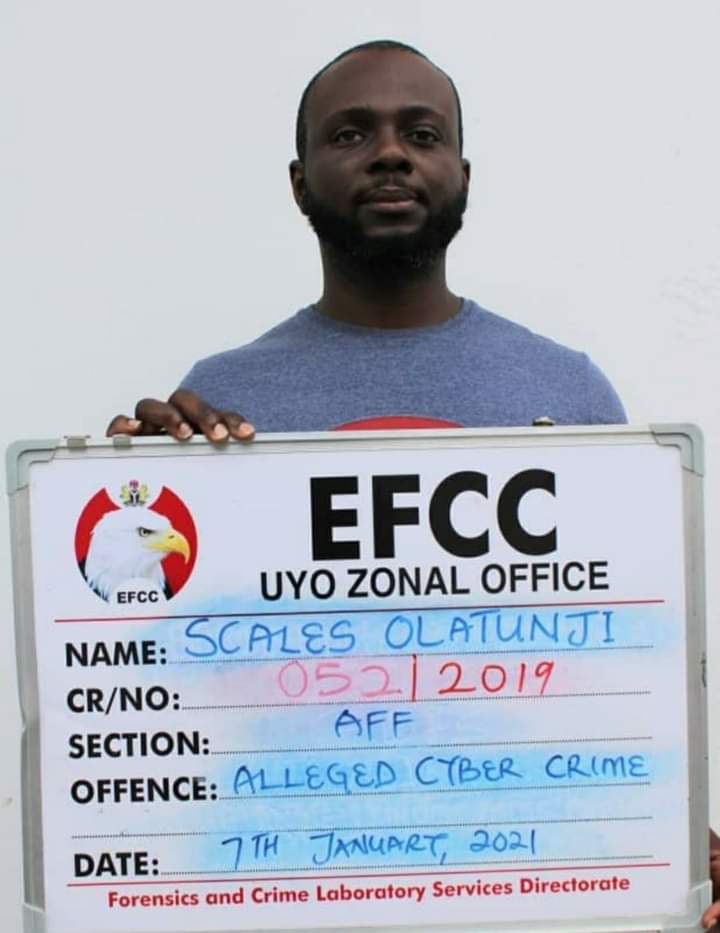 For engaging in internet fraud and money laundering, a notorious international fraudster, Scales Olatunji, has been convicted and sentenced to 235 years in prison by Justice Agatha Okeke of the Federal High Court in Uyo.

He was arraigned on July 2, 2019 on 45-count charges bordering on identity theft, money laundering and conspiracy.

The convict pleaded “not guilty” to the charges, which led to his trial.

One of the counts reads: “That you, Scales Olatunji Ishola “M”, Meraiyebu Charles “M (at large), Gabriel Adeyemi Olugbenga “M (at large), Ojomo Oluwatobi Ayodele “M” (at large) and Adekola Oluwatoyin “M” (at large), between January 2017 to October 2018, in Nigeria, within the jurisdiction of this Honourable Court conspired amongst yourselves to convert the total sum of N525,172,580.00  (Five Hundred and Twenty Five Million, One Hundred and Seventy-two Thousand, Five Hundred and Eighty Naira) only, which sum you reasonably ought to have known forms part of proceeds of  unlawful activities to wit: fraud (Business E-mail Compromise and Identity Theft), and thereby committed an offence contrary to Section 18 (a) of the Money Laundering (Prohibition) Act 2011 (as amended) and punishable under Section 15 (3) of the same Act.”

Another count reads: “That you, Scales Olatunji Ishola “M” on or about the 15th day of May 2018, in Nigeria, within the jurisdiction of this Honourable Court with intent to defraud did send electronic messages (email) using emailoffice01@aol.com to one Monica Goulmoen of the Charity Association for providing girls and boys in Kobane with a football pitch, while impersonating a certain Per Ravn Omdal, a former Norwegian Football Association President, demanding the sum of €64,000.00 (Sixty-Four Thousand Euros) to be transferred to you via IBAN GB74HBUK40062132722119 which was paid and you thereby committed an offence contrary to Section 22 (3)(b) of the Cybercrimes (Prohibition, Prevention, etc) Act 2015 and punishable under Section 22 (4) of the same Act.”

EFCC‘s counsel, Nwandu Ukoha opened the case on November 7, 2019 and subsequently tendered thirty-five (35) exhibits through four prosecution witnesses, which were all admitted in evidence against the defendant.

He closed the case on January 29, 2021 for the defence to open its defence.

Both the prosecution and defence counsel adopted their written addresses in October 2021, before the court adjourned for judgement.

Delivering judgement on Monday, June 27, 2022, Justice Okeke convicted Olatunji on all the 45-counts preferred against him by the Commission.

The court also ordered that the money in the convict’s account be forfeited to Norwegian citizens through the EFCC.

Also, his properties: House No. 6, located on Road 2 West-end Estate, Ikota, Lekki, Lagos State and House No. 10, Donatus Odum Street, Ikate, Lagos State are to be sold by the EFCC and the proceeds restituted to the Norwegian victims.

The convict’s ordeal began when operatives of the EFCC arrested him on March 20, 2019 at his Ikota, Lekki’s residence based on a petition from the Oslo Police District in Norway, requesting the assistance of the EFCC in investigating a network of Nigerians that had defrauded Norwegian citizens for years.

Investigations revealed that the convict belonged to a syndicate of internet fraudsters who specialised in Business Email Compromise, BEC.