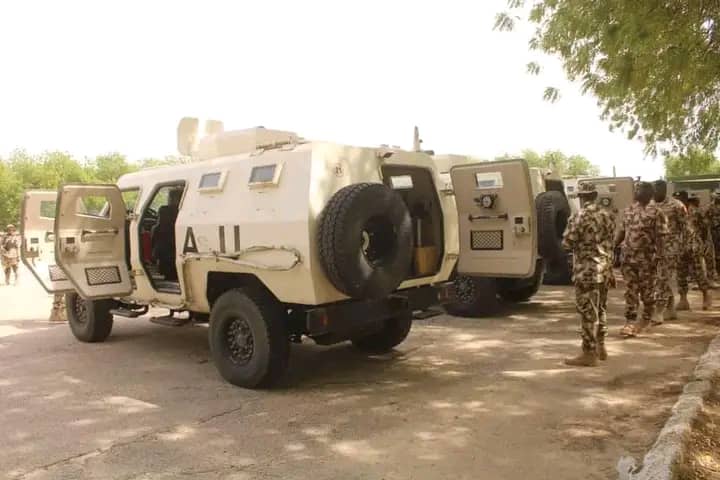 The African Union, AU, has shown support for the operations of Multinational Joint Task Force, MNJTF.

The FC further disclosed that the donation was informed by his visit to the African Union Logistic Base in Douola, Cameroon where series of liaison and deliberation between the Headquarters Lake Chad Basin Commission, MNJTF and the AU was held.

The Theatre Commander Joint Task Force, JTF, North East, NE, Operation HADIN KAI (OPHK), Major General Christopher Musa expressed delight in AU’s effort to support the fight against terrorism in Nigeria. He added that the equipment will contribute immensely to the ongoing operations in the NE.

The Theatre Commander and the Force Commander further thanked the Minister of Defence, Major General Bashir Magashi (Rtd), the Chief of Defence Staff and the Chief of Army Staff for their support in making the procurement and acquisition of the equipment possible.

Delivering the vote of thanks, the Commander, Sector 3 OPHK/MNJTF, Major General Godwin Mutkut appreciated the Theatre Commander and the Force Commander for their leadership guidance and unending support to the sector. He promised that troops of Sector 3 will make good use of the equipment to neutralise the remaining scores of the muarading Boko Haram/Islamic State West Africa Province, ISWAP, terrorists in the region.

In attendance were the Theater Component Commanders, Theatre Logistics Commander Major General EH Akpan, principal staff officers of the Theatre, senior officers of MNJTF, gallant troops of OPHK and MNJTF and members of the press.