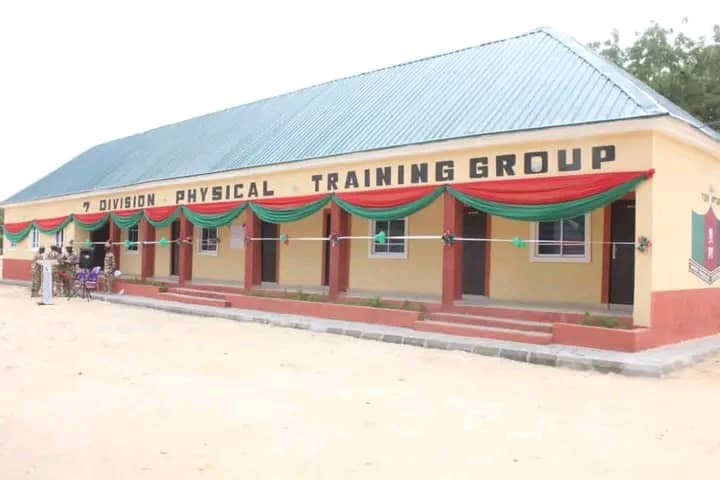 General Christopher gave the commendation on Wednesday, 13 July, 2022 while commissioning the project in Maimalari Cantonment.

“It is heart warming in the Theatre to see us busy all round in aspect of training and infrastructural development within the Cantonment which shows our desire for progress and development,” he said.

Continuing further, “Every officer and every soldier is a leader and at whichever level we find ourselves, we must lead with example.”

He said that officers must imbibe the spirit of positivity, display ingenuity and change their attitude towards establishing and maintaining public facilities.

General Christopher gave assurances that he will continue to do more to support initiatives that will bring more development within the cantonment.

Earlier in his opening remarks, the General Officer Commanding, GOC, 7 Division and Commander Sector 1 OPHK Major General W Shaibu said the feat are the kind of right attitude expected from officers at all level.

According to him, the initiative was conceived by Major Oloruntoba and he felt is necessary to compliment his effort and that drives him to take over the project to the finish and also furnishing it.

“I have taken a personal note of this giant stride which will be reflected in his Annual Performance Evaluation Report and to be followed with a letter of Commendation,”  the GOC added.

In his vote of thanks, the man behind the occasion, Acting Assistant Director Physical Training Group, Major AR Oloruntoba expressed immense appreciation to Almighty God for making the project a reality. He also registered his appreciation to the Theatre Commander his support and honouring the invitation to commission the project.

He said the appreciation will not be complete without mention the General Officer Commanding 7 Division and Commander Sector 1 OPHK Maj Gen W Shaibu for taking up the project and not only completing it but providing befitting furnitures to all the offices.

Present at the occasion were the General Officer Commanding 7 Division and Commander Sector 1 OPHK, Major General W Shaibu, Component Commanders, Formation and Unit Commanders, Principal Staff Officers from both Headquarters Theatre Command and 7 Division as well as other officers of OPHK.