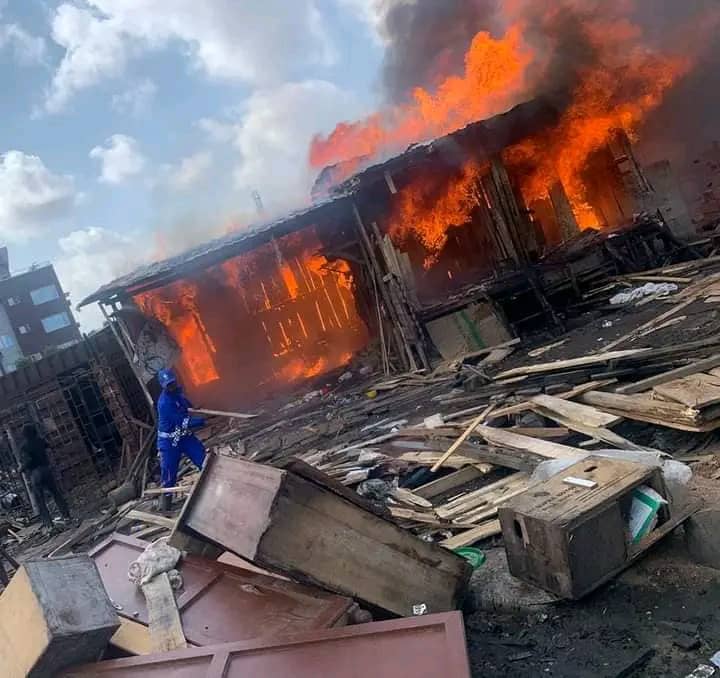 Okobaba is in the news again as raging fire destroyed property on Monday.

However, a statement from Lagos State Emergency Management Agency, LASEMA, disclosed that no life was lost.

The agency also disclosed that its quick intervention saved the adjourning streets from being engulfed.

It stated further that it deployed its resources to a fire outbreak at Okobaba Sawmill, Kadara Street, Ebute-Metta today, Monday, 18th July, 2022 at about 1:57p.m.

Consequent upon the arrival of the LASEMA Response Team at Onipanu and LRU Fire at Cappa Base, at the scene of the incident, it was discovered that several shanties were engulfed by fire.

Further investigation at the incident scene, the LASEMA Response Team discovered that the fire outbreak was caused by a sudden explosion of a gas cylinder while cooking.

The inferno which cut across residential shanties on Okobaba, end of Kadara Street and Coates Street was extinguished by the combined efforts of the Response Team.

The raging fire was prevented from spreading to Kano Street, other adjoining buildings surrounding the residential shanties were salvaged from the inferno.