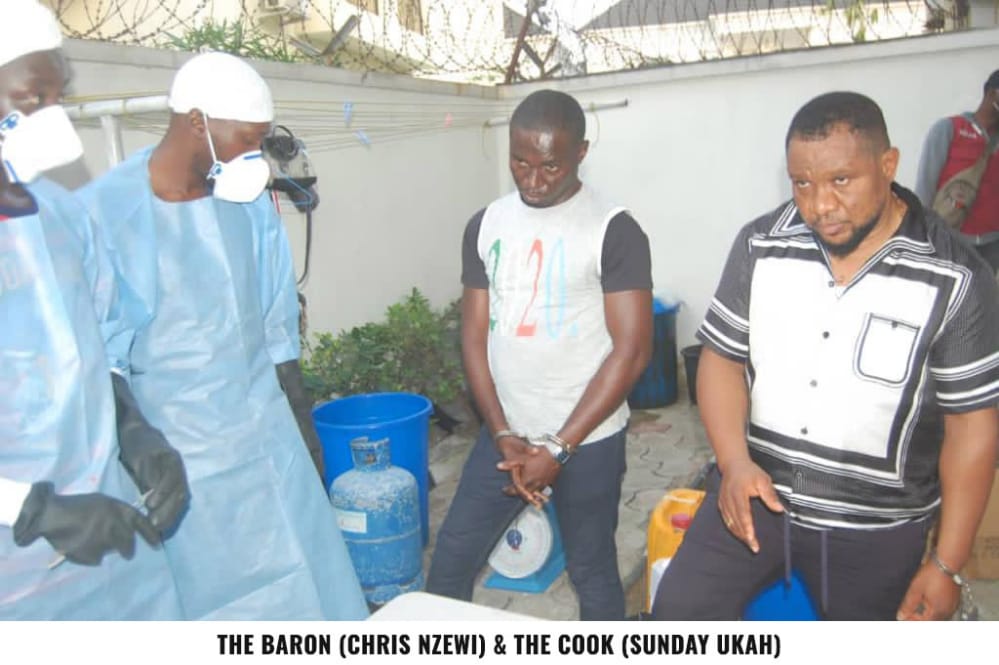 This is according to Spokesperson of the National Drug Law Enforcement Agency, NDLEA, Femi Babafemi.

Marwa said following the outbreak of crystal methamphetamine abuse in the last quarter of 2021, predominantly in the South East and the cry for help from many communities in the region because of the devastating effects the distribution and abuse of the dangerous stimulant drug were having on their youths and others, the Agency deployed all available assets to find the primary source of manufacturing of the drug in Nigeria and arrest the barons behind it.

According to the statement, “Marwa said while efforts in the past seven months against the cartel behind the Methamphetamine scourge, have led to the arrest of four kingpins and a cook; “Now, we have added two barons and another cook. This no doubt is a loud statement to those involved in the criminal illicit drug trade that it’s time for them to quit or risk losing it all; that is losing their freedom, investment and assets acquired through proceeds from the illegal business.”

According to him, “I am pleased to inform the public today that, after months of painstaking intelligence gathering, diligent tracking and coordinated offensive action, we recorded a breakthrough on Saturday, July 30, 2022, when officers and men of the Agency successfully busted two methamphetamine manufacturing facilities, called Meth Laboratories.

“The first one, located in Victoria Garden City (VGC) Estate of Lekki, Lagos, is owned by a baron, Chris Emeka Nzewi, while the second, in Nise Community of Awka South Local Government Area of Anambra State was owned by Paul Ozoemenam.

He added that the owners of these two illicit meth laboratories were successfully arrested alongside Sunday Ukah from Aba, Abia State, the cook or chemist that produced the drugs for them.

“The laboratory in Lagos was set up inside the Boys’ Quarter building of a four-bedroom duplex. From there, we recovered a total of 258.74 kilograms of crystal methamphetamine and various precursor chemicals used for the production of the toxic drug, he added.