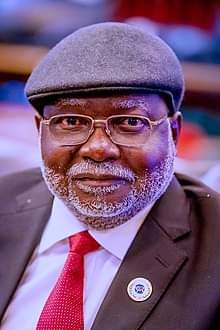 The Nigerian Senate has confirmed the Justice Olukayode Ariwoola as the substative Chief Justice of Nigeria, CJN.

The lawmakers confirmed his appointment on Wednesday in Abuja.

His confirmation follows a screening hearing at Wednesday’s plenary

Ariwoola was ushered into the Senate Chambers by the Senior Special Assistant to the President on National Assembly Matters, Senate, Senator Babajide Omoworare.

Pursuant to Section 231 (1) of the constitution of the Federal Republic of Nigeria as amended; I forward for confirmation by the Senate of Honourable Justice Olukayode Ariwoola as the chief justice of Nigeria,” President Muhammadu Buhari had said while recommending him to the Senate for confirmation.

The upper legislative chamber confirmed him after Abdullahi Gobir, Senate Leader, moved a motion to screen him in the “committee of the whole.”

The CJN was screened and subsequently confirmed through a voice vote.

When it was time to speak, the new Chief Justice of Nigeria who came in company of top judiciary officers in the country observed protocol, and shared his profile.

In his response, the new CJN promised to project the Nigeria judiciary to greater heights with the collaboration of the Executive and Legislative arm of Government.

He also responded to questions on the administration of criminal justice, and the poor funding of the judiciary.

The Senate however voted to confirm Ariwoola after the Senate screened him for nearly two hours.

Ariwoola has been acting as the CJN since June 27 this year following the recommendation of the National Judicial Council, NJC, to make Justice Ariwoola the substantive CJN.