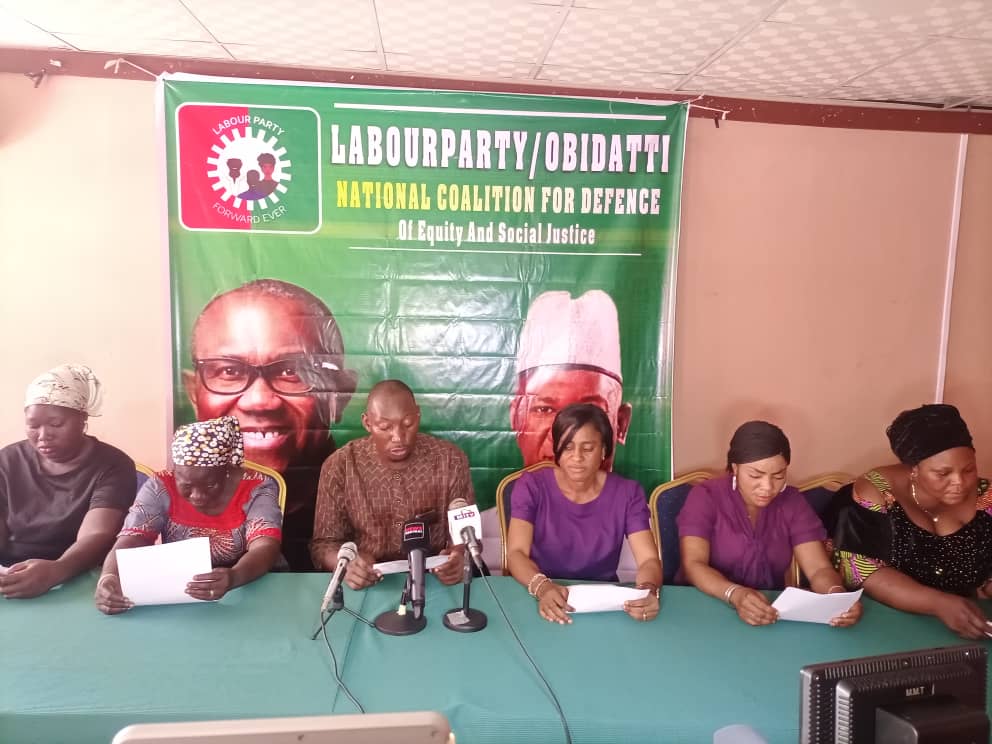 This is not the best of time for the Labour Party, LP, as some aggrieved members are complaining of exclusion from the Party’s activities.

Top on the list of their grievances is the composition of the campaign council which they claimed is lopsided.

According to the Spokesperson, Kolawole Samuel, the Council tilted too much to the South-East at the expense of the other geopolitical zones.

For them, this is not a good public image for the party already perceived as sectional. Some of the women also complained that the party jettisoned the principle of affirmative action, saying women are completely excluded from the Council.

They are however demanding the immediate removal of Doyin Okupe as the Director General and the immediate recompositioning of the party to take care of the interest of all.

They also lamented the cancellation of Wednesday campaign in Benue State which they linked to alleged mismanagement of N100,000,000 (One Hundred Million Naira) earmarked for the Nasarawa State.

Below is the press statement

Known the mantra of Labour Party which is based on fairness and equity, all aggrieved stakeholders were looking forward to the composition of an all encompassing new list.

It is on record that the Peoples Democratic Party is facing a battle of its life over its failure to keep to principle of fairness and how to manage internal crisis.

It is on this note that LABOUR PARTY NATIONAL COALITION FOR DEFENCE OF EQUITY AND SOCIAL JUSTICE is calling on the party leadership to ensure that such evil does not befall our noble party, thereby given the other parties an edge over us

Worthy of note is the fact that Nigeria democracy since 1999 have embraced zoning arrangement to give everybody a sense of belongings, but attempt to jettison it, is threatening the cohesiveness among Nigerians.

So it is imperatives that our great Party does not toe this same path and give opportunity to the oppositions to catch on our disagreement.

To this end, the LABOUR PARTY NATIONAL COALITION FOR DEFENCE OF EQUITY AND SOCIAL JUSTICE which comprises of concern members of our Party through this coalition TOTALLY reject the composition of the Presidential Campaign Council as released by the Party’s National Chairman, Barrister Julius Abure.

The Council is a reflection of lopsidedness and a shift away from the principle of fairness, justice and equity that the Labour Party is known for.

For the coalition, appointment of Labour Party Presidential Campaign Organisation which comprises of National Campaign Council, the Management Team, Zonal officers and State coordinators that favour only the South-East and South-South is unjustifiable and fails the test of natural justice. It is our firm believe that the attempt to sideline the South-West, the North-East, North-Central and North-West cannot be in the interest of the party.

This is coming at a time that part of the campaigns against our Party and its candidate is that it is a Sectional Party, we need to change this narrative, but we are afraid that this is not the way to go about it. A stitch in time saves nine, so we believe there is still enough opportunity for the leadership of the party to change this narrative.

It is on this premises that we demand that, there should be a review of the present Campaign Council. We demand the removal of Doyin Okupe from the list.

We demand that the list must accommodate members from the South-West, North, North-Central, North-East, and North-West.

The Coalition view in strong terms the attempt by the trio of Barrister Julius Abure, Dr. Doyin Okupe and Clement Ojukwu to christianalise Labour Party in favour of the southern part of the federation against the North which is against the spirit and letters of Labour party motto of equal opportunity and social justice.

The Coalition reject the appointment of South-East members as State Coordinators in the North.

The Coalition therefore called on Abure to immediately dissolved the National Campaign Council, the Management Team, the Zonal officers and other directorate officers who are mostly cronies of the Director General and his deputy.

Furthermore, the Coalition advised Barrister Julius Abure to depart from the old order of PDP with Presidential candidate, National Chairman and Director General all from the North and APC same faith tickets.

This will remedy the harm that has been done and give everyone the required sense of belonging. While we are assuring you of our best support and loyalty, we will not hesitate to explore all other options which include but not limited to legal instruments to seek redress.

We believe that one of the reasons why Doyin Okupe must leave the team is because of the embarrassing show in Nassarawa and the misappropriation of campaign funds to the tune of N100,000,000.

This has caused the suspension of Markurdi campaign slated for today. Labour Party is supposed to be in Benue State today, but our candidate, Peter Obi is not happy with the outing in Nassarawa, this is why he suspended it.

Other things that is a show of shame is the purported manifestos which has been disowned by Mr. Peter Obi. How can the Campaign DG release a statement that was  later disowned by the candidate? Our demands are simple, Doyin Okupe must go and the Presidential Campaign Council must be reconstituted? We must toe the AFFIRMATIVE ACTION by including more women in the Council.