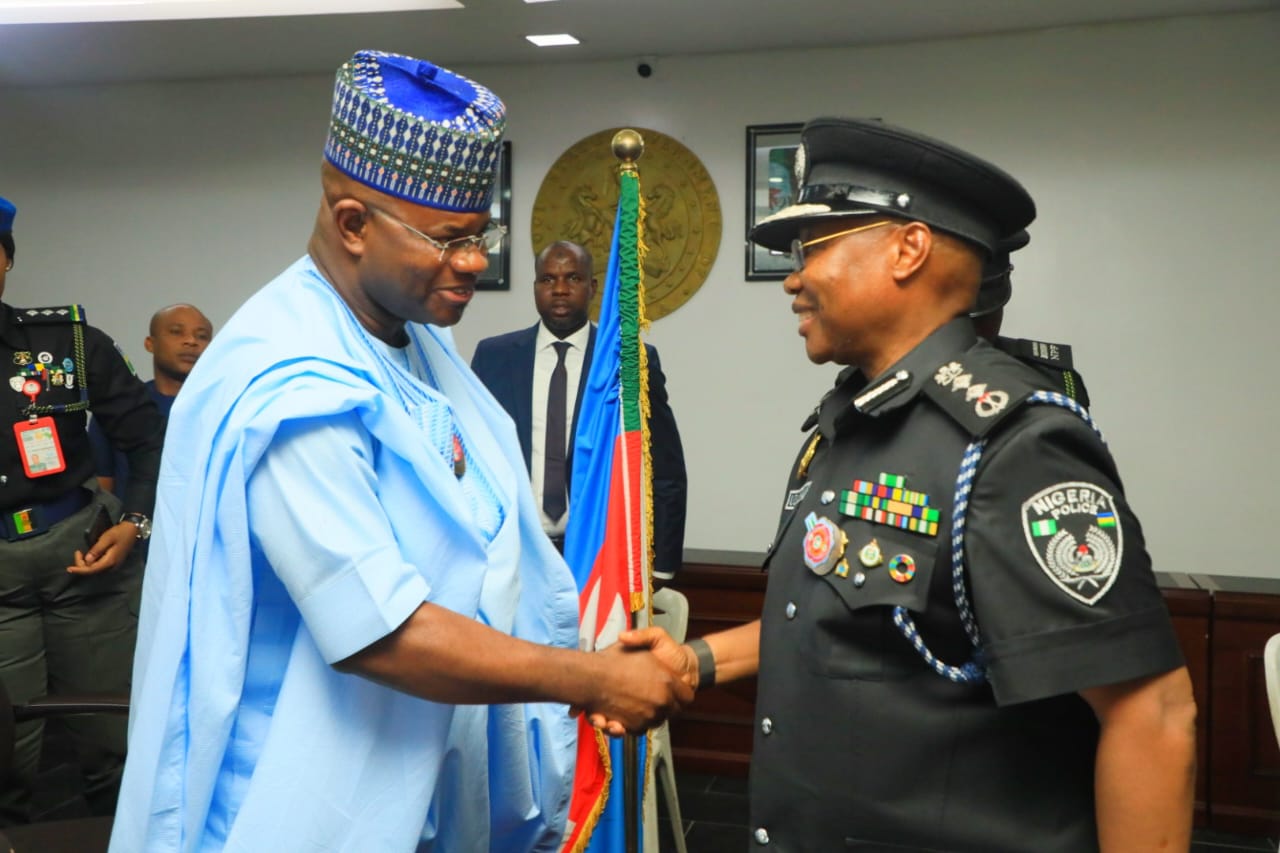 The Inspector-General of Police, Usman Alkali Baba has described Governor Yahaya Bello of Kogi State as a dogged crime fighter who had made the state unsafe for criminals to thrive.

IGP Baba said the Kogi Governor was one governor that would never raise the alarm of not being in control of security in his state.

The Police boss added that from what he had observed, the governor “leads from the front”.

He made this known on Monday during his visit to Kogi State, because he was happy that Governor Bello was playing the role of the “real Chief Executive Officer” in terms of security and noted that the governor is “a dependable ally in the battle against national insecurity.”

IGP Baba said, “I’ve never heard him crying that he doesn’t have control of security in his state. That is because he is able to synergise and cooperate with all the security agencies as well as lead from the front. Security is everybody’s business. When you have a leader who is leading from the front, others will follow. That is what is happening in Kogi.

“We have people like His Excellency who are supporting our cause. My sincere gratitude to His Excellency for being proactive about security. I can’t remember how many times he has visited the force headquarters, not for himself because he has no reason to; but in his efforts to protect his people. I don’t know how many governors do this.”

Meanwhile, Governor Bello has reiterated the readiness of his administration to resist attempts by some desperate politicians to plunge the state into the pre-2015 era of insecurity in the guise of playing politics.

The Chief security officer of the state also said credible intelligence report at the disposal of the state government had revealed that actions of some politicians were capable of truncating the peace currently enjoyed in the state, stressing that his administration would not allow insecurity to be smuggled into Kogi through the “boot of politics”.

He use the opportunity to appreciate and commend men of the Kogi State Police Command, currently under the command of CP Edward Chuka Egbuka, as well as those of the various security agencies operating in the state,

In his words, Bello said, “They stand by day and by night to secure our lives and properties. We recognise their sacrifice and dedication and we do owe them a weight of gratitude for their service. Together they form a formidable wall of defence for my people and state.”

Giving insight on how insecurity was tackled in Kogi, the governor said, “It is well known that prior to the inception of the current administration, our citizens lived in perpetual fear from rampaging insecurity of all kinds including high rates of terrorism, kidnapping, bank robbery, violent political agitations, pipeline vandalism, herdsmen/farmers conflicts, inter- and intra-communal clashes, campus and other forms of cultism, amongst others.

“By the grace of God, over the last 7 years my administration has done its best to supply both the tools and the allied morale boosters that our officers need to excel. In our first year, we were able to buy and distribute over 200 patrol vans, over 500 motorcycles and thousands of communications and tactical equipment to the services. We also continue to provide regular maintenance and logistical support.

“In addition, we established a Joint Task Force, Operation Total Freedom, for them which allowed the Police, the Armed Forces and all the other Security Services, including our community policing network (the Kogi State Vigilante Services), to work in tandem, sharing intel and collaborating real-time in operations. In this way we were able to tackle the distrust existing among the services and which is the root of the lack of synergy hampering their effectiveness.”

Governor Bello attributed his success in security to the combined efforts of the state government and security agencies, saying, “On February 8th, 2017 I received the Special Award for Excellence In Security Governance confered on me by the then Inspector-General of Police, Ibrahim Kpotun Idris. It was the first award of its kind on a sitting Governor by the Nigerian Police. Till today the Nigerian Police Force has not seen it fit to bestow it on any other.

“On December 26, 2020 Major-General MG Ali, Commander of the Special Forces Battalion of the Nigerian Army gave me a highly cherished honourable mention during a public speech and held up our security model as worthy of emulation by other leaders.

“On October 21, 2022, President Muhammadu Buhari presented me with the Distinguished Award for Security Management at the 2022 Nigerian Excellence Awards in Public, held in Abuja.”