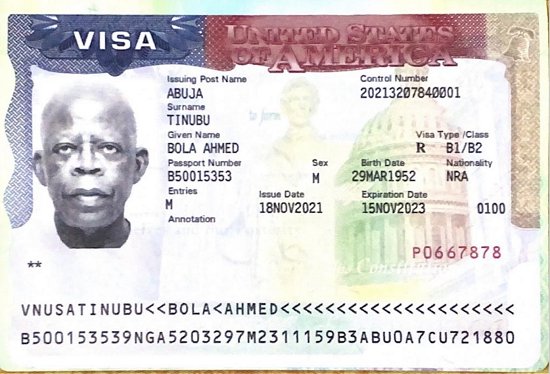 The Twitter post was meant to refute rumours going round that the All Progressives Congress, APC candidate has been denied visa by the U.S. Government.

The APC Campaign Council had earlier in a statement said Asiwaju Tinubu would be embarking on a foreign trip between December 4 and 12, to meet Western leaders and pitch his Presidential aspirations.

According to the statement; “The APC presidential candidate will travel to key Western capitals from December 4th and he’s expected to return to Nigeria latest December 12th to continue his campaign rallies and stakeholders’ engagement.

“Tinubu and his delegation will be in London, USA, France and key European Union member states to share his vision and plans and to also solicit the support of the Western powers for the democratic process that will usher in a new administration from May 29th, 2023.”

Meanwhile, rumours began to spread that Tinubu was denied entry into the US based on some allegations levelled against him.

In a swift reaction, Keyamo immediately shared a picture of Tinubu’s American visa on his verified Twitter handle @fKeyamo to shut down the rumours.

His words: “For mischief-makers, who peddle unfounded rumours about @officialABAT being denied a visa to the US, you leave us with no option but to show you his current visa (that has always been renewed since time immemorial). This is for the misguided ones, who believe these rumours,” he concluded.