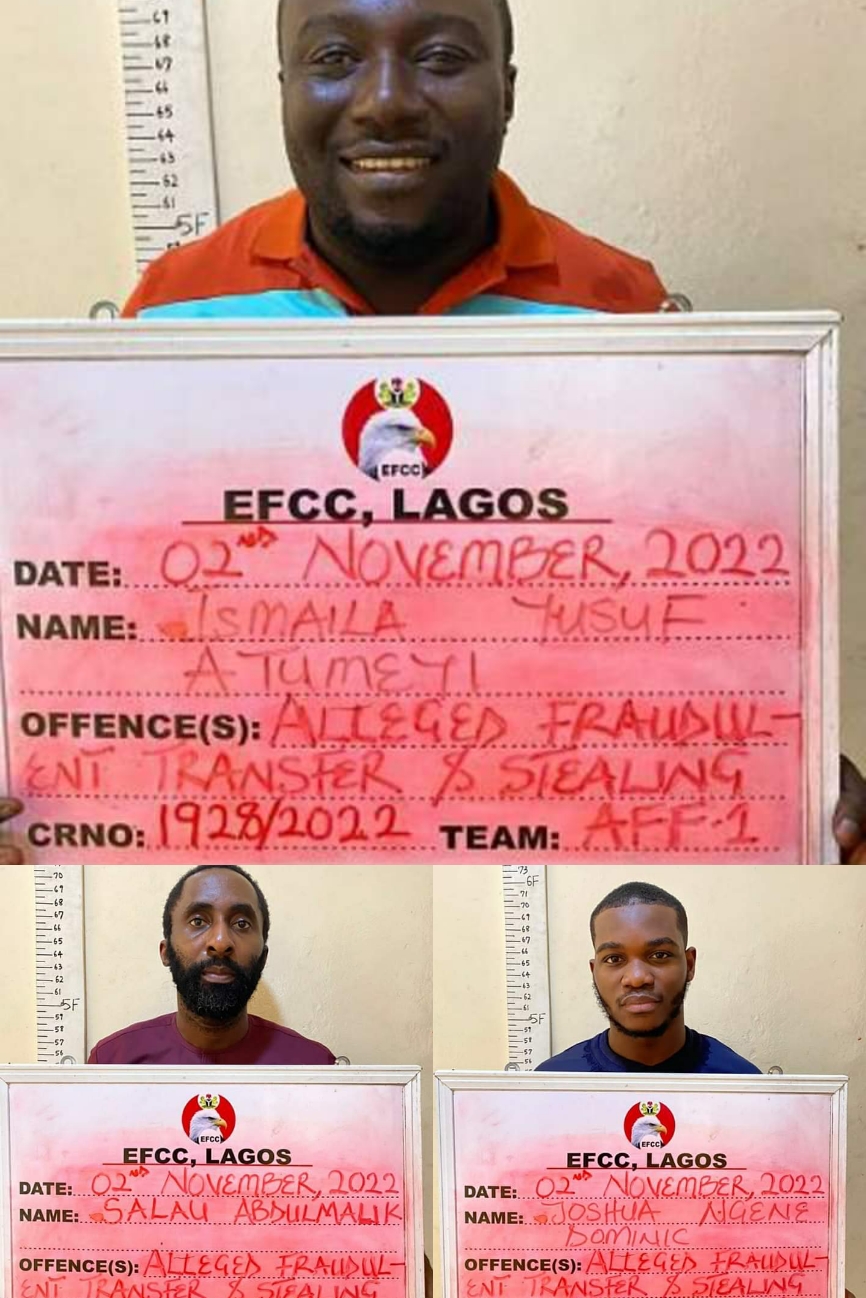 This is not the best of time for Kogi State House of Assembly candidate Ismaila Yousuf Atumeyi, as the Economic and Financial Crimes Commission, EFCC, docked the aspirant and two others before a Lagos Federal High Court, in connection with an alleged hacking of an old generation bank and fraud of N1,403,343,400 billion.

Ismaila Yousuf Atumeyi, alongside Ngene Joshua Dominic and Abdulmalik Salau Femi, a former employee of Union Bank were arraigned before the court on Monday.

Atumeyi is the Kogi State House of Assembly candidate of the New Nigeria Peoples Party, NNPP, for Ankpa 11 Constituency.

The EFCC, through its counsel Mr. Rotimi Oyedepo (SAN) slammed the three defendants in an 18-count charge bordering on concealment of proceeds of fraud, money laundering and cybercrime against the defendants before the court presided over by Justice Tijjani Ringim.

The Senior Advocate informed the court in a charge numbered FHC/L/651C/2022, that the defendants committed the alleged offences between the months of August and October, 2022 in Lagos.

He said the three defendants conspired among themselves to “directly conceal” the N1.4 billion in the account of Fav Oil and Gas Limited, “which sum you reasonably ought to have known forms part of the proceeds of your unlawful activity and you thereby committed an offence contrary to sections 18 (a), 15 (2) (a) of the Money Laundering Prohibition Act, 2011 as amended and punishable under Section 15 (3) of the same Act.

At their arraignment, Oyedepo, prayed for accelerated hearing of the case, said the anti-graft agency intends to call six witnesses against the defendants.

However, the suspects pleaded not guilty.

In view of their pleas, the prosecution counsel, Oyedepo, SAN, submitted that “By virtue of the Section 273 of the Administration of Criminal Justice Act, ACJA, the defendants, having pleaded “not guilty” to all the allegations contained in the charge, are deemed to have put themselves up for trial.

“Therefore, we will, with all humility, ask your Lordship for the acceleration of this trial.

“My Lord, the Section 300 of the ACJA also expects the prosecution to give a very brief summary of the case it has against the defendants.

“We have listed six witnesses through whom the prosecution will explain to the court how the defendants agreed among themselves to hack into the database of Union Bank Plc, transferred funds belonging to the Bank and its customers and used the proceeds of this unlawful activity to acquire properties for themselves.

“My Lord, the prosecution will also show to the court how the third defendant, being a former staff of Union Bank Plc, and working with the others, succeeded in hacking into the database of the Bank.

“The defendants, in different installments, moved the sum of over N1.4bn into the accounts of FAV Oil and Gas Limited and Atus Homes Limited.

“My lord, the case is such that, in its nature, requires the cooperation of both the prosecution and the defence team to see its expeditious determination.

“I, therefore, urge your lordship, pending the determination of the case, to remand the defendants in a correctional facility, where adequately trained personnel will see to their welfare and wellbeing.”

“Having pleaded “not guilty” to the charges, they are constitutionally and legally under the presumption of innocence until otherwise determined by the court.

“The prosecution has responded to the application by serving on the first and second defendants a counter filed on December 5, 2022.

“In order to cooperate with an expeditious and speedy dispensation of the case, we are prepared to move the application for bail.

“The application for bail for the first and second defendant is ready for hearing. The summons for bail is dated November 30, 2022. Since it seeks admission of the defendants to bail in very liberal terms, the grounds of the application are well stated in the summons.”

Ayorinde, who described the offence is bailable, stated that the defendants, “who were arrested and detained as far back as November 1, 2022,” would not jump bail.

He added that “they do not have the capacity to interfere with the evidence.”

While adopting the submissions contained in the written address, he prayed the court to grant the application for bail for the first and second defendants.

In response, the prosecution counsel, Oyedepo, however, told the court that Ayorinde had not replied to the counter-affidavit to the bail application.

Justice Ringim, in his ruling, ordered Ayorinde not to make further submission on the bail application, as he had not replied to the counter-affidavit to the bail filed by the prosecution.

In his further reaction, Ayorinde stated that the “incarceration of the first and second defendants ought not to continue, even if on some terms. Their rights to bail have not been taken away; the charges preferred against them are bailable.”

In his submission, counsel to the third defendant, Babatunde Ogunwo, aligned with the argument of Ayorinde.

According to him, “This is so because the allegations for which the prosecution has presented against the third defendant revolves around that which the first and second defendants have also been arraigned before the court.”

The prosecution counsel, in response, told the court that “My Lord, he hasn’t filed any application. And if he has, he hasn’t served us.”

Ogunwo, who expressed shock, told the court that the bail application dated Friday, December 2, 2022 was filed the same day.

Justice Ringim ordered Ogunwo not to move the application, maintaining that “it is not in the court’s file; it is not before me.”

While further objecting to the bail application for the first and second defendants, Oyedepo told the court that the 20-paragraph counter-affidavit was deposed to by Michael John, an officer of the EFCC today, December 5, 2022.

“We rely on the submissions in the 20-paragraph counter-affidavit and urge your lordship to refuse the bail application for the first and second defendants.

“We also adopt the submission therein.

“My Lord, failure, on the part of the counsel to the first and second defendants to reply to the counter-affidavit, is deemed as admission of the facts contained therein.

“In the very unlikely event that the court disagrees with our submissions, we pray your lordship to impose such conditions that will secure the attendance of the defendants, particularly the first and second defendants whose applications are being argued.”

Justice Ringim adjourned to Tuesday, December 6, 2022 for ruling on the bail application of the first and second defendants.