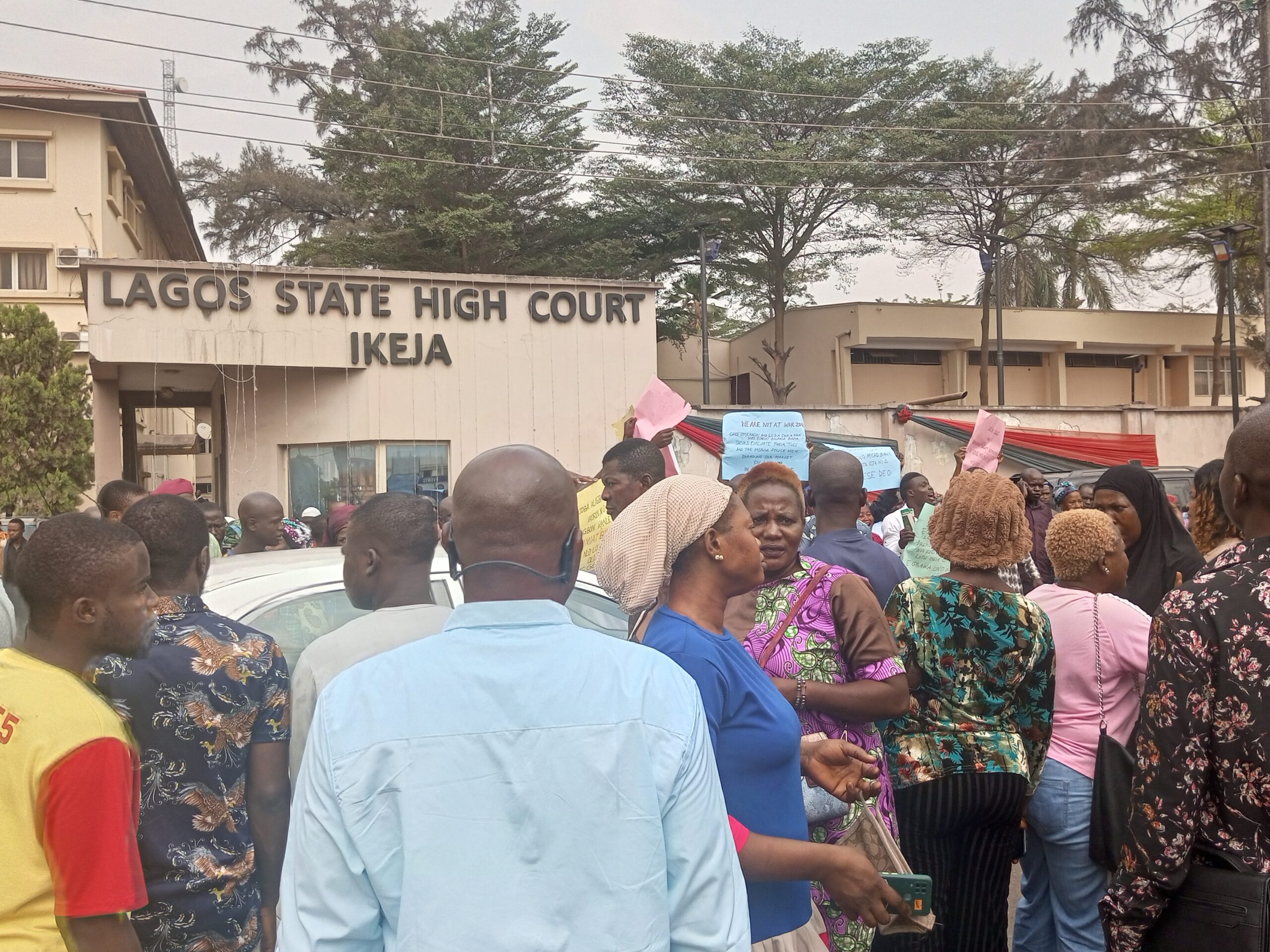 On Thursday, traders from the Alaba Section of Mile 12 Market, situated in Kosofe area of Lagos stormed the State High Court in Ikeja in protest of the destruction of parts of their market by the Lagos State Government and its contractors.

The marketers are angry that their means of livelihood are being taken away from them due to the demolition of 795 shops at the Alaba Mile 12 market.

They claimed that despite a subsisting court order, building work is being carried on by the Kosofe Local Government; Ikosi/Isheri Local Council Development Area; Dr. Chris Onyekachi; Total Value Integrated Services Limited; Attorney General and Commissioner for Justice, Lagos State; and Ministry of Physical Planning and Urban Development, all six respondents/defendants who have been dragged to court over the destruction.

Speaking to CASEFILE during the protest, Yeye Dupe Ojo, the Iya Oloja of Orisunmbare association amidst tears said, “My reason for coming to court is to seek for justice for my poor people, these people with meagre income.

The marketers have also claimed that three traders have died as a result of the demolition in the market.

She said they approached the court for justice when the Iyaloja General of Lagos State, Mrs. Iyabo Ojo refused to plead in behalf of those affected but urged them collect forms and make payment.

She however said she does not think the destruction was politically motivated. Her words, “I am a member of APC and I’m the apex leader in that LCDA, I am not just a youth, I am a senior citizen in the LCDA.

She asked government to stop further demolition of the market, “We should go to the table and talk about what the benefits are.”

The market leader also asked for compensation on behalf affected traders. According to her, “They should compensate my people, we welcome renovation, we welcome when we talk at the table, we don’t want war or violence.

“I have lost three of my women within one week, they have died as a result of shock.”

“I have their names, one is Mujidat Suleiman, the other one is Adejoke Olawoye, and the third one is Mr. Ademola.”

The market leader of the demolished Alaba section lamented their plight stating that on 26th of October, a notice of contravention was pasted, by the Lagos State Government who commenced demolition two days after the notice.

Counsel to the Claimant, Mr. Mutiu Quadri from G Kolawole & Co Chambers, explained that Justice Lateefat Oluyemi of the Lagos State High Court at yesterday’s proceedings granted his client an interim injunction till 30th of March, 2023.

The lawyer also said the court has instructed and ordered the respondents/defendants to desist from further occupation of the Alaba Section of Mile 12 Market.

He said the court stopped them from continuing construction of the said market.

He however said that the government have violated the order but the court gave a stiff warning to desist from continuing their action.

He however said failure to comply with the court order could trigger an application for contempt of court.

Mr. Quadri described the incident as a humanitarian crisis. According to him, the shops, their means of livelihood was illegally destroyed overnight on the basis of an order from Ikosi Isheri LCDA. It is sad because this is her constituency, given that this is an election period, putting the poor people in a state of economic doldrum.

He said it is very painful, adding that those carrying out the illegal demolition may have forgotten that the property was acquired originally from Somolu Local Government, and later Ikosi Isheri to Kosofe.

He said the property was legally acquired and developed with private resources. He is calling for justice. He said the order has now been extended to March adding that he will now commence contempt of court proceedings against the Lagos state government and the other defendants in the suit.

CASEFILE gathered that an extension on the interim injunction was granted in favour of the traders in Mile 12 Market, Ikosi-Isheri, till the 30th of March 2023, pending the determination of the Motion on Notice.

Also speaking, a leader in the electronic section, Mr. Titus Ezeugo, who said he is now 70 year old said the land was allocated to them by the Lagos State Government and that they developed the market with private money.

He said they have papers of allocation with receipt of payments, adding that the Lagos State government should tell them what they want, that they will be able to upgrade the market to the level they want.

He said that he wonders what will become of his fate now that his shops have been demolished.

Otunba Jaye Lawson, the contractor JDON Global Investment Limited, whose company built the Alaba Mile 12 Market in 1995 said the market was not built by government but by private developers.

He said that since the market was built, the traders have been making payment to government and that some of those who collected loans have not been able to offset the loans.

He said the market was approved by the Lagos State Government.

He said what will he and his family live on now that he is at retirement age, he said he is therefore calling for justice.

The matter was adjourned to the 30th of March, as claimant’s counsel sought an adjournment to enable them file the necessary applications.