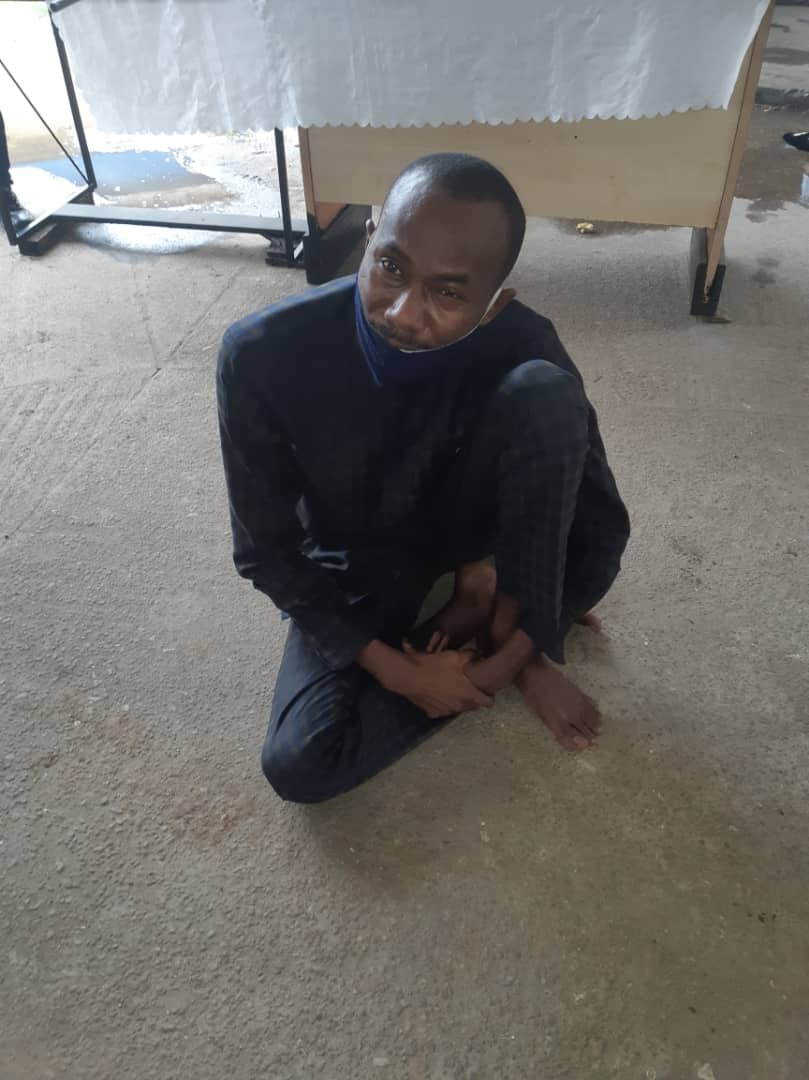 An unsuspecting lover who is based in the United States of America has reportedly lost the sum of $25,000 US Dollars to a man she loved and trusted.

The suspect is a 43-year old man, Sylvester  Ehiarinmian who has been nabbed by the Nigerian Police for allegedly defrauding his United State-based lover of her properties and money.

The suspect claimed to love the victim, Mary Okpe, 40, while he fraudulently swindled her of monies and properties under the guise of helping to secure them.
While parading the suspect on Wednesday, the Assistant Inspector General of Police, AIG Ahmed Illiyasu at Zone 2 Command Headquarter, Onikan, Lagos said the suspect was arrested following a petition to the Command by the victim, Mary.

According to AIG Illiyasu, the victim who has a vision of setting up a business back home employed the suspect Sylvester to provide her with security to and from her farm situated in the Federal Capital Territory, Abuja.

Sylvester who is married with children however made love advances at the victim, promising her marriage which she naively accepted and she was defrauded.

The AIG further said that the suspect was nabbed by the Zonal Tactical/ monitoring unit of the Command.

“When the suspect was finally arrested, four Sienna Space buses, a Toyota Highlander SUV Jeep and landed properties comprising of a story building, an undeveloped plot of land, both in Apo area of Abuja and another two plots in Wasa area of Abuja were recovered from the suspect.

“Also, a Milkano generating set, two duplexes in South Africa, the sum of $1500 US Dollars he fraudulently obtained from the victim to procure visa for the victim’s sister, another $10,000 US Dollars he proposed to purchase carpets for an office they both agreed to operate and N40million for the establishment of a medical laboratory belonging to the victim are yet to be recovered from the suspect.

However, the suspect while speaking to pressmen denied the allegation of fraud leveled against him.

He said:”I never defrauded her, we were lovers and most of the things I was alleged to have stolen from her were handed over to me herself.

“When she heard me discussing my business plan with someone, she offered to assist me with the vehicles and I did not even use them because the business has not started and instead of her to take the things back from me, she started embarrassing me and I asked her to take me to court but she refused. She claims that she has a cousin that knows the powers that be and that she will embarrass me. I never convert her properties to my names, the only properties I have in my name were the ones I bought myself, the reason her properties were in my custody is because I was the one managing them for her,” he said.

The suspect further disclosed that he dated the victim for a year. “I am married but got separated from my wife and my girlfriend (the victim) was also married with two kids but she lied to me about it until I discovered not too long that she was not even divorced.

AIG Illiyasu has however warned citizens to be careful of the relationship they have with people and how they advertise their businesses because of fraudsters who are out to defraud unsuspecting victims.