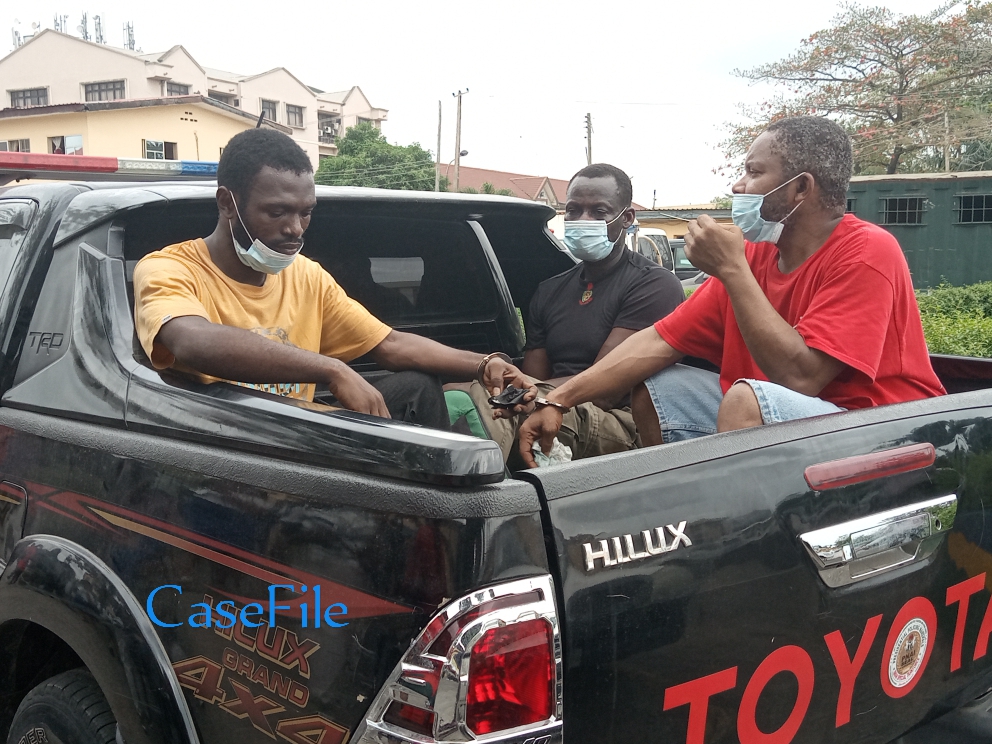 The Lagos State Police Commissioner of Police, CP Hakeem Odumosu has paraded one Benjamin Steve, who claims to be Commander, Anti-Corruption Campaign on Multiple Taxation and other crimes, IMAN, Lagos State, a non-existing non-governmental body.

Benjamin Steve and six other persons arrested on February 1, 2021 according to CP Odumosu, during a briefing at the Lagos State Police Command Headquarters, Ikeja on Monday were arrested in connection with a case of impersonation, stealing and conduct likely to cause breach of peace.

The men were allegedly involved in illegal operation as IMAN Special Taskforce.

But Benjamin Steve who spoke on behalf of his alleged accomplices claimed they worked based on signals from Police high authority.

The Police boss informed journalists that the suspects have been impersonating as Presidential Policing Marshals.

Parading the suspects before the press, CP Odumosu said they usually operate in fully kitted uniforms.

He also said a branded Toyota Hilux with Reg. No KRD 990 AP with the inscription of “Presidential Policing Marshals, IMAN Special Taskforce has been seized.

The suspects said they are Presidential Policing Marshals, the police boss told the press while reeling out the Command’s achievements between January and mid-March, 2021.

The suspect were said to have hijacked and diverted two containers load of goods, claiming they got an instruction to confiscate same from the office of National Security Adviser, ONSA.

Police boss said they were initially reported at Area ’B’ Command Headquarters and subsequently transferred to the SCID Yaba, for discreet investigation.

Odumosu explained that the office of the National Security Adviser, NSA, has debunked the claims, stressing that they didn’t know them nor have any relationship with them.

Police has confisticated the containers and one branded Toyota Hilux with Reg. No KRD 990 AP and inscription of “Presidential Policing Marshals, IMAN Special Taskforce.’’

Benjamin Steve, while speaking in an interview said he is a member of IMAN.

Meanwhile the statistics of the command’s achievements between January, 2021 and February, 2021 and some of the cases recorded as follows: Period January -Mid March, 2021

No of Okada Seized for Traffic  Offences 2,953

Vehicles Contravened for Driving  against Traffic  82

No of Clubs/Bars Raided for COVID-19 protocols 22

No of Suspects (Clubbers) Arrested for COVID-19 Offences 997

In addition to the above figures, below is the summary of the cases/suspects being paraded on March 22, 2021:

No of Cases: (Armed Robbery 3,

No of Armed/Robbery Suspects: (21 but in Correctional Centre)

Traffic Robbery: Total No of Suspects being Paraded: