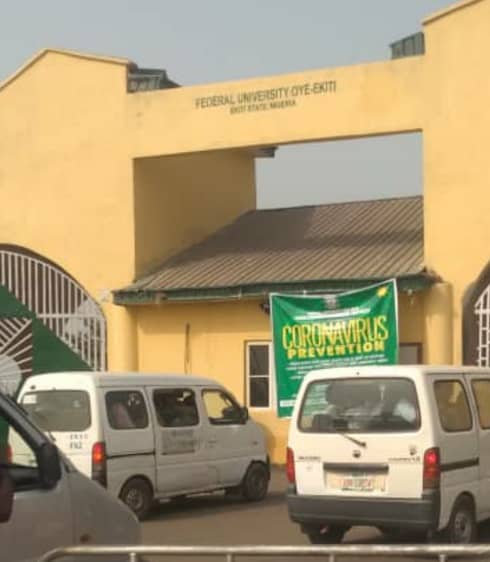 The embattled former Registrar of Federal University, Oye Ekiti, Ekiti State, FUOYE, Olatunbosun Odusanya has asked the Senate President Dr. Ahmed Lawan to reinstate him back to his post.

Odusanya said the termination of his appointment by the University did not follow due process and should be nullified.

The request was contained in a petition dated April 28, 2021 sent to the Senate President, Dr. Lawan through the Chairman, Senate Committee on Ethics and Public Petitions, National Assembly Complex, Abuja.

It was titled: “Petition Against the University Governing Council and the Vice Chancellor for Wrongful Re-type Appointment Without Due Process for Offence Not Committed”.

Odusanya alleged bias on the part of Governing Council.

Aside that the termination of his appointment did not follow due process, he also claimed that the council’s undue and unmerited punishment was wrongfully directed at him for an offence he did not commit.

According to him, “the appointment of Acting Registrar was made prior to my suspension which confirms that it was a predetermined action.”

He said the University has a procedure for disciplining a Principal Officer.

“When there is an allegation, it must be established.

Independent investigation committee should be set up.

“The committee determines whether there is need to issue a query or not. If there is no need for a query the process ends.

“A well constituted council will look at the findings of the investigation committee.

“Hence, council will set up a disciplinary committed to suggest appropriate disciplinary measure by way of recommendations.

The Council will then consider the disciplinary committee recommendations.

Thereafter, another well constituted council committee will look at it again and take decision(s)”, he explained.

He faulted the procedure applied in determining his case.

He said: “The investigation/fact finding committee was not constituted.

“When it was being discussed, the Registrar and the Bursar were excused and were denied the privilege to be part of the discussion. There was no fact finding committee; the matter was referred straight to the disciplinary committee and a query was issued by the Vice-Chancellor to the Registrar.”

He contended that termination of appointment can never be the punishment for a purported offence of misconduct.

To buttress the claim that his termination was pre-determined, he said an acting Registrar was appointed on April 19, 2021 without his knowledge while he was still the substantive Registrar.

“Consequently, Professor Abayomi Fasina, on being selected as the VC vowed never to work with the Registrar and the Bursar, who he felt were too loyal to the former Vice Chancellor.

“Since Professor Abayomi Fasina became the Vice chancellor, he has issued four queries, each, to the Registrar and the Bursar; all to create a wrong impression of the two Principal Officers.”

Odusanya disagreed with the council’s reasons for termination of his appointment.

He said there was an over-employment but that the Deans and Heads of Departments, HODs, were not carried along during the recruitment exercise.

“The registrar raised observation at every point of the recruitment exercise but, the Vice Chancellor, at the time, Prof Kayode Soremekun, directed, as appropriate.

“All the allegations on employment should have been directed to the former Vice-Chancellor who had the executive powers to appoint on behalf of council. The Registrar is to carry out the directives of the Vice Chancellor and advise where necessary.”

He stated further: “All the procedures, in relation to the recruitment exercise were followed, and that the Registrar, acted on formal directives of the Vice Chancellor for the appointments of teaching and non-teaching staff.

There was a declaration of vacancies; “Approval to employ was sought and was granted by the Head of Service of the Federation.

Waiver not to advertise was also granted by the Federal Character Commission; Applicants were shortlisted for various positions as appropriate.

“The Vice-Chancellor/Chief Executive approved the issuance of temporary letters of appointment to be regularized in due course; Certificate of compliance would be issued by the Federal Character Commission, for the exercise, after the regularization exercise.”

He said on Monday April 19, 2021, when the disciplinary committee met, “they concluded that they have found me guilty of an offence on which I had not been interrogated. As a result, a suspension letter was issued on the 20th April, 2021. On that same day, they requested that I should come for an interaction on April 22, 2021 without telling me the purpose of the interaction.”