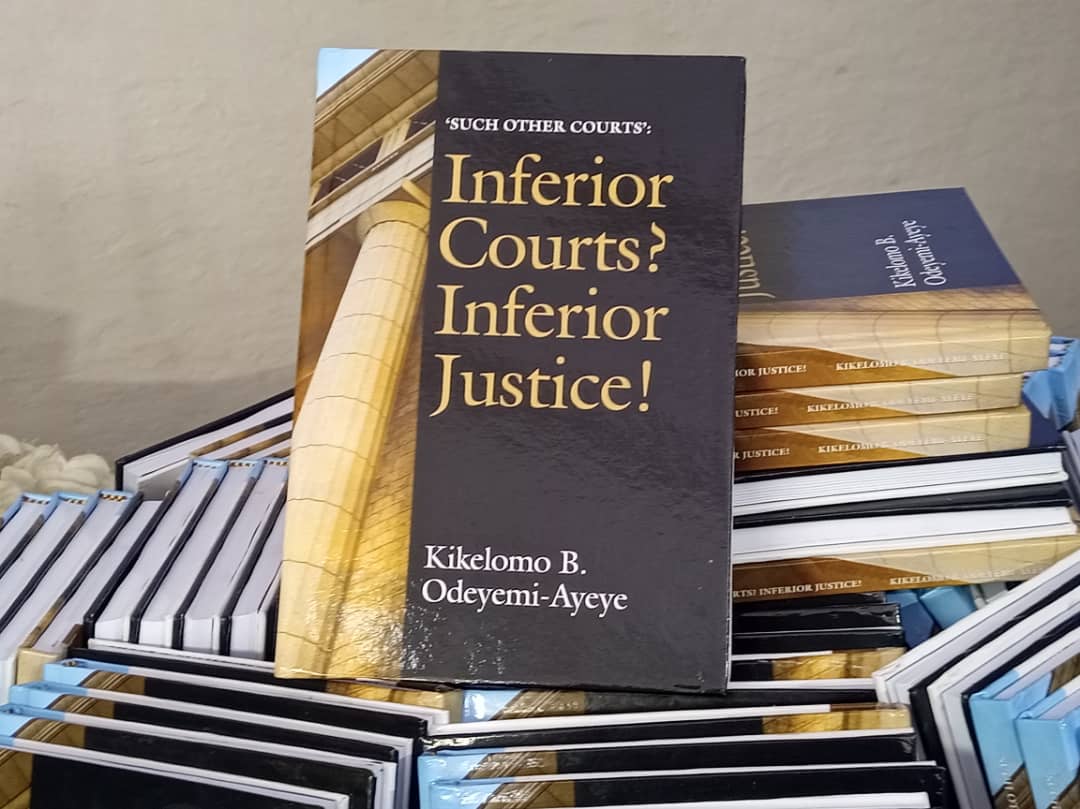 An officer in the Lagos State Magistracy, Chief Magistrate Kikelomo B. Odeyemi-Ayeye has called for reform of the magistrate court system and the elevation of magistrates to the status of judges in the country.

She made the call on Thursday while unveiling a-160 page book, titled: ‘Such Other Courts’: Inferior Courts? Inferior Justice! authored by her.

According to Magistrate Kikelomo Ayeye the court is not inferior by any standard because ”we dispense justice.”

She advocated that that court should be treated as a Court of Limited Jurisdiction, as it is obtainable in other climes.

She demanded for re-organisation of the Magistracy system by law reformers.

She explained that the current status of magistrates over the time has affected their payroll, pension, condition of service and dignity of person.

She said, “I am calling on Law Reformers especially the Chairman, House Committee on Judiciary to re-enact the Magistrate Court Law, 2009.”

“It is due for re-enactment and re-enact us as Court of Limited Jurisdiction and name us with our Jury, name us District Judges and District Court, we are not Magistrate,” she said.

Abike Dabiri-Erewa, Chairperson, Nigerian in Diaspora Commission speaking at the event noted that Nigeria appears to have issues with certain nomenclature, stating that she found it awkward when the legislative arm of government is being described as Upper or Lower House and some Ministers are referred to as Senior or Junior Minister.

According to her, “I think what you are saying here is that they should go beyond that.

“It is about institutions, the service, diligence, putting in your best and ensuring that the system works.”

She encouraged judicial sector stakeholders present at the event to take the conversation to those that should listen and hear.

“I in my own capacity will do so.”

“And we all know that we need judicial reforms, if the Judiciary fails in Nigeria, we have failed as a nation.

She showered encomiums on the author saying, “Thank you for putting this together, for contributing your own quota to the development and to strengthening this fantastic institution.”

The Lagos State Judiciary Administration Judge, Honourable Justice Oyekan Abdullahi unveiled the book to the admiration of all present.

She noted that people are to drive the cause of Justice.

She acknowledged the effort of the author for writing a book at an auspicious time in the history of the country.

“…This means a lot to me and to all the generations of lawyers that are here present.

She said further, “I think this book is more of a research book. Indeed, it is a reference book for even the Legislature because in considering change in the Judiciary, you must read this book.”

“The ‘Inferior’ referred to here, is not on the personal or the person sitting on the Magistracy but in the tag which the constitution has put them.

“That tag must be released. We need that tag to be released and if anyone reads this book, he will see the urgency and the need that this must be done.

Mrs. Titilola Akinlawon, a Senior Advocate of Nigeria, reviewed the book and has this to say, “The book is well researched and is filled with very detailed account of the Judicial system in the Magistrate Court.

She also said she adopted the foreward written by Festus Keyamo, SAN, Hon. Minister of State, Labour and Employment, which says “this book is a veritable resource and I do not hesitate to recommend it to legal Practitioners, Magistrates, Law students, Political and thought Leaders, Law Reformers as well as laymen.”

Chairman of Lagos State Law Reform Commission, Mr. Kemi Pinheiro, SAN opined that substandard justice is not in tandem with the Magistrate Court, he promised to read the book and send his response to the author.

He said in Lagos State, work is being done on 52 laws that would be reviewed.

He was optimistic of good law reforms on the Civil and Criminal Justice Law in Lagos State.

He also commended the writer for writing the book during the hit of COVID-19 pandemic.

“I commend you and I hope this will be the beginning of several other books you will write.”