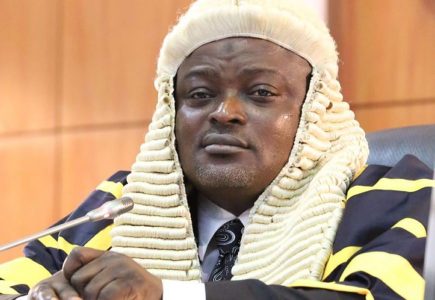 Legal Practitioner, Yakubu Arowoshola Eleto ESQ, has described the treatment he got in the hands of Rt. Honourable Mudashiru Obasa, Speaker, Lagos State House of Assembly, LSHA, his Chief Security Officer, CSO, some officers attached to the Rapid Response Squad, RRS and the Nigerian Police Force as nothing but torture and brutality.

The lawyer accused the lawmaker of complicity in his alledged mistreatment by state security personnel.

Disclosing this to CASEFILE on Monday, Eleto said the CSO to the Speaker was quoted as saying that ‘I came to the assembly with a destructive mission and that he has the instructions to deal with me.’

But the lawyer explained that he only sought to submit a court notice the Lagos State House of Assembly that is a co-defendants in a suit he instituted on behalf of some of his clients who are faulting the unconstitutionality of the Local Council Election that is forthcoming this weekend in the State.

MY EXPERIENCE IN THE HANDS OF THE CHIEF SECURITY OFFICER (CSO) TO THE SPEAKER, LAGOS STATE HOUSE OF ASSEMBLY, THE MEMBERS OF THE RAPID RESPONSE SQUAD (RRS) (CAR, WITH PLATE NUMBER RRS 387 LA), AND THE MEN OF THE NIGERIAN POLICE FORCE ATTACHED TO THE ALAUSA POLICE STATION, LAGOS STATE COMMAND, IKEJA, LAGOS STATE; INCIDENT WHICH HAPPENED ON THE 15TH DAY OF JULY, 2021 BY 11:16 AM AT THE 2ND GATE OF THE LAGOS STATE HOUSE OF ASSEMBLY.
I am YAKUBU AROWOSHOLA ELETO ESQ, a legal practitioner in Lagos State and a human rights activist, with indigene bias.
The facts below are what happened to me at the Lagos State House Assembly complex on the 15th day of July 2021 at 11:16 am.

I instituted an action on the instruction of some of my clients against the unconstitutionality of the forthcoming local council elections in Lagos State and joined the Lagos State Independent Electoral Commission (LASIEC) and Lagos State House of Assembly (LSHA) as co-defendants.

Both LASIEC and LSHA were served the copies of the court processes on the 9th and 12th July 2021 respectively.

The copies for the house of assembly were received by the office of the clerk on the 12th day of July by 8:30 am.

The suit in question with no: FHC/L/CS/741/2021 came up for hearing on the 12th day of July 2021 where myself and three other lawyers represented the applicants.

On that faithful day, I moved a motion exparte for an interim injunction restraining LASIEC from going ahead with the election but it was overruled by the court, where the court said ‘’ruling will have a far-reaching effect on the defendants and the Lagos State in general’’.
The court later instructed us to put the defendants on notice and further adjourned till Monday, the 19th day of July for a hearing of the Motion on Notice and to further determine if LASIEC could go ahead with the elections as scheduled.

I tried getting the ruling from the court but it was not made available to me, even till Thursday, 14th July 2021.
I felt that the whole essence of waiting to collect the ruling was for it to be attached to the letter that would be sent to the defendants; LASIEC & LSHA.

In order not to defeat the essence of going to court on Monday, the 19th day of July 2021, I decided to improvise by following the principle of fair hearing and AUDI ALTEREM PARTEM, I had to write a letter dated Thursday, July 15th, 2021, notifying the parties that the case is coming up for hearing of the Motion on Notice.

I, therefore, instructed someone to submit a copy to LASIEC’ in Yaba and I volunteered to submit that of the assembly myself.

Upon getting to the assembly gate around 11 am on the 16th day of July 2021 to submit the letter, I met a Paramilitary officer who told me point blank that they don’t receive correspondences on Fridays.

I engaged him further, by informing him that it’s not a correspondence per se but a letter notifying the law-making body in Lagos State that there would be a court sitting on Monday, 19th, July 2021 and the LSHA is a necessary party to the suit.

The paramilitary officer quickly called the attention of the head of the securities on duty and he attended to me requesting whether he can be availed a copy of the letter, which I did immediately.
He read the content of the letter and immediately declined collection on behalf of the house and he said the officers stationed for such purposes were busy and that I should either come back on Monday or exercise patience for him to get in touch with a senior officer who could give further direction.
I informed him that the matter was coming up on Monday, therefore the option of coming back on Monday will defeat the purpose, so I would wait instead.
I waited for close to two hours and no one showed up.
I approached him again to inquire about the situation because I’ve been waiting for so long and I need to get back to other activities.
Suddenly, I saw a tall dark young man (later identified as the CSO to the speaker) approaching the gate from the assembly complex, I noticed the police officers on duty adjusted themselves and they became jittery of him.
The said young man approached me and said and I quote, “they said you have been disturbing the securities for the past two hours, what is your problem’’
I replied to him that ‘’I have a letter to submit concerning a court case that would come up on Monday, 19th July at the Federal High Court, Lagos State and the House of Assembly is a party and its important for me to put them on notice’’
He replied further saying ‘’Mr. Man, we are not taking this letter, we have the discretion to determine what or which letter to take’’
I told him in furtherance to the above that can such discretion work when it comes to a public office’’
He replied that I was rude to him and ordered the police officers on duty to throw me out of the complex.
The officers asked me to leave under the young man’s directive.
The man left immediately.
I met the policeman again, can I meet the head of the Legal Department or the clerk of the assembly or anyone working with the clerk?
The officers declined that it wasn’t possible.
Suddenly, I noticed the CSO returned with eight mobile policemen, the CSO said it point-blank that I came to the assembly with a destructive mission and that he has the instructions to deal with me, he, therefore, asked them to seize my phones, forcefully collected my pens, dragged my shirt, pulled me in the company of the mobile policemen and carried me like a Five-year-old boy to the assembly gate into a waiting police van with plate no RRS 387 LA.
They eventually dragged me on the floor, tear-gassed me, poured pepper spray on my face, brutalized me, dehumanized me and forcefully made me enter the car identified above, and whisked me in a commando manner to the Alausa, Police Station where I was kept behind the counter for till I became unconscious.
Upon regaining my strength, I requested for my phone to call my other colleagues, the policewoman on duty at Alausa Police Station, obliged me my phone, and I called four of my colleagues and asked them to reach out to our seniors in the bar to wit; Mr. Femi Falana and Chief Wahab Shittu.
Immediately, they heard the names I called they asked me to stand up, I didn’t respond as I had no strength left, they ransacked me once again, gave me dirty slaps, used metals on my joints, used their gun to hit me on my thigh while mentioning that I’m proving stubborn.
I became seriously weak, they carried me once again into their van and took me to an unknown destination, they later drove me around Ikeja and back to the House of Assembly, where I was locked in the car with a plate number RRS 387 LA for several hours.
The policemen came back later in the night, returned all my belongings, and said “Oga has asked you to go”.
I left the assembly and went home with stains and pains all over my body.
It was a tough experience and the above facts are within my knowledge.
I use this medium to thank my colleagues in the bar, Senior Lawyers, family, and friends for showing supports to me during the time I spent with police at the Lagos State House of Assembly and torture I received from the hand of the CSO to the speaker, Lagos State House of Assembly.