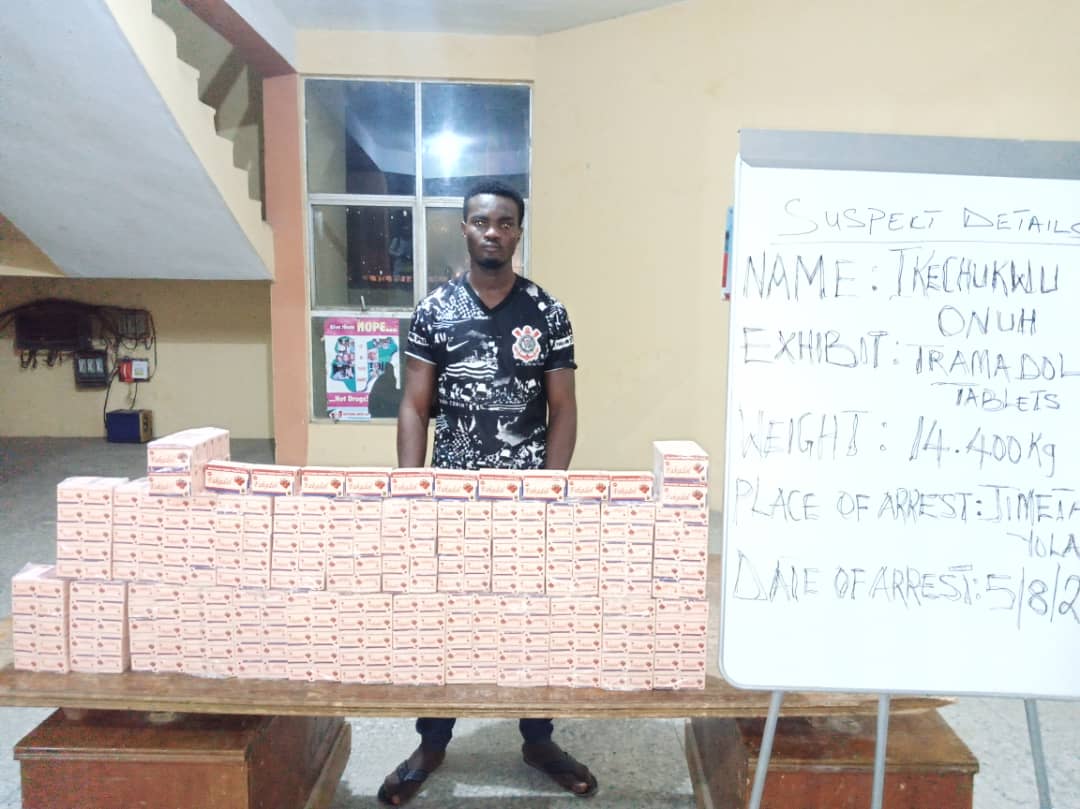 For allegedly trafficking drugs in the country, 15 persons including a woman on a wheelchair have been arrested by the National Drug Law Enforcement Agency, NDLEA.

The people were arrested by operatives of the agency during  ‘offensive action’ operations which began on Sunday 1st August and lasted till Saturday 7th August, 2021 across seven states.

Not less than 8,268.2311kilograms of assorted illicit drugs including cocaine, heroin, tramadol, methamphetamine and skunk were seized among others in the weeklong coordinated raids in Ondo, Akwa Ibom, Adamawa, Enugu, Bauchi Edo and Anambra.

Femi Babafemi, Director, Media & Advocacy, NDLEA stated on Sunday that the bulk of the seized drugs were recovered from Ondo and Edo states.

According to the spokesperson, “In Akure, the Ondo state capital, a 27-year-old Omokayode Adedayo was arrested along Oda road, Akure South Local Government Area with a cocktail of illicit substances including cannabis sativa, cocaine, methamphetamine, tramadol, swinol, and designer drug on Friday 6th August.

“The previous day, Thursday 5th August, men of the Nigerian Army had intercepted 1,025kg of cannabis in Toyota Sequoia numbered FST 169 BW and a Toyota Sienna with APP 918 FA as registration number, at a checkpoint in Isua Akoko, where two fake police officers; Stephen Sunday and Eze Ezenwa were also arrested with 575kg of cannabis being conveyed in a Sienna bus with a fake police registration number NPF 1651D.

“The suspects and exhibits were promptly handed over to the Ondo state command of the agency along with a cash exhibit of N148,300.This was preceded by a raid carried out by operatives of the Ondo state command at Egbeta community, a border town between Ondo and Edo states, where a total of 6,332kilograms of cannabis sativa were recovered and two suspects; Emeka Ossai and Raphael Henry arrested.

“In Akwa Ibom state, raids in parts of the state led to the recovery of 64.903kg of illicit drugs including 1. 2031kg crack cocaine from a 26-year-old Nwoye Ogbonna Solomon, the biggest cocaine seizure in the history of the state.

“In Adamawa state, a drug dealer, Ikechukwu Onuh was arrested at Jimeta, Yola on Thursday 5th August with 14.400kg of tramadol packaged as diclofenac to evade detection.

Also in Enugu, a total of 19.08kg of cocaine and skunk was recovered from three suspects including a 35-year-old physically challenged Iyiogwe Chinenye and 25-year-old Aja Chidi David.

The agency informed further that different quantities of cocaine and heroin were also seized from an 18-year-old drug dealer, Jude Chinedu during raids at Inland town area of Onitsha, Anambra state.

While 59.3kilograms of a psychotropic substance, pentazocine was intercepted in a bus from Jos, Plateau state to Bauchi with the courier arrested, over 148.808kg of different variants of skunk, some of which were meant for students of Igbinendon University, Okada and Edo State Polytechnic, Usen, were recovered from two dealers; Sunday Ojodale Oguche, 21, and Endurance Ehigie, 23 on Wednesday 4th August.

Meanwhile, different quantities of tramadol, methamphetamine and skunk going to the UK, Australia, New Zealand and UAE have been intercepted in two courier firms in Lagos by narcotic officers of the Directorate of Operation and General Investigation, DOGI, in the agency.

Reacting to the outcome of the raids, Gen. Marwa commended the officers and men of the seven commands and DOGI for their diligence and charged them not to rest on their oars.

He said the nationwide offensive action would continue across all commands until the last gram of illicit drug is retrieved from the street.