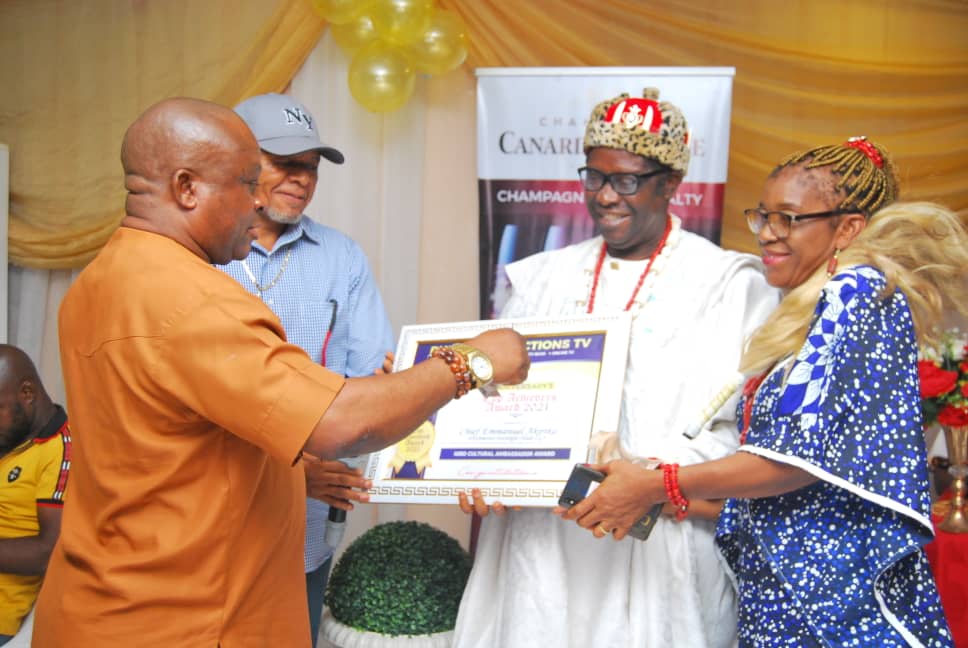 It was euphoric and encomium galore at the recently held Rhema Productions TV #Topachievers Award at De-Santiago Milan Hotel and Suites, Lagos.

The award event which was more of the gathering of Rhema Productions TV’s media top clients, media partners, friends and fans was well attended by celebrities, business moguls and traditional rulers, Chief among them is the Chairman/CEO of Dubas N’Chess Commercial Company Limited Chief Dr. Okwudiba Anyaora (Ijele Oba) the Eze Okpoko II of Oba Designate who also acted in the capacity of the Chairman of the august event.

In his opening remarks he narrated the story of his humble beginning especially how he used to sleep on tables with the award event host Rev. Innocent Chukwudi Peace-Udochukwu at the makeshift shops in Balogun street, Lagos Island in the early 80s when he newly came to Lagos.

Several other awardees who obviously was highly elated showered lots of encomium on the host Rev. Peace on his tenacity, humility, loyalty and value for friendship.

Palpable euphoria filled the venue of the event as the duo of veteran Nollywood actor and former President of Actors Guild of Nigeria, AGN Lagos, Chief Victor Osuagwu and Solid AC the Chief Zegemure of Wazobia FM Lagos kept dishing out ribs cracking jokes to the delight of the audience.

The event came to a climax when the Chairman/CEO of De-Santiago Milan Hotel and Suites Chief Obinna Ugozu (Igwe Ndede) stepped out to receive the Hospitality Industry Platinum Merit Award for the hotel and dolled out about half a million Naira to the organisers of the award event.

The well attended event also have in attendance HRH Eze Augustine Sunday Ojukwu Ezendigbo Na Amuwo Odofin who acted in the capacity of the Royal Father of the day, HRH Eze Emmanuel Chukwuakalikammadu, Ezendigbo Na Oriade LCDA, Mr Okechukwu Maduagwu a director with Hyrit Ventures Ltd, franchise owners of Canard Duchene Champagne which received Platinum Merit Award, a staff of Utec Green Ltd the franchise owners of Champagne Vollereaux was also on hand to receive the Platinum Merit Award won by the Champagne Vollereaux, Chief Emma Otunabo (Ochinanwata) the former General Secretary of Balogun Business Association (BBA), one of the major contenders to the BBA Presidency and franchise owners of Nu Parax Range of Cosmetics who received the Creative CEO of the Year Award.

Also in attendance are Apostle Sunny Anyanwutaku Chairman/CEO of Neat Approach Ltd the franchise owners of Mazuri Range of Cosmetics, Chief Victor Chukwualuka Chukwuigwe MD/CEO of Lukason Elitecreate System Nigeria Ltd got the Creative CEO of the Year 2021 Award, Nollywood actor Christian Paul who received the fastest Rising Nollywood Actor 2021 Award, Iyke Michael, winner of 2005 Fight for Fame Talent Hunt Show organised by Rhema Productions Ltd who received the Most Creative Actor of the Year 2021 Award, Sam Anokam received the Entertainment Writer of the A 2021 Award and a host of other VIP’s and dignitaries too numerous to mention here.

In his vote of thanks, the host Rev. Innocent Chukwudi Peace-Udochukwu President of Rhema Productions Ltd said that the award event was organised to celebrate the one Anniversary of RPTVblog, to appreciate and thank those who have been there for Rhema Productions Ltd a media outfit he started with a four page newsletter which today has grown to an Online/Digital Satellite Broadcasting TV Channel with a fast rising and very popular Blogsite, Rev. Peace who also doubles as the president of Living Fountain Ministries Int’l an Evangelical Outreach stated that many of the awardees have been his clients, media partners, friends and mentors some of which have lasted for about three decades “and ours have been a partnership that works”, he concluded.

According to the organisers of the #Topachievers Award, the Abuja version of the award event will be taking place in about two weeks time at the prestigious D’franklin Apartment and Events Center Abuja.
RPTVBLOG.