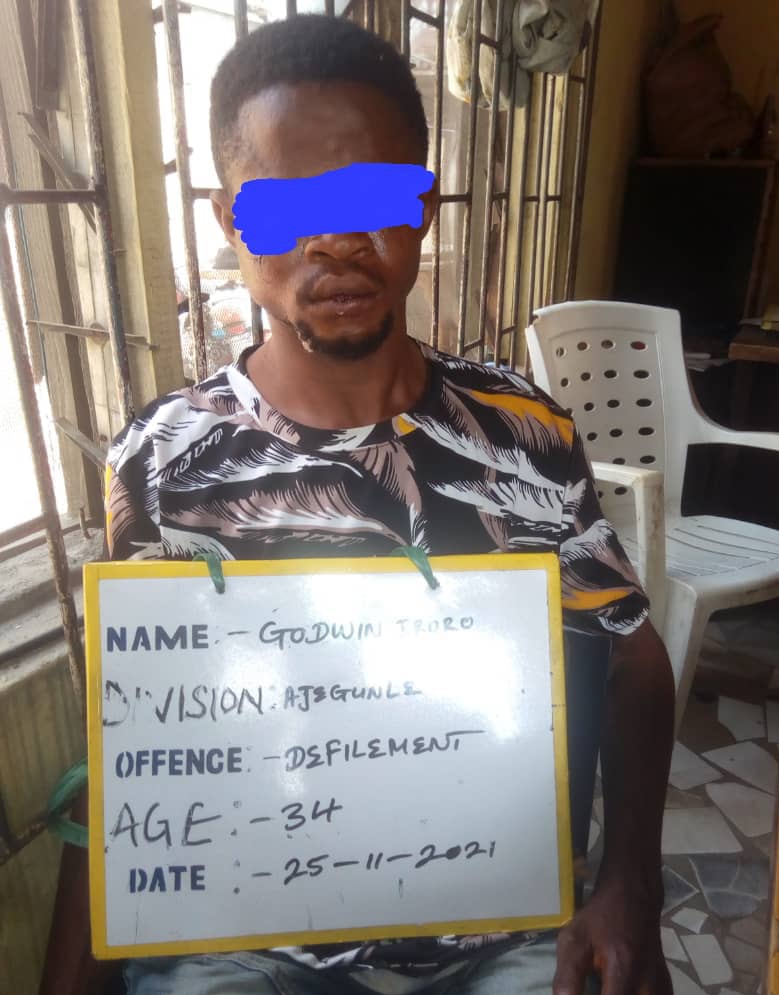 While the world was in the mood with activities to eradicate all forms of violence against women and girls on Thursday 25, being an International Day for the Elimination of Violence against Women and Girls, a-34 year old married man, Godwin Iroro, was arrested for allegedly defiling his friend’s 10 year old daughter.

The Police detectives attached to the Ajegunle Division arrested the suspect at his residence located in Ajegunle, Lagos, where he happened to live on the same premises with his friend.

Information on the preliminary investigation revealed that Godwin had carnal knowledge of her when her father was not at home, Police Public Relations Officer, CSP Adekunle Ajisebutu disclosed.

The bubble burst when the father of the victim noticed the awkward movements of his daughter and asked her what happened to her.

The girl told her father, Chukwudi Chime, his father’s friend who happened to live on the same building with them sexually abused her.

Information gathered by CASEFILE revealed that both friends are separated from their wives.

Also, the victim lives with her father while the suspect’s four children live with their mother in Asaba, Delta State.

Meanwhile, upon interrogation, the suspect has confessed to the crime but blamed it on the devil.

The suspect also confessed to have sexually abused the little girl twice before the evil was uncovered.

This incident has prompted the Commissioner of Police, CP Hakeem Odumosu to direct that the suspect be transferred to the Gender Unit of the Police Command for discreet investigation and diligent prosecution.

He warns that such licentious men who would not keep their restless Penis in check to desist from such contemptible act or face the grave consequences.