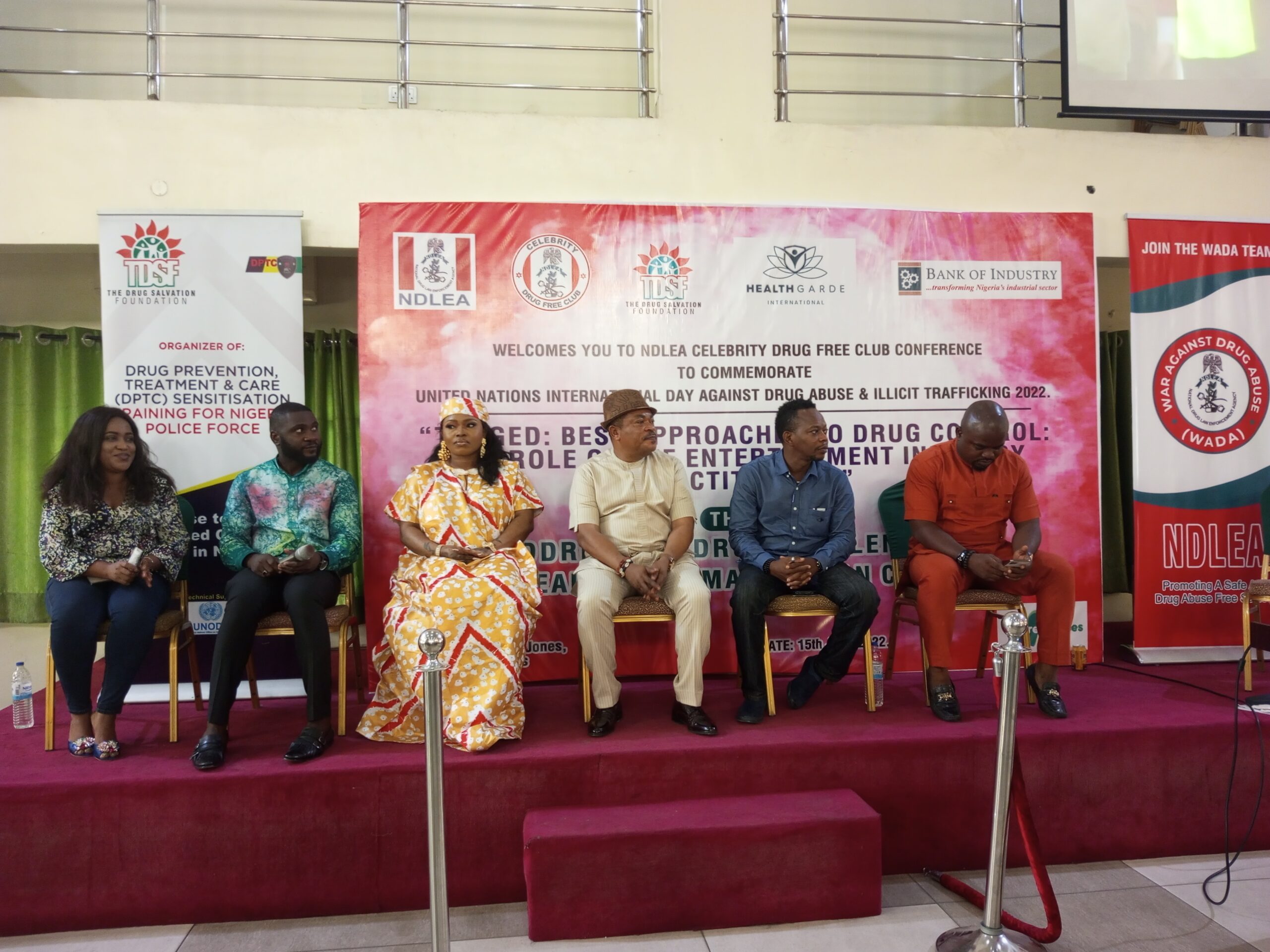 The Celebrity Drug Free Club, an advocacy non-governmental and non-partisan organisation has marked the United Nation International Drug Abuse and Illicit Trafficking 2022 in Lagos on Friday with a conference, advocating for more commitment by the entertainers, in order to fight against drug abuse in the country.

The National Coordinator of the Club, Mr. Wilson Ighodalo is optimistic that through such community intervention programmes the country’s drug problem could be solved.

While speaking in an exclusive interview with CASEFILE, Ighodalo said that participants, particularly the entertainers should take the campaign against drug to the grassroots to curb the scourge.

The event themed: Addressing Drug Challenges in Health and Humanitarian Crisis, harped on the need for practitioners in the entertainment industry, to avoid portraying drug in music and movies.

Participants brainstormed on various approaches to curb the use of illicit drugs among youths.

He noted, “We believe that in fighting against drug abuse the entertainment industry can help the agency in reducing some of the pressures.”

He appealed to the entertainment industry not to send wrong message in the course of trying to entertain. Recommending that,“The best way to sell your content is that you have to be really careful in what you tell your followers.”

“I know that you guys have a lot of followers as celebrities. In the process of doing what you are doing, we implore you not to send the wrong message, and how you do it is that the content of what you give the public must deliberately take notice of whether there’s a drug abuse content,” he said.

“This is where the NDLEA is looking forward to cooperate with the entertainers.

“It is our wish that the entertainment industry will want to cooperate with us to work together.”

The Lagos State Commissioner of Police, Abiodun Alabi, represented by CSP Gbenga Steven said that the challenge of drug in our society could not be over-emphasised.

He commended the NDLEA in the fight against the drug problem in the country. However, he acknowledged the  collaboration of the police.

“Today, drug abuse is on the high side. They are so many of them, India Hemp, Tramadol, Colorado. The effects of these drugs on the youths need to be checked.”

Dissatisfied with the negative effect of drugs on the youth, he said, “That’s why the entertainment industry need to sensitise the youth to stem the harm of drug on them.”

“We cannot close our eyes, we have to ensure that something tangible is done to our youth, that they are being sensitise and to know the effect of these drugs on our society and not only youths, but adults too are doing drugs, he noted.

He charged other communities, like churches to ensure they do enlightenment campaign to sensitise against drug.

He also said that certain drugs are used to check human health but frowned at the way people are abusing them in the society.

Some of the entertainers who were present at the forum also bore their minds in addressing the menace.

A comedian and actor, Kofi Idowu Nuel, advocated a change in the narrative of how government handles drug fight. He noted that government should do more in getting involved in the fight against drug.

He was of the view that the projection of what entertainers send out could not be enough, adding that proper censorship control on content released to the public, should be of concern to the government.

He wants to see collaboration of  agencies such as NDLEA working with National Film and Video Censors Board and the National Broadcasting Company.

“Censor everything before going to the public,” he said during a panel discussion.

Comic actor, Victor Osuagwu explained that there is danger in having jobless youths while fighting drug problem.

He explained that until work is provided for the youth, he fears that the youth will continue to engage in negative vices.

Hence, he urged the government to provide jobs for the youth to combat drug menace. “There must be adequate responsibility to the graduates.”

Other celebrities who graced the occasion hinted on what the security agencies and parents can do to fight against the drug menace.

A member of the Celebrity Drug Free Club, Ambassador Queen Blessing Ebigieson advised parent to teach their children values and be of good example.

She wants parent to create more time and monitor their children’s activities and know their friends.