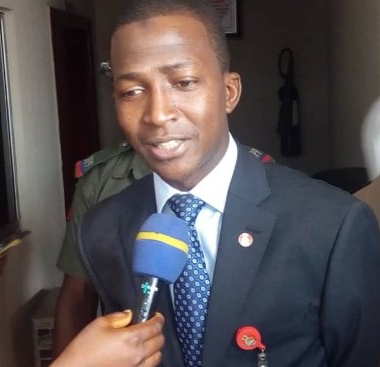 A legal practitioner, Mr. Olaniyi Adekanla, Esq. is seeking the removal of Mr. Abdulrasheed Bawa, from the office of the Lagos Zonal Head of the Economic and Financial Crimes Commission, EFCC.

The lawyer’s grouse against the Lagos Zonal Head of the Anti-Corruption agency borders on corruption tendency.

Speaking at a press conference on Wednesday in Lagos, Adekanla, Esq. stressed that the current zonal head is a misfit for the office.

He held the notion that an organisation at the vanguard of Anti-Corruption crusade should not allow Abdulrasheed Bawa to call the shots at the Lagos Office of the EFCC.

Reiterating his position, the lawyer explained, “It is therefore against this backdrop that the extant development in the Lagos Zonal office of EFCC, to wit its headship by one Abdulrasheed Bawa is considered inappropriate and a deviance to the gravity of sanitization of corruption which led to the establishment of this organisation, hence an erosion and bastadisation of its moral and functional values. For the umpteenth time, Lagos Zone of this institution is too important to be headed by any person carrying stigma of infamy either by allegation or otherwise!”, he said.

Bawa was alledged to have sometime last year confiscated dozens of petrol tankers and sold to his proxies.

“This irked some junior colleagues who wrote anonymous petitions and sequel to which Mr. Bawa was arrested and detained for several days in Port-Harcourt before Magu, former head of the institution who consequently ordered his transfer to the agency’s training school in Abuja.

“Mr. Bawa was accused of selling at least 244 trucks worth between N20 to N30 Million each at N100,000 or slightly more per unit to his proxies! A proxy was said to have sold one of the tankers to a businessman in Ibadan for N14.8Million. This obscene deal was said to have denied Nigeria Government about N4.88 Billion Naira, an amount which is enough to take care of the yearly overhead of the organization, conservatively put at N4.5Million per annum.

“It may interest you to know that while forfeiture proceedings are ongoing no sale of any goods that forms subject matter of the criminal allegation can be made. In contradistinction to this avowed position Mr. Bawa put those trucks that were subject matter of criminal litigation at Federal High Court for sale.”

He expressed that it is unfortunate that Mr. Abdulrasheed Bawa was rewarded with the headship of EFCC Lagos Zonal Division.

Juxtaposing his concerns, Mr. Adekanla said when Mr. Fowler was accused of mismanagement of funds at Federal Inland Revenue, he took a bow and subjected himself to investigation.

He however placed so much confidence in President Buhari led anti corruption drive.

He said the president does not support that men suspected of shady deal should occupy holy sanctuary like EFCC.

Adding that EFCC is a shrine of holiness where the officiating priests are supposed to be people without tainted integrity and blemished honour.

He summed his call for the removal of Bawa this way, “any person under criminal investigation like Bawa is the least person qualified to occupy the headship of EFCC Lagos Zonal office and I so hold that he should be unhorsed forthwith.

“I hereby urge the Federal Government to ask Mr. Bawa to step down from this exalted position of honour for holiness accountability and responsibility to reign.”

Casefileng.com however sought reaction to the allegation from the EFCC Spokeperson, Mr. Wilson Uwajaren, but he is yet to send his response.