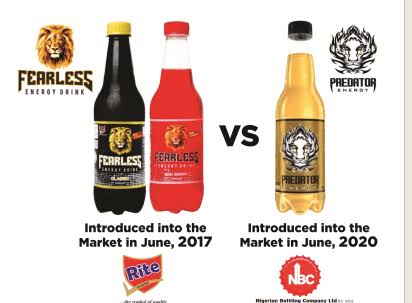 The Nigerian Bottling Company, NBC,  will on December 1, 2021 know its fate on the application filed to dismiss the contempt suit filed by Rite Foods against it and the  Managing Director, Matthieu Seguin over alleged trade mark infringement.

The matter is ongoing before Justice Lewis-Allagoa of a Federal High Court in Lagos.

In his motion on notice, he prayed for the order of court to set aside the committal proceeding in its entirety including all processess used by plaintiff in the proceedings.

NBC prayed the court to dismiss contempt suit and award punitive costs against Rite Foods if it finds no basis for the contempt proceedings.

In his response, the plaintiff’s counsel, Mr. Muyiwa Ogungbenro prayed the court to dismiss all application filed to set aside the contempt proceedings.

It could be recalled that Justice Chukwujekwu Aneke, had on September 27, 2021, upheld the objection filed by NBC’s counsel, suspending further hearing of Rite Foods’ case and discharged the exparte order granted Rite Foods against NBC and its Managing Director.

The NBC said that there has been no trade mark violation or passing off with its Predator Energy drink and maintains that the Predator brand logo had been in existence and in use in many markets even prior to the launch of Fearless by Rite Foods in the Nigerian market.