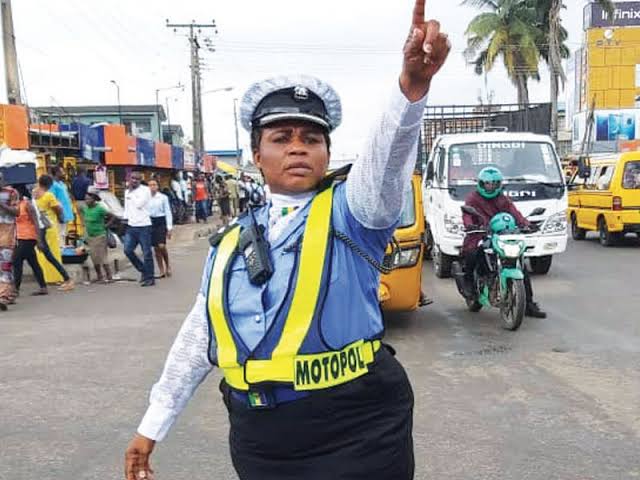 For blazing the trail in traffic management and control in Lagos, a Police woman who was found doing her work seamlessly and with dexterity has been recognised again.

For the umpteenth time, continuous recognition of her works and accolades are still streaming the way of CSP Oriyomi Titilayo Oluwasanmi.

Yet again, she has bagged another award on the heels of the CMC Africa Most Dynamic Police Officer of the Year 2021 award by CMC AFRICA.

Her latest is the Excellence Award in Traffic Management and Control conferred on her by Cornerstone Media.

This addition was presented to her on Friday in her Ikeja-Lagos office in the presence of some crime reporters led by Mr Christopher Oji.

Handing the award plaque to CSP Oriyomi, Evelyn Usman of the Vanguard Newspaper said she is deserving of the award having not rested on her oars.

Prior to this recognition, the award recipient achievements are worth noting as she received African Best Police Woman of the Year 2020 by PACM Foundation, Hall of Fame as Exceptional Traffic Police Officer of the Year 2021 by MSN Hall of Fame.

A grateful CSP Oriyomi said, “I am just doing my work the way I suppose to, for the recognition, I want to say thank you.

She re-emphasised her gratitude with an adage stating that any river that forgets it source will dry up.

“You people recognised me and picked me up when I don’t know what an award is.

“I also want to say thank you for showcasing me and advertising my work because I can be doing it and if you are not advertising it nobody will know.

“And I want to say thank you to you for giving us this award because I can not do it alone.

‘I want to dedicate this award to God Almighty, to all the officers and men that lost their lives to EndSARS.”

The beautiful officer, CSP Oriyoml Titilayo OIuwasanmi was born in Lagos in the early 70’s. She attended primary and secondary school in Lagos, and she is a graduate of Philosophy from Olabisi Onabanjo University, Ago-Iwoye Ogun State (then Ogun State University).

She observed her NYSC programme before she was enlisted into the Nigeria Police Force as a cadet Assistant Superintendent of Police in 2002.

She was trained at Police Academy Wudil Kano in Kano State, upon passing out from Academy, she was posted to Ekiti in 2004.

She was later posted to Lagos, she also had a Master degree in Leadership and Management from London School of Management in 2009.

CSP Oriyomi Titilayo Oluwasanmi also acquired skill in Community Policing with the British Council and DFID. She was the only woman among the first set of community policing trainer in Nigeria.

She also attended a professional in China as a skillful Police officer.

She has worked in various departments of the Nigeria Police Force as Admin Officer at new lyin Police station in Ekiti State as crime officer, as Alausa Police Station Lagos State, as divisional traffic officer in Lion building Lagos Island, where she bagged the award of the best traffic officer in Nigeria from Crime Reporters Association of Nigeria, CRAN, she was posted to llasamaja Division located within lsolo Local council area Lagos State in 2015 as the Divisional Police Officer, DPO, to her credit she was able to eradicate the menace of armed robbers and cultists within llasamaja community in 2016, she was the officer that arrested the armed robber that robbed Basketmouth and recovered 2 AK-47 rifles.

CSP Oriyomi is happily married and blessed with married.