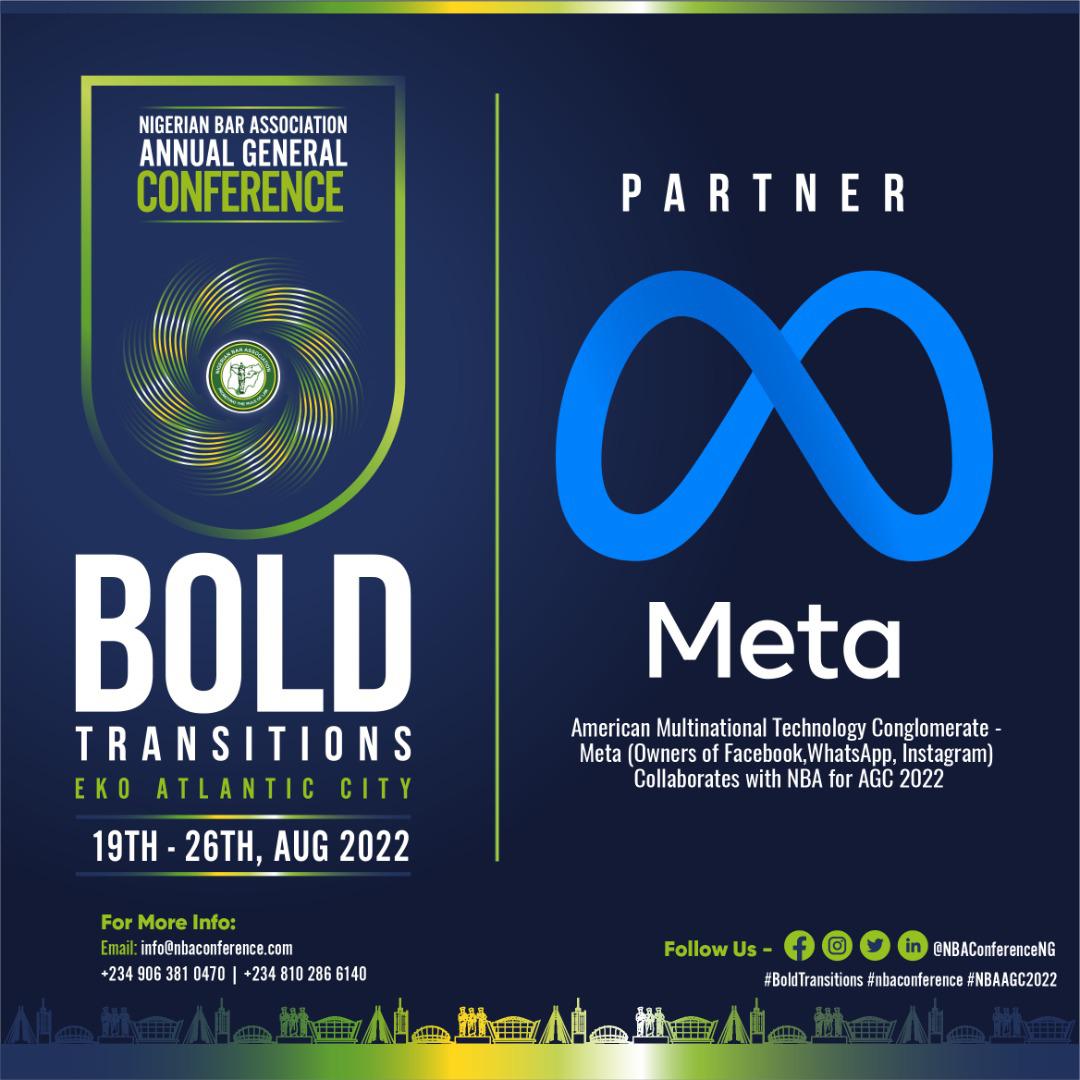 The American multinational technology conglomerate, Meta and owners of Facebook, Instagram and WhatsApp, will be sponsoring a tech conversation at the Nigerian Bar Association, NBA, Annual General Conference coming up in Lagos in August.

The NBA has also announced that Meta will also lead the tech conversation at the conference.

This was communicated on Friday by Tobenna Erojikwe, the Chairman, Technical Committee on Conference Planning.

Erojikwe said, “Excited to announce our collaboration with American multinational technology conglomerate – Meta (owners of Facebook, WhatsApp, Instagram). This collaboration is significant to the Nigerian Bar Association, NBA. Meta will be leading on the tech conversation at the conference.”

The conference, themed: “Bold Transitions,” will hold from 19th to 26th August 2022 at the Eko Atlantic City, Victoria Island, Lagos.

For an NBA leadership that has served as the catalyst for transiting the Association to a more vibrant, dynamic, and vivacious future, the collaboration with Meta does not come as a surprise.

Meta, one of the world’s most valuable companies which is considered among the Big Five American information technology companies, is in the business of doing bold things. The conglomerate builds technologies that help people connect, find communities, and grow businesses. Its Facebook, launched in 2004, heralded a bold transition as it changed the way people connect, while apps like Messenger, Instagram and WhatsApp further empowered billions around the world.

In October 2021, the parent company of Facebook changed its name from Facebook, Inc. to Meta in order to “reflect its focus on building the metaverse,” which, it said, refers to the integrated environment that links all of the company’s products and services.

On its part, the NBA, led by Olumide Akpata since August 2020, has initiated and implemented various bold initiatives, mainly focusing on the well-being of the individual lawyer. These include the Access to Finance Scheme; expansion of the health insurance scheme; expansion of the free subscription to Law Pavilion research platform; provision of free stamps; revitalisation of the NBA Institute of Continuing Legal Education, ICLE, to facilitate capacity building trainings for lawyers in various areas of legal practice, among others.

The NBA has also been a notable voice of reason on issues of national importance, especially issues bordering on the rule of law, abuse of human rights, passage of critical legislations, invasion of the homes of judges, kidnapping and insecurity, among other pertinent issues.

The Meta collaboration with NBA, for a conference themed: “Bold Transitions,” is a welcome development.